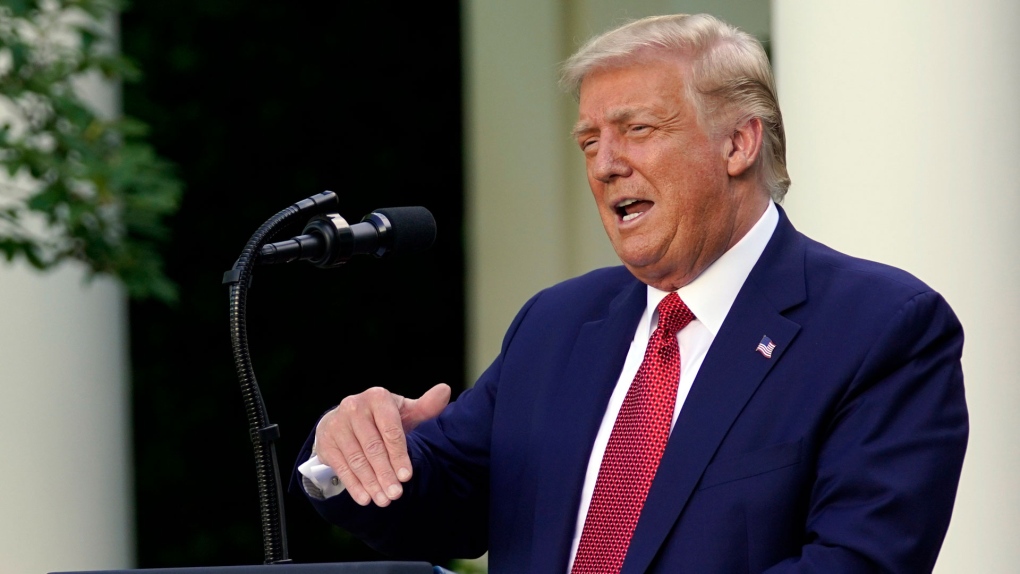 President Donald Trump speaks during a news conference in the Rose Garden of the White House, Tuesday, July 14, 2020, in Washington. (AP / Evan Vucci)

When asked by CBS News' Catherine Herridge why African Americans are still dying at the hands of law enforcement in the United States, Trump told the interviewer she had asked a "terrible question."

A federal study evaluating data on deaths between 2009 and 2012 due to lethal force by law enforcement found that a majority of victims were white, but a disproportionate amount were Black, with a fatality rate 2.8 times higher. The study also found that Black victims were more likely than whites to have been unarmed.

Trump's comment follows a summer filled with mass demonstrations across the country in the wake of George Floyd's death at the hands of police officers in Minneapolis.

National calls for policing reform led to Trump signing an executive order that, among other steps, creates a federal database of police officers with a history of using excessive force in June.

During the executive order signing, Trump did not address the racism issue directly. Instead, he offered a full-throated defense of police and suggested the repeated instances of officers killing unarmed Black Americans rested on a small number of individual officers.

"They're very tiny. I use the word tiny," he said. "It's a very small percentage. But nobody wants to get rid of them more than the really good and great police officers."

In recent weeks, Trump has primarily focused on praising the police, rather than addressing further potential reforms. This week, for example, the White House held a roundtable this week with Americans with stories of being assisted by the police.

Trump has also taken to criticizing Black Lives Matter and defending Confederate symbols. Earlier this month, the President called the Black Lives Matter movement a "symbol of hate," days after retweeting and then deleting a video that included a Florida supporter shouting "White power." The White House has maintained that Trump did not hear the supporter say the phrase.

As calls for reforms evolved, Trump leaned into protecting statues of Confederate icons and famous American slaveholders, going so far as to sign an executive order attempting to stiffen penalties for those who deface statues on federal land.

Trump told CBS News that he believes the Confederate flag is "freedom of speech" and compared it to the same freedoms of the Black Lives Matter movement.

Trump didn't directly answer whether he would approve of his supporters displaying Confederate flags, saying, "Depends on what your definition is but I am comfortable with freedom of speech. It's very simple."

But he expressed his explicit disapproval of NASCAR's decision to ban the Confederate flag from races, a week after the White House press secretary refused to denounce the flag and claimed the President was not "making a judgment call" about the flag in his tweet targeting driver Bubba Wallace.

In a separate interview on Tuesday with the conservative website Townhall, Trump defended a St. Louis couple who pulled their firearms on protesters on their way to a demonstration. The demonstrators were en route to protest outside the St. Louis mayor's residence, cutting through a private street in front of the couple's house, when the couple brandished their weapons.

"They were going to be beat up badly, if they were lucky, OK? If they were lucky ... and the house was going to totally ransacked and probably burned down, like they tried to burn down churches," Trump claimed. "And these people were standing there, never used it, and they were legal, the weapons, and now I understand somebody local, they want to prosecute these people. It's a disgrace."