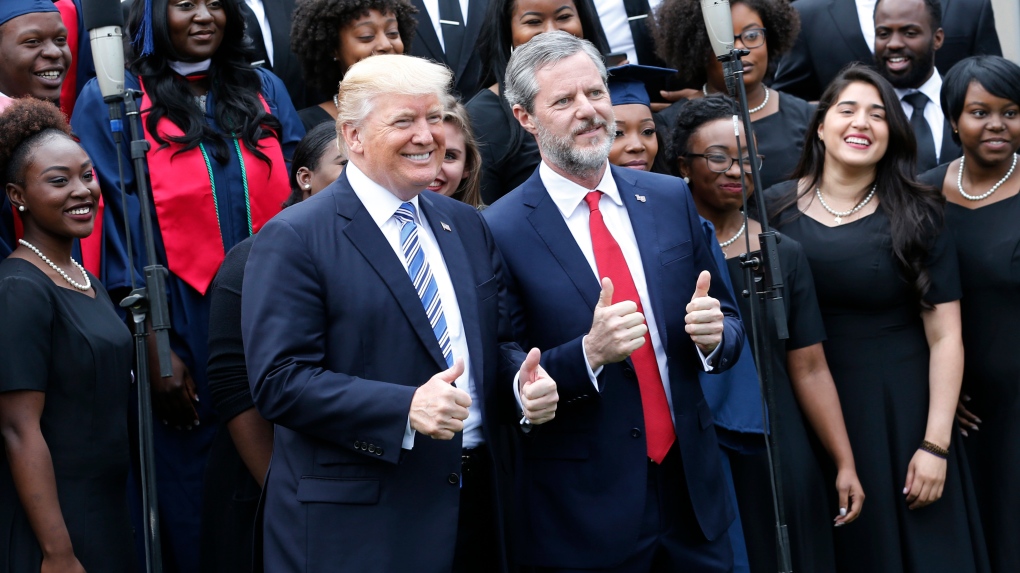 In this May 13, 2017 file photo, U.S. President Donald Trump poses with Liberty University president, Jerry Falwell Jr., center right, in front of a choir during of commencement ceremonies at the school in Lynchburg, Va. (AP Photo/Steve Helber, File)

RICHMOND, VA. -- Jerry Falwell Jr. took an indefinite leave of absence Friday as the leader of Liberty University, one of the nation's top evangelical Christian colleges, days after apologizing for a social media post that caused an uproar even among fellow conservatives.

The private university in Lynchburg, Virginia, gave no reason for Falwell's departure in a one-sentence announcement Friday afternoon. But it came after Falwell's apology earlier this week for a since-deleted photo he posted online showing him with his pants unzipped, stomach exposed and his arm around a young woman in a similar pose.

The statement said the executive committee of Liberty's board of trustees, acting on behalf of the full board, met Friday and requested Falwell take leave as president and chancellor, "to which he has agreed, effective immediately."

A high-profile supporter of U.S. President Donald Trump, Falwell has served since 2007 as president of the university founded by his evangelist father, the late Rev. Jerry Falwell.

He did not immediately return a call seeking comment. University spokesman Scott Lamb said he had no further comment.

In an interview this week with Lynchburg radio station WLNI, Falwell said the woman in the photo was his wife's assistant and that the picture was taken during a "costume party" while on vacation.

"Lots of good friends visited us on the yacht," the caption of the photo said, in part. "I promise that's just black water in my glass. It was a prop only."

He said the woman -- who also had her midriff exposed -- was pregnant, couldn't get her pants zipped and he imitated her, saying it was all in "good fun."

"I've apologized to everybody, and I've promised my kids ... I'm going to try to be a good boy from here on out," he told the interviewer.

On Thursday, Republican U.S. Rep. Mark Walker of North Carolina, a pastor who previously taught at Liberty, called Falwell's behaviour "appalling" and said he should resign.

Besides Walker, some pastors who graduated from Liberty spoke out this week calling for a change in leadership at the school. Mark Davis, a Texas-based pastor, tweeted that "the name of Christ and the reputation of Liberty will continue to be dishonoured" without action against Falwell by the board. Colby Garman, a pastor who has served on the executive board of the Southern Baptist Convention of Virginia, tweeted Monday that it was "bewildering" to see Falwell maintain the board's support. He responded to Friday's news with appreciation.

"How is this Jerry Falwell Jr. photo even real?" tweeted conservative TV personality Meghan McCain, daughter of the late U.S. Sen. John McCain. "Also if you're running the largest Christian university in America maybe don't put photos of yourself on social media with your pants undone on a yacht -- with random women in bad wigs. So gross, so hypocritical."

The late Falwell founded Liberty in 1971 with just 154 students. Under the leadership of Falwell Jr., who is an attorney and not a minister, Liberty has grown into a leading evangelical university, with an immaculate campus and a significant endowment. Students must follow a strict code of conduct that includes modest dress and a ban on alcohol consumption.

In recent years, Liberty has served as a regular speaking spot for ambitious Republicans courting the young evangelical vote. U.S. Sen. Ted Cruz kicked off a presidential campaign there in 2015.

Falwell was among the earliest Christian conservatives to endorse Trump's previous election campaign. In late 2016 he told The Associated Press that Trump had offered him the job of education secretary but that he turned it down for personal reasons.

Last year, he settled a federal lawsuit in Florida over a real estate venture that involved a young Miami pool attendant, a case that drew national attention.

He more recently sparred with Virginia Gov. Ralph Northam and local officials in Lynchburg over his handling of coronavirus restrictions. He also faced stinging criticism from a group of Black alumni who said in a letter that he should step down after he mocked Virginia's mask-wearing requirement in a tweet by invoking a blackface scandal that engulfed Northam last year. Several Black Liberty staff members resigned following the tweet, and several high-profile Black student-athletes announced transfer plans.

"Liberty University deeply impacted us as students and we hope that its leadership can return to a focus of training `young champions for Christ' with Biblical conviction for the Gospel and justice," the statement said.