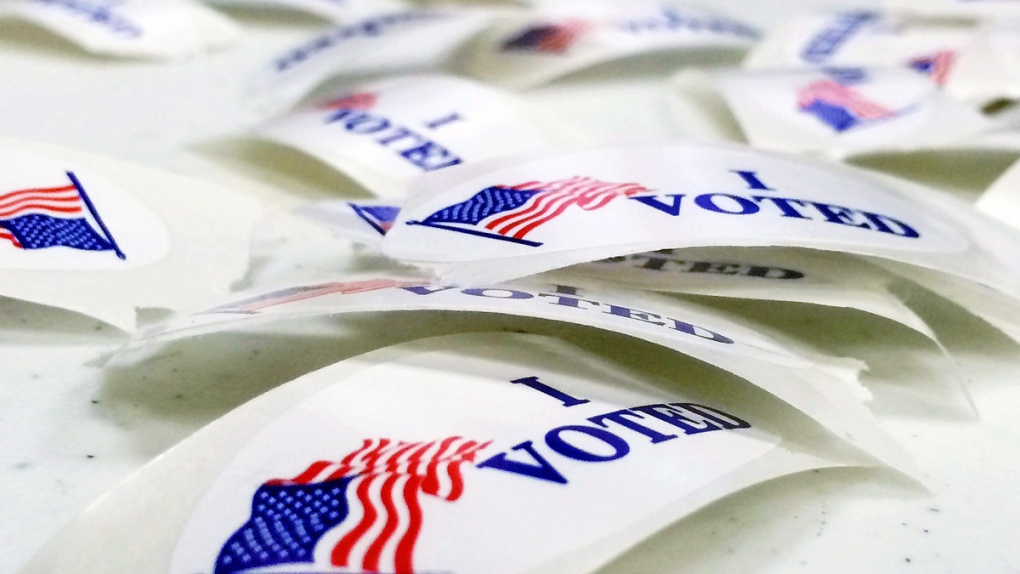 'I VOTED' stickers lie on a table in the Norton Shores Library in Norton Shores, Mich., on Nov. 4, 2014. (Tommy Martino / The Muskegon Chronicle via AP)

LANSING, Mich. -- U.S. president-elect Donald Trump's supporters moved Friday to prevent or halt election recounts in Michigan, Pennsylvania and Wisconsin, involving the courts less than two weeks before the states would have to complete the tasks to meet a federal deadline to certify their election results.

The legal actions seeking to block or halt the recounts in three states Trump narrowly won could cause delays that would make them extremely difficult or impossible to complete on time. Even if the recounts happen, though, none would be expected to give Democrat Hillary Clinton enough votes to emerge as the winner.

The recounts were requested by Green Party candidate Jill Stein, who says they're necessary to ensure that voting machines weren't hacked, even though there's no evidence that they were. Critics say Stein is simply trying to raise money and her political profile while building a donor database.

"Our goal is not to change the result of the election," Stein said in an opinion piece released Thursday. "It is to ensure the integrity and accuracy of the vote."

Wisconsin is the only state where a recount is underway. It began Thursday, and one of the state's 72 counties had already completed its task by Friday, with Clinton gaining a single a vote on Trump. Clinton lost to Trump in Wisconsin by about 22,000 votes, or less than 1 percentage point.

Two pro-Trump groups, the Great America PAC and the Stop Hillary PAC, along with Wisconsin voter Ronald R. Johnson went to federal court late Thursday to try and stop the recount. U.S. District Judge James Peterson on Friday rejected their request for a temporary restraining order to immediately halt the recount, saying there was no harm in allowing it to continue while the court considers their lawsuit. A hearing on the lawsuit is scheduled for Dec. 9.

The lawsuit says Wisconsin is violating the U.S. Supreme Court's 2000 Bush v. Gore ruling because it doesn't have uniform standards to determine which votes should be counted in a recount. They also argue that it threatens due process rights because it may not get done by the federal deadline to certify the vote, putting Wisconsin's electoral votes in jeopardy.

If states miss the deadline, Congress would allot their electoral votes.

Michigan's elections board deadlocked Friday on a Trump campaign request to deny Stein's recount request and on how a recount would be conducted. Both Republican members voted to prevent the recount while both Democrats voted to allow it, meaning it likely would begin Wednesday unless the courts intervene. It also would be conducted by hand, as Stein requested.

In separate lawsuits against the state, Michigan's Republican attorney general and Trump asked state courts to prevent the recount, saying Stein should not be allowed to seek one because she finished so far behind Trump and Clinton that she couldn't have won, even if some votes were miscounted. Stein got about 1 per cent of the vote in all three states.

The Michigan courts appeared unlikely to rule immediately, with one asking for a response from state elections officials by Tuesday.

In Pennsylvania, a hearing is scheduled for Monday on Stein's push to secure a court-ordered statewide recount there. Republican lawyers filed a motion that was posted on the court's website Friday accusing Stein of engaging in legal antics and saying her recount request endangers Pennsylvania's ability to certify its electors by the federal deadline.

Stein has argued, without evidence, that irregularities in the votes in all three states suggest that there could have been tampering with the vote, perhaps through a well-co-ordinated, highly complex cyberattack.

Elections officials in the three states have expressed confidence in their results.

Trump defeated Clinton in Wisconsin by about 22,000 votes, or less than 1 percentage point. His margin of victory in Michigan was even slimmer, at about 10,700 votes out of 4.8 million cast.

An updated count Friday by Pennsylvania election officials showed Trump's lead over Clinton in that state had shrunk to 49,000 from 71,000, as more counties wrap up final tallies. That put Trump's lead at 0.8 per cent, down from over 1 per cent, out of 6 million votes cast. It's still shy of Pennsylvania's 0.5 per cent trigger for an automatic statewide recount.