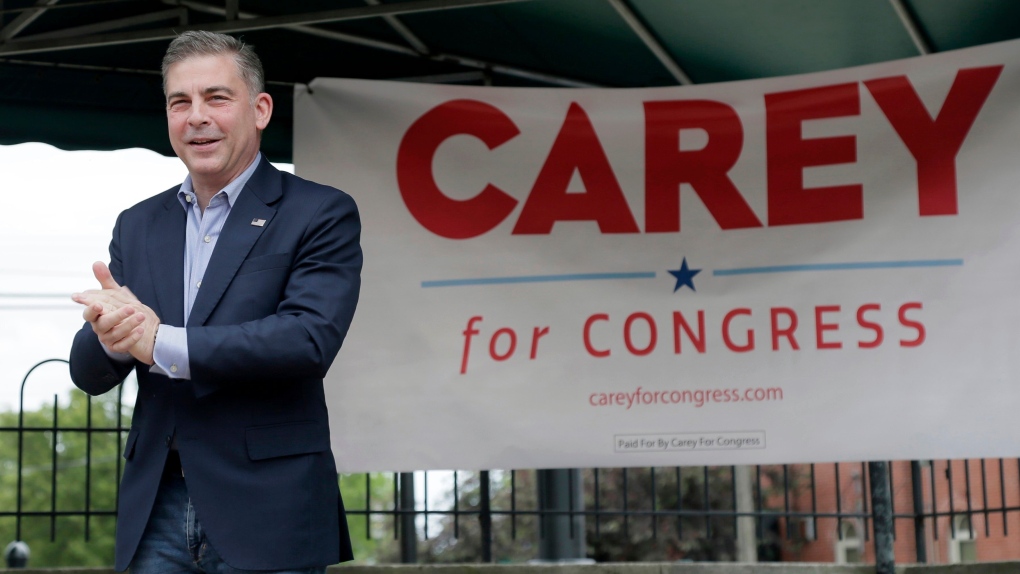 COLUMBUS, OHIO -- Mike Carey, a coal lobbyist backed by former U.S. President Donald Trump, beat a bevy of Republicans in central Ohio, while Cuyahoga County Council member Shontel Brown pulled out a victory for the Democratic establishment in Cleveland, in a pair of primary elections for open House seats Tuesday.

The special elections were both viewed as a measure of voters' influences, though low turnout and huge candidate fields complicated interpreting the results too broadly. In both races, party leaders showed they still held sway.

Turner, a leading national voice for Bernie Sanders' presidential campaigns, was for many months the best known and most visible among 13 Democrats running in the fiercely fought primary and the choice of Sanders, Rep. Alexandria Ocasio-Cortez and others.

But Brown, a centrist backed by Hillary Clinton, influential House Majority Whip Jim Clyburn, the Congressional Black Caucus, leading unions and many local leaders, prevailed after a surge in national attention to her campaign in July. In the heavily Democrat district, she is strongly favored in November over Laverne Gore, a business owner, consultant, trainer and community activist who won the Republican nomination.

In her victory speech, Brown said she has not sought "headlines or attention" in her nine years as a legislator, but effectiveness and making headway.

"Things I've done haven't gotten a lot of attention. They're not sexy," she said. "But I don't need the credit. I just need to make sure the people I have been called to serve are getting the resources they need. I'm not about lip service. I'm about public service."

Turner said she knew the campaign was an uphill battle.

"While we didn't cross the river, we inspired thousands to dream bigger and expect more," she said in a Twitter statement. "We couldn't overcome the influence of dark money, but we left our mark on OH11 and this nation."

The race came at a pivotal moment for the progressive movement. Centrists have been ascendant in the early months of the Joe Biden era, while the party's left flank has faced a series of defeats -- in New York City's mayoral race, a Virginia gubernatorial primary and a Louisiana House race.

Meanwhile, a contingent of moderates are worried that a leftward drift could cost the party seats in the next year's midterm elections. Biden hasn't heeded the left's calls for more aggressive action on certain issues, including voting rights and immigration.

That's left progressive leaders searching for new strategies that can bolster its influence. Turner would have added another voice to those efforts, but Brown successfully used her history of biting criticism of fellow Democrats -- she once likened supporting Biden to being forced to eat excrement -- against her.

The political newcomer Carey defeated a crowd of other candidates, including some with establishment backing and experience in state politics.

Carey's victory was also a win for Trump, who has prided himself on swaying elections -- sometimes in reality-show style interviews. He quickly celebrated Carey's win Tuesday in a statement.

"Thank you to Ohio and all of our wonderful American patriots," he said. "Congratulations to Mike and his family. He will never let you down!"

Democratic U.S. Sen. Sherrod Brown tweeted Democrats will "get to work to elect a champion for Ohio working families this November."

The GOP result was a blow to former U.S. Rep. Steve Stivers, a moderate Republican who retired from the seat in May and endorsed state Rep. Jeff LaRe, a security executive with law enforcement experience, in the race.

But Stivers pledged he'd support Carey this fall and LaRe called for Republican to "all work together to keep central Ohio red for decades to come."

Tuesday's results come as recent polling shows Democrats are generally upbeat about their party's future and the sitting Democratic president, Joe Biden, while the AP-NORC poll reflected widespread unease among Republicans over everything from the direction of the country to the state of American democracy and the job Biden's doing.

All of the candidates in the Columbus-area GOP primary billed themselves as conservatives and many boasted more legislative-branch experience than Carey, including LaRe, state Sens. Bob Peterson and Stephanie Kunze and former state Rep. Ron Hood. In the end, they divided the vote and left Carey with only 37% of the vote to win.

By contrast, with nearly all votes counted, more than 94% of votes in the Cleveland-area 11th District voted for either Brown and Turner, dividing the rest among the other 11 candidates.