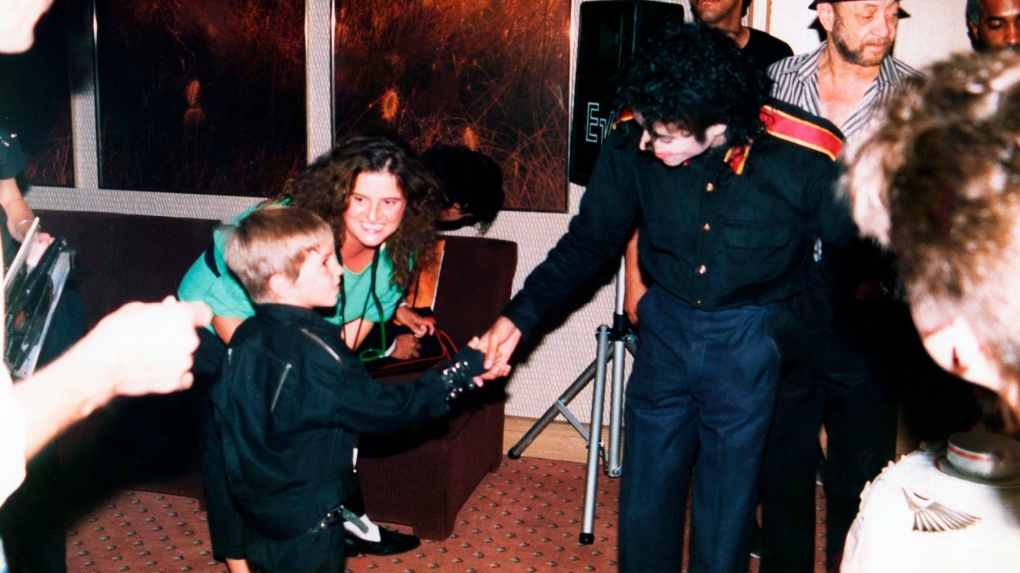 This image released by HBO shows a young Wade Robson shaking hands with pop icon Michael Jackson in 1987, in a scene from the documentary "Leaving Neverland." (Dan Reed/HBO via AP)

An aunt who introduced her underage niece to R. Kelly and suspects abuse said in the six-part "Surviving R. Kelly" docuseries on Lifetime that she hoped the embattled star would propel the teen's music career. She alleges the girl wound up on a sex tape instead.

The parents of a 12-year-old girl kidnapped twice and chronically abused over several years by a trusted neighbour in Idaho called themselves "naive" in the Netflix documentary on the bizarre 1970s ordeal, "Abducted in Plain Sight."

The trio of high-profile cases, the latest in a long line of media fare focused on child abuse over the years, have generated intense scrutiny of the people who should matter most to kids: their parents.

For those in these sad and painful documentaries, support and understanding have been abundant among strangers, abuse survivors and advocates fighting sexual violence. However, some viewers and commenters online, likely many who know nothing of how sexual abusers groom their victims, can't fathom how any parent could allow a child to be placed in the intensely vulnerable situations depicted.

There were missed red flags. Mistakes made and acknowledged. There were professional ambitions to be pursued for their starry-eyed kids, murky monetary payments and plenty of perks. And there was lots of regret once their children disclosed.

Experts, abuse survivors and their supporters said that when young victims are groomed by perpetrators so, too, are their parents in a vast majority of cases that don't include such crimes committed by parents themselves.

"The basic facts are that somebody who's intent on sexually abusing a child does actually groom both a child and a caregiver," said Esther Deblinger-Sosland, who has written two books on the subject and is a psychology professor and co-director of the Child Abuse Research Education Service Institute at Rowan University in Glassboro, New Jersey.

"They're looking for situations and families that they can exploit. Any child can be sexually abused. That has to be put out there. It really could happen to any child. But when an offender is really looking to target a child, they do look for a child that might be more vulnerable, from a family that they think they might be able to manipulate in some way," she said.

Parents may be coping with stresses and adversities that distract them, Deblinger-Sosland explained, but at the same time, "most people don't assume anyone who talks articulately, who appears to be friendly and caring, is a sex offender."

Child sex offenders, she said, are often viewed by society as the "most heinous criminals," she said. "If you have that image of a sex offender then it's unlikely, whoever you are, to just look at someone and assume that they're going to sexually abuse your child. And that's what's so difficult."

Jackson, who died in 2009, was found not guilty in a 2005 trial of 14 charges alleging he had molested a boy, at times in the presence of the boy's brother. While acknowledging that he befriended numerous children, including some he invited into his bed, he denied molesting any. His two accusers in "Leaving Neverland" allege that they were 7 and 10 when the abuse began. Now in their 30s, they appear in the docuseries with their mothers.

Loyal Jackson relatives and fans object to the one-sided nature of the unsparing two-part documentary, which aired March 3-4 and is HBO's third most-watched documentary of the past decade.

The R. Kelly series aired over three nights in January. By late February, he had turned himself in on 10 counts of aggravated sexual abuse involving four victims, including at least three between the ages of 13 and 17. He denies the charges. A jury in 2008 acquitted Kelly of 14 counts of child pornography after concluding they couldn't verify a female in a sex video with the singer was underage.

Two women currently live with Kelly in Chicago and say they are his girlfriends, including 21-year-old Azriel Clary. Both have said in interviews they are willingly by his side, but their parents remain unconvinced.

"I feel like I failed my daughter because I should have saw different signs," Clary's father, Angelo Clary, told Gayle King on "CBS This Morning."

He added: "I should have saw the change in my baby girl instead of the love that we instilled in her, that she was showing us and putting on a charade. So, guess what? We can take responsibility. But to the world, how much responsibility did R. Kelly take?"

As for Jan Broberg Felt, the now 56-year-old survivor who appears with her parents in "Abducted in Plain Sight," the neighbour who sexually abused her died in an apparent suicide decades later. During her teen years, he slowly drew both of her small-town, churchgoing parents into situations he knew they would be ashamed to reveal, including having sex with the mother and convincing the father to perform a sex act on him.

Shaming or condemning the parents of child victims is one of those things "offenders exactly want to happen," said Deblinger-Sosland and other experts. "They want the blame to be not on them."

A majority of offenders are known to child victims and their families. When a child discloses sexual abuse, Deblinger-Sosland said, they often do so to their mothers. Years after that happened in the case of James Safechuck, one of the Jackson accusers, his mother, Stephanie Safechuck, said in "Leaving Neverland" of their years in the superstar's life:

Although statistics vary, generally 1 in 9 girls and 1 in 53 boys under the age of 18 experience sexual abuse or assault by an adult, according to the non-profit RAINN, for the Rape, Abuse and Incest National Network.

In fiscal year 2016 alone, child protective services agencies substantiated or found strong evidence to indicate that more than 57,000 children were victims of sexual abuse in the U.S., the organization said. That, experts said, is just a small portion of such cases overall.

Psychologist David Wolfe of the Centre for Research and Education on Violence Against Women and Children at Western University in London, Ontario, also works as an expert witness in mostly civil court cases involving child sexual abuse allegations.

Whether they're dealing with a trusted coach, priest or neighbour, Wolfe said, parents of victims are making decisions as abuse plays out based on non-threatening interactions with a perpetrator, or in the case of Safechuck and others, once-in-a-lifetime opportunities for their children.

In 1986, when he was 10, Safechuck was chosen to appear in a Pepsi commercial with Jackson. The psychology involved for parents in such a scenario is common, Wolfe said.

"I put myself in that position and think, what would I have felt like if my son was the one that was in the commercial and gets invited to Neverland?" he said. "I would have thought that was pretty cool, I'd like to do that. At what point does a parent say, maybe this isn't the way I thought it was. Maybe he wants something that I didn't see. It's very tough to go back on your decision and say I've been led down a path here. Someone else may point it out and say, are you sure you want your kid over there? You're going to defend your choice because otherwise you'd look stupid."

Robin Gurwitch, a professor in psychiatry and behavioural sciences at Duke University in Durham, North Carolina, is an expert in understanding and supporting children in the aftermath of trauma and disasters. In the case of high-profile child sexual abuse perpetrators, the feeling of being singled out for special treatment -- parents and children alike -- makes parents vulnerable to missing warning signs that might seem obvious to others, she said.

"Parents are trusting of people who are important in their child's life."