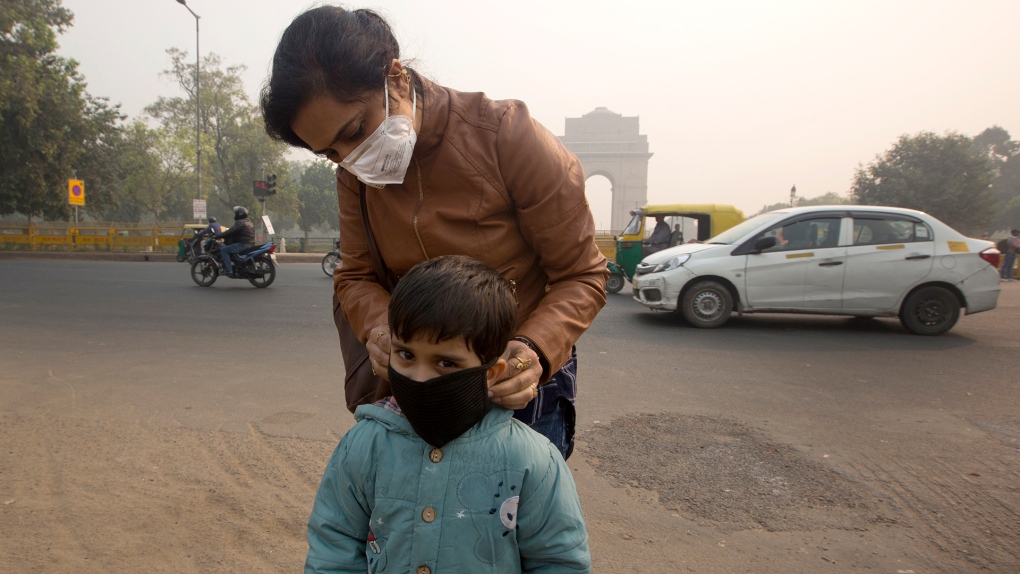 An Indian mother puts a mask to her son a day after Diwali festival in New Delhi, India, Thursday, Nov. 8, 2018. (AP / Manish Swarup)

NEW DELHI -- Toxic smog shrouded the Indian capital as air quality plummeted to hazardous levels Thursday after tens of thousands of people set off a multitude of firecrackers to celebrate the major Hindu festival of Diwali.

With schools closed for holidays, many young children stayed indoors to escape the pollution levels in New Delhi that shot up to 681, as reported by the U.S. Embassy Thursday morning from 200 a day earlier. That measurement of small particulate matter in the air is 20 times higher than what's considered safe by the World Health Organization and could seriously aggravate heart or lung diseases.

The government blamed the toxic stew on a combination of burning of stubble in agricultural fields and firecrackers. The Indian Institute of Tropical Meteorology said an increasing surface wind speed is expected to disperse pollutants in two to three days.

Rias Ahmed, an auto rickshaw driver, said it was highly unlikely that air pollution was going to decrease in and around the Indian capital.

"I have been driving an auto rickshaw since 1994, for 24 or 25 years, and it has been very difficult due to the high pollution. Sometimes when we clean our nose, it's all black. When we spit or cough, that's all black. This is a problem."

Mohammad Shahid Raza, a young student, said people let off firecrackers until 1 a.m. Thursday in a south Delhi neighbourhood where he lived. "It was very noisy, and on top of that the pollution level was so high, that when I went outside my house to buy some water, I could see dark clouds, and everything was completely dark. This is not good."

Authorities this week tried to reduce dust by sprinkling water in many neighbourhoods and ordering builders to cover construction sites. Coal-based power stations in the Indian capital region have been shut down.

The transport department was checking buses entering the region for valid emission papers and threatening to punish violators. The government has banned diesel vehicles that are more than 10 years old. On Wednesday, it banned the entry of diesel-run trucks into New Delhi from Nov. 8-10 to control the pollution levels. Only those bringing food supplies and vegetables are being allowed.

Crop burning peaks in early November as farmers prepare their fields for sowing winter crops, mainly wheat. They have been ignoring government warnings of a penalty, saying they can't afford to buy harvesting machines.

The Central Pollution Control Board is considering cloud seeding to induce artificial rain to the air wasn't clearer by next week, the Press Trust of India reported.