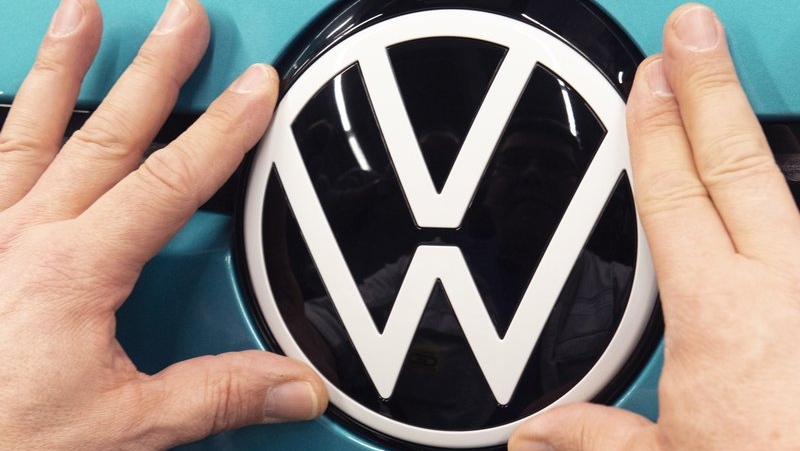 A worker completes an electric car ID.3 body at the assembly line during a press tour at the plant of the German manufacturer Volkswagen AG (VW) in Zwickau, eastern Germany, Tuesday, Feb. 25, 2020. (AP Photo/Jens Meyer)

KARLSRUHE, GERMANY -- A top German court ruled Monday that Volkswagen must buy back a diesel car it modified to appear less polluting, a decision that could influence the outcome of tens of thousands of other "dieselgate" cases.

Judges at the Federal Court of Justice (BGH) in Karlsruhe "effectively upheld" a lower court's ruling that plaintiff Herbert Gilbert can return his car to VW for reimbursement, but he must also accept a discount from the original purchase price for the time he used it.

Almost five years after Volkswagen's admission to cheating on emissions tests involving millions of diesel engined cars, the ruling is the first real legal setback for VW in its home country.

"Volkswagen now aims to soon bring these cases to a close in agreement with the plaintiffs," the company said in a statement, promising "appropriate offers" to affected owners.

"This judgement means legal certainty for millions of consumers and shows once again that even a huge corporation isn't above the law," Gilbert's lawyer Claus Goldenstein said in a statement.

Lead judge Stephan Seiters revisited the familiar story of how VW "for many years systematically brought vehicles onto the market whose software was programmed so that they only met (emissions) limits under test conditions".

Judges said the mere fact of selling the modified car to the plaintiff harmed him -- even though VW has always argued the vehicles were "usable" for their intended purpose.

Monday's hearing specifically concerned a case brought by 65-year-old Gilbert who bought a diesel-powered Volkswagen Sharan minivan in 2014 -- just one of the 11 million cars worldwide fitted with emissions cheating software by the carmaker.

The judges in Karlsruhe largely confirmed a lower court's finding in favour of Gilbert, ordering VW to pay around 25,600 euros (US$27,887) and accept his return of the car.

That payout, however, is almost 6,000 euros below the original purchase price, as the judges took into account depreciation of the vehicle's value.

Both VW and Gilbert had appealed to the BGH, with the company disputing the grounds for reimbursing the pensioner while the plaintiff said he should be paid the full purchase price.

If extended to the thousands of similar cases, such discounts on the value of returned vehicles will limit the potential financial blow to VW.

The end of April also brought the closure of a mass lawsuit against the carmaker by hundreds of thousands of plaintiffs, the first of its kind and one of the biggest legal risks stemming from "dieselgate.”

VW will pay out at least 750 million euros to 235,000 drivers under an out-of-court settlement reached with consumer representatives, well below the amounts paid out in the United States.

Buybacks, fines and compensation payments in the U.S. alone account for most of the more than 30-billion-euro cost of the scandal to the manufacturer so far.

NOT OUT OF THE WOODS

VW said it would offer one-off payments even to those who want to keep their cars, and added that some details remained to be cleared up, like whether those who bought vehicles after the diesel scandal came to light in September 2015 were eligible.

"We are convinced that plaintiffs have no claim if they ought to have known about the (cheating software)," the company said.

On the criminal side, present chief executive Herbert Diess and supervisory board boss Hans Dieter Poetsch are off the hook on charges of market manipulation from Brunswick prosecutors, after VW this month paid a total of nine million euros to settle the charges.

But a case remains open against Martin Winterkorn, VW CEO at the time the diesel cheating was uncovered, as well as Rupert Stadler, former chief of subsidiary Audi.

A major court case also continues by investors demanding compensation for their VW shares' plunge in value after "dieselgate" came to light.