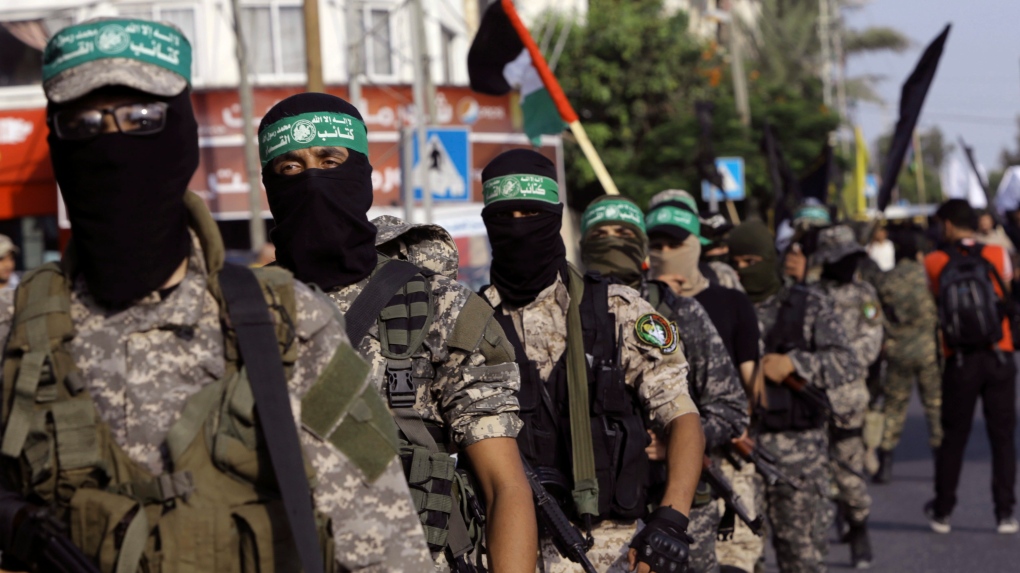 Masked militants from the Izzedine al-Qassam Brigades, a military wing of Hamas, march with their rifles during a parade against Israeli arrangements in a contested Jerusalem shrine, along the streets of Gaza City, Tuesday, July 25, 2017. Muslim leaders urged the faithful Tuesday to keep up their prayer protests and avoid entering a contested Jerusalem shrine, even after Israel dismantled metal detectors that initially triggered the tensions. (AP Photo/Adel Hana)

BRUSSELS -- The European Union's top court ruled Wednesday that Islamic militant group Hamas should stay on the EU terror list, saying a lower court should not have ordered the group removed from the EU's terror list and sending the case back to the lower court for reconsideration.

The EU originally listed Hamas as a terror group in 2001, a move that froze assets of the organization in the European Union. However the decision was annulled on procedural grounds by an EU court in 2014.

The EU appealed and Wednesday's ruling by the European Union Court of Justice said that the 2014 annulment was wrong and must now be reconsidered taking into account arguments not ruled upon in the original decision. However, it added that Hamas funds will continue to be frozen pending the outcome of the reconsideration.

Neither Hamas nor Israel had an immediate reaction.

In May, Hamas issued a new policy document in a bid to rebrand itself with softer positions. In the new document, Hamas said it accepts a Palestinian state alongside Israel, a departure from the founding charter which envisioned that state in place of a defeated Israel.

At the same time, Hamas also upheld its right of armed resistance against the Israeli occupation, noting that its fight is against occupation, not Jews.

The group's president, Moshe Kantor, said it "sends a clear message that those who oppose peace in the Middle East by acts of murder and terror have no place within the European Union."

In another terror listing case Wednesday, the court upheld a decision ordering the removal of the Sri Lankan rebel group Tamil Tigers from the terror list. The organization, formally known as the Liberation Tigers of Tamil Eelam, was put on the list in 2006, but the group was defeated by Sri Lankan forces in 2009.