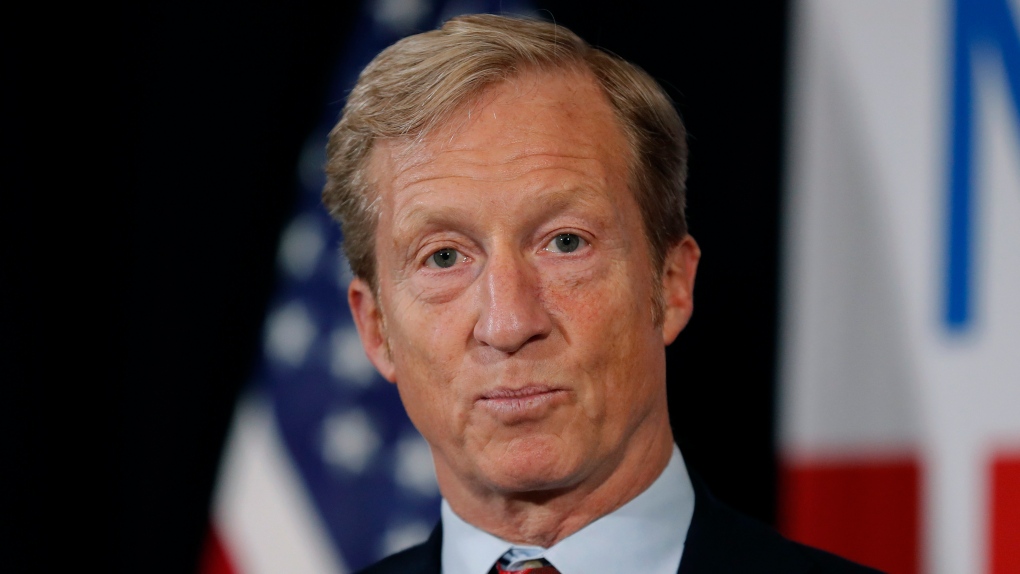 In this Jan. 9, 2019 file photo, billionaire investor and Democratic activist Tom Steyer speaks during a news conference where he announced his decision not to seek the 2020 Democratic presidential nomination at the Statehouse in Des Moines, Iowa. (AP Photo/Charlie Neibergall)

WASHINGTON -- Tom Steyer, the billionaire investor and activist, said Tuesday he's joining the race for the Democratic presidential nomination, reversing course after deciding earlier this year that he would forgo a run.

Steyer, 62, is one of the most visible and deep-pocketed liberals advocating for President Donald Trump's impeachment. He surprised many Democrats in January when he travelled to Iowa, home to the nation's first presidential caucus, to declare that he would focus entirely on the impeachment effort instead of seeking the White House.

Since then, Steyer, of California, has said he's grown frustrated at the pace at which the Democratic-controlled House is approaching Trump. Roughly half of the Democratic presidential contenders, seeking to appeal to the party's progressive base, have called on House Democrats to start an impeachment inquiry. But Speaker Nancy Pelosi has resisted, warning that Democrats need to collect the facts and that a rush to impeachment could ultimately help Trump politically.

Despite becoming a national voice on the impeachment issue, Steyer made no mention of it in his campaign announcement. Instead, he said his campaign will focus on reducing the influence of corporations in politics. He also plans to target climate change, which is the focus of the Steyer-backed advocacy group NextGen America.

"The other Democratic candidates for President have many great ideas that will absolutely move our country forward, but we won't be able to get any of those done until we end the hostile corporate takeover of our democracy," Steyer said in a statement.

Steyer confirmed to The Associated Press on Tuesday that he would spend at least $100 million on his campaign, a figure that was first reported by The New York Times.

Sens. Elizabeth Warren of Massachusetts and Bernie Sanders of Vermont, who are competing for the support of liberal voters in the Democratic presidential primary, decried the influence of billionaires in the 2020 race.

Warren, who didn't mention Steyer by name, tweeted after his announcement: "The Democratic primary should not be decided by billionaires, whether they're funding Super PACs or funding themselves. The strongest Democratic nominee in the general will have a coalition that's powered by a grassroots movement."

Sanders said that while he may "like Tom personally," he is "a bit tired of seeing billionaires trying to buy political power."

Asked about Warren's and Sanders' criticism of his plan to invest so heavily in his own campaign, Steyer said the common goal among all candidates is to present a vision that connects with voters.

"That's what Americans are waiting for, that's what's missing, and that's something that every single candidate, including Sen. Warren and Sen. Sanders, have to address," he said. "And so, if I can't do that, all the money in the world isn't going to help me."

As he seeks the presidency, Steyer is resigning his leadership positions in both NextGen America and Need to Impeach. He says he has committed more than $50 million through 2020 to the two organizations.

Steyer joins the race three weeks before the next presidential debates , and he could struggle to get a spot on the stage. He told the AP that he does not expect to qualify for the second Democratic presidential debates, which will be held July 30-31 in Detroit.

"We're serious about making the debates in September and October, but I think we're too late to make the July one," he said.

There are 20 spots at the debate for a field that includes two dozen candidates . If more than 20 people qualify, the Democratic National Committee will hold a tiebreaker to determine who gets on stage.

The sprawling Democratic field is in flux as Steyer becomes the newest contender. Some lower-tier candidates are facing increasingly dire prospects if they don't secure spots on the debate stage this fall.

California Rep. Eric Swalwell exited the race on Monday , and former Colorado Gov. John Hickenlooper's campaign has undergone a shake-up after his debate performance last month, with some staffers encouraging him to consider a Senate campaign instead.

This is not the first time Steyer has considered running for office. He eyed bids for governor of California in 2018 and the Senate in 2016. His net worth, according to Forbes, is estimated at $1.6 billion.