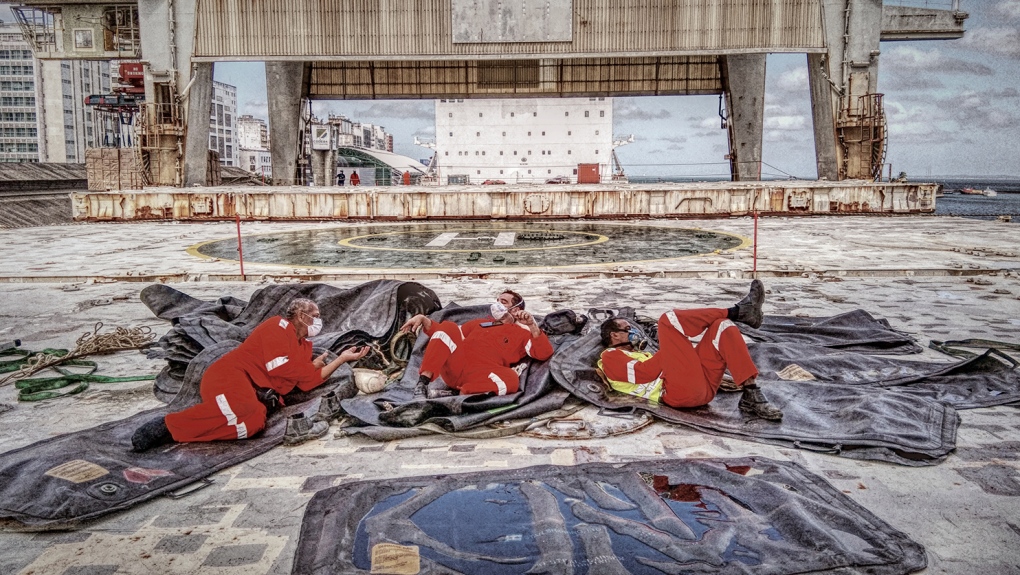 WASHINGTON, D.C. -- Hidden behind the tragedy of the deadly explosion in Beirut is a dark and pervasive travesty that began in 2013 and explains how the 2,750 tons of explosive ammonium nitrate ended up in that fateful portside warehouse.

This perhaps more important story sheds light on the deeper problem of maritime abandonment of ships, seafarers and cargo, and the factors that make it so easy for vessel owners and operators to walk away from their responsibilities usually with impunity, and often with life-or-death consequences for the crew that gets left behind.

Lebanese investigators now speculate that fireworks stored nearby the flammable dunes of powdery chemical that was housed in Hangar 12 triggered the explosion that sent a shockwave levelling buildings and shattering windows throughout the city. Killing at least 190 people, injuring more than 6,500, and leaving some 300,000 others homeless, the blast was so powerful that it created seismic waves equivalent to a magnitude 3.3 earthquake, and was reportedly heard and felt in Cyprus, some 240 kilometres across the eastern Mediterranean.

But the real causes of this explosion stem from slower-moving and less dramatic factors: corporate negligence and political corruption, anemic enforcement by shady flag registries that are supposed to hold shipowners accountable, tightened immigration controls that routinely trap stranded crews on decrepit ships, lax rules and a maritime bureaucracy designed more to protect anonymity and secrecy of ship owners than to enable oversight and transparency of the industry.

This broader story begins on a barely-seaworthy, Russian-owned ship flagged to Moldova called the Rhosus that was transporting tons of the volatile and odorless crystalline substance from Georgia to Mozambique in 2013. Manned by 10 Ukrainians and one Russian, the rusty freighter was stopped by Lebanese port authorities who deemed the vessel unsafe to continue its journey.

Refusing to answer urgent calls from the crew or port authorities, the ship’s owner, a Russian man named Igor Grechushkin, was soon confronted with heavy fines, including roughly US$100,000 in back wages and port fees. In response, Grechushkin did what many shipowners do. He cut his losses, declared bankruptcy, and quietly disappeared, abandoning his workers, the dilapidated ship and its deadly cargo.

That Grechushkin could disavow his duties so easily is a consequence of the labyrinthine elements of maritime law and administration, and the distinctly transient and trans-national nature of the industry. Lebanese authorities were hard pressed to arrest Grechushkin or seize his property since he lived not in Lebanon but in Cyprus, and his shipping company, Teto Shipping Ltd., was registered on the Marshall Islands.

NO MONEY, NO WATER, NO FOOD

Meanwhile, the men left onboard the Rhosus found themselves in a bind that is surprisingly common for seafarers around the world. Lacking clean water, fuel, or food, not to mention cell service, legal help or the ability to speak local language, these men had no money to get home nor even the immigration papers allowing them to disembark.

On any given day, hundreds of ships and thousands of seafarers are in the same situation. Port officials like those in Beirut have little power to repatriate abandoned crews or ships when they are left behind. Usually cargo gets sent to its rightful owner because it travels with insurance but the men who work on board are rarely as lucky.

The plight that befell the crew of the Rhosus is illustrative. After several weeks stuck in port, the majority of the men were safely repatriated. But the captain and three of the crew members were forced to stay aboard and, for the next year, they were stuck as immigration restrictions prevented them from heading home. While they waited, these men warned Lebanese authorities that the ship's cargo posed a serious safety risk to them and the public. On September 14, 2014, the final Rhosus seafarers made it home, with help from their lawyers and the International Transport Workers' Federation (ITF), which is the largest global seafarers union.

The problem of abandoned ships rarely gets public notice. But over the past six years while reporting on crimes at sea, I’ve stumbled across hundreds of these dire predicaments.

Take for instance the 16 men stuck on the Zoya 1, a supertanker that in April 2018 had been trapped off the coast of the U.A.E for over a year and were owed more than four months’ salary. Languishing on board a ship overrun with vermin, the men slowly fell apart, physically and mentally. Unable to disembark, several of the men who were unable to swim tried to die by suicide by jumping overboard. In a photo taken at the time, crew members held signs that said, "We are helpless. We did not commit any crime." The crew was repatriated in June 2018.

Such cases are not uncommon. A database created by the ITF and international labour section of UN indicates that nearly 5,000 seafarers were abandoned on their vessels in nearly 400 separate incidents between 2004 and 2018. On any given day, more than a million seafarers, mostly migrants from poor countries, work on 55,000 ships globally. While on board their ships, these crews are truly divorced from many of the protections enjoyed by most workers from on-land industries and they are at the mercy of decisions passed down by port state officials, such as shipping companies, port managers and immigration authorities.

“Food, water, oil,” said Ben Bailey, director of advocacy for The Mission to Seafarers. “It’s difficult for us to get supplies to these men.” He added that the problem of abandonment has become more severe during the COVID-19 pandemic as global maritime commerce has ground to a halt. In June, the United Nations called upon maritime governments to allow hundreds of thousands of seafarers stranded in ports due to COVID-19 travel restrictions to safely change over to other ships or return to their home countries.

In the Port of Beirut, for example, not far from the warehouse that exploded this week, an oil tanker called the Captain Nagdaliyev was abandoned with 13 seafarers on board. When the vessel was inspected on July 20 of this year, the crew had not been paid in six months and they lacked clean drinking water. These men were still stuck on board their ship in the Beirut port at the time of the explosion, which ripped off a door from their vessel, before they escaped to safety.

As the Beirut explosion made clear, such abandonment is not just a concern for the workers in ports or on ships but also for the wider public. The explosion has turned global attention to another and potentially worse crisis emerging elsewhere in the Middle East. The FSO Safer, a tanker off the coast of Yemen formerly used as a floating oil storage facility, was abandoned after its Yemeni owner sustaining the ship stopped operation due to the war. Located in one of the world’s busiest shipping routes, this floating bomb is located kilometres offshore, but its explosion could cause massive environmental damage and impede marine traffic traveling through the Red Sea, Bab el-Mandeb strait, and the Suez Canal.

Similarly, environmentalists and union officials have warned of a possible disaster tied to an abandoned ship 13 miles off the coast of the Philippines in Manila Bay. A crew of 15 have been stuck on the Spanish tanker MV Celanova since February 2. Loaded with liquid petroleum gas, the tanker lacks enough fuel to keep the cargo refrigerated and port officials warn there is imminent risk of fire.

Internationally, there are strict rules mandating that ammonium nitrate should not be stored near fuels or sources of heat. In the United States, regulations over ammonium nitrate were tightened significantly after the Oklahoma City bombing of a federal building in which 168 people died.

Lebanese port officials, on the other hand, had their hands tied in dealing with the highly explosive material left floating in their waters. Grechushkin’s silence made it especially difficult for these authorities to auction off the ammonium nitrate left on the ship. At some point between July 2014 and October 2015, the ammonium nitrate was moved to the portside alongside the country's main north-south highway, where it remained until the catastrophic explosion.

There is no shortage of blame to share for what happened this week in Beirut. Surely, corruption and ineptitude within the Lebanese government played a role. Customs authorities repeatedly tried to get permission from local judges to allow them to seize so they could export the ammonium nitrate or to hand it over to the Lebanese Army rather than store it dangerously in the port warehouse. Their urgent letters went unanswered for years.

Port officials globally have a tough time preventing the abandonment of ships or seafarers partly because of the opaque way that the shipping industry polices itself. For centuries, the world’s merchant fleets flew the flag of the country of their home port. That country was responsible for ensuring the proper treatment of the crew and safety of the vessel. This began to change in the early twentieth century with the emergence of “open registries,” also called “flags of convenience.”

The company collecting fees for the right to fly a certain flag is also responsible for policing its customers, ensuring they abide by safety, labor, and environmental rules, and conducting investigations when things go wrong. But in practice, flags of convenience create a perverse incentive for ship operators to shop around for the most lax registries with the lowest prices and fewest regulations.

The Rhosus, for instance, was flagged to Moldova, which at least since 2013 has been on a black list that is run by Paris MoU, an international naval organization that monitors and regulates maritime traffic in European waters. The organization labelled Moldovan-flagged ships as “medium to high risk” due to the number of times their ships have been inspected or detained in the past three years.

'WE NEED TO SEE GREATER ENFORCEMENT'

The media is also complicit. Dramatic disasters like the deadly Beirut explosion reflect acute problems and typically grab press attention. Slow-motion tragedies and bureaucratic crimes of neglect like those that preceded the Beirut explosion rarely get covered, even though the ruinous impact is often as severe. When abandoned seafarers do make it home they usually face crushing debt due to the unpaid wages and the money they borrowed to get this job at sea. Their maritime licences expired, they are often also blacklisted by the local employment agencies that control access to jobs.

In speaking with reporters after the explosion, U.S. President Donald Trump cited the cause as likely a bomb. Early speculations hinted at Israel targeting an attack of a nearby weapons depot belonging to Lebanese political party and militant group Hezbollah but the Israeli government has denied any involvement.

Lebanese investigators now say that gross criminal negligence not terrorism is more likely to blame and that the ignition source was potentially fireworks that were stored nearby. “Those responsible for this catastrophe will pay the price,” Lebanon's Prime Minister Hassan Diab said.

Still, the deeper problem that will likely get less attention is how to handle shipowners who walk away from their ships and crews. “We need to see greater enforcement of the abandonment amendments contained in the Maritime Labor Convention,” said Bailey from Mission to Seafarers, referring to the set of workplace protections for seafarers, recognized by more than 90 countries.

In 2017, partly motivated by bad press and union pressure, the shipping industry came together in an unprecedented fashion and tried to confront their tendency to abandon seafarers. The industry imposed a new rule requiring shipowners to carry insurance to cover the costs of sailors marooned in port. Unfortunately, most of the smaller and older vessels that are most likely to strand mariners are not, under this new rule, the ones required to carry such insurance.