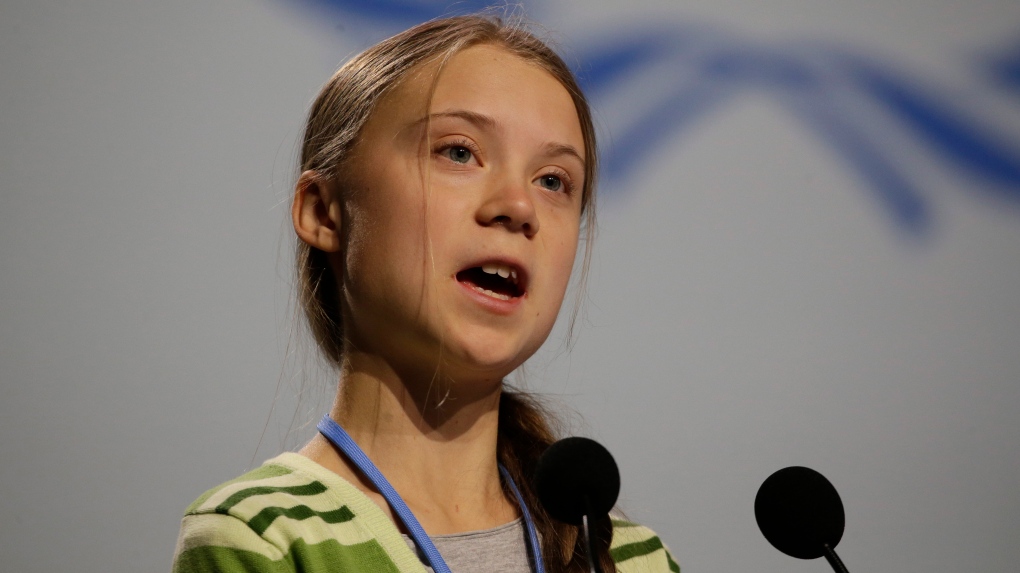 MADRID -- Activist Greta Thunberg on Wednesday accused governments and businesses of misleading the public by holding climate talks that are not achieving real action against what she called the world's "climate emergency."

In a speech peppered with scientific facts about global warming, the Swedish 16-year-old told negotiators at the UN's climate talks in Madrid that they have to stop looking for loopholes for their countries' actions and face up to the ambition that is needed to protect the world from a global warming disaster.

"The real danger is when politicians and CEOs are making it look like real action is happening, when in fact almost nothing is being done, apart from clever accounting and creative PR," said Thunberg, who later Wednesday was named Time magazine's "person of the year."

"Finding holistic solutions is what (this meeting) should be all about, but instead it seems to have turned into some kind of opportunity for countries to negotiate loopholes and to avoid raising their ambition," she added, to wide applause.

About 40 climate activists, including indigenous people from several continents, briefly joined Thunberg after her speech on the conference's main stage, holding hands and demanding "Climate Justice!" through slogans and songs.

Time magazine said Thunberg won its 2019 award "for sounding the alarm about humanity's predatory relationship with the only home we have, for bringing to a fragmented world a voice that transcends backgrounds and borders, for showing us all what it might look like when a new generation leads."

Climate negotiators in Madrid also had one eye on Brussels, where the European Union announced a 100-billion euro ($130-billion) plan to help wean EU nations off fossil fuels.

German Environment Minister Svenja Schulze said she hoped the "European Green Deal" would "give the discussions here a boost."

"It's a really important signal if the EU puts protecting the climate centre stage in this way," she told reporters in Madrid.

The European Commission hopes the fund will help the regions that stand to be hit the hardest financially by the transition to cleaner industries -- namely Hungary, the Czech Republic and Poland, which rely heavily on coal-fired power plants. Those nations have yet to commit to the EU's goal of having net zero CO2 emissions by 2050.

The climate talks in Madrid entered choppier waters Wednesday with ministers struggling to agree on rules for a global carbon market and possible ways to compensate vulnerable countries for disasters caused by global warming.

World leaders agreed in Paris four years ago to keep global warming below 2 degrees Celsius (3.6 degrees Fahrenheit), ideally no more than 1.5 C (2.7 F) by the end of the century. Scientists say countries will miss both of those goals by a wide margin unless drastic steps are taken to begin cutting greenhouse gas emissions next year.

Saying that the message doesn't seem to be getting through to governments, more than 100 activists led by representatives of indigenous peoples from Latin and North America made their way to the talks' venue, briefly blocking the entrance to a plenary meeting where UN Secretary General Antonio Guterres was to speak.

UN security personnel talked to the activists, who agreed to take their unauthorized protest outdoors.

Some experts echoed the activists' concerns about a lack of progress.

"In my almost 30 years in this process, never have I seen the almost total disconnect that we're seeing here in Madrid, between what the science requires and the people of the world are demanding on the one hand and what the climate negotiations are delivering in terms of meaningful action," said Alden Meyer of the Union of Concerned Scientist, a U.S.-based non-profit group.

Speaking at the summit, the UN's Guterres said that the 1.5 C limit was "still within reach" if countries, starting with the main emitters, step up emission cuts over the next 12 months.

Earlier, he suggested that negotiators in Madrid stop listening to those who oppose more ambitious measures for reducing emissions.

"I call on anyone who is still lobbying their governments for a slow transition -- or even in some cases no transition -- to end those activities now," he said.

The UN chief said governments were slowing down businesses action on the climate front by keeping "bureaucratic and regulatory obstacles, including perverse fossil fuel subsidies."

Addressing the heads of delegations, activists and non-governmental organizations at the climate talks, Rockstrom said the planet is heading to warming by 3-4 C in only 80 years. He said that could create an environment unseen in Earth for more than 4 million years and could trigger disastrous domino effects for human life.

"We stand on an unprecedented mountain of truth," he said. "If nature fails, we fail as well."

Following him, Thunberg cited the same reports, insisting that national pledges to reduce emissions weren't enough. She said carbon needs to remain underground and that the greenhouse gases responsible for rising temperatures need to be zeroed.

"This is not leading, this is misleading," she told the plenary, adding that "every fraction of a degree matters."

Greta asks media to focus on other young climate activists

'Climate strike' named Collins' word of the year for 2019

Greta declines cash prize, says 'the climate does not need any more awards'