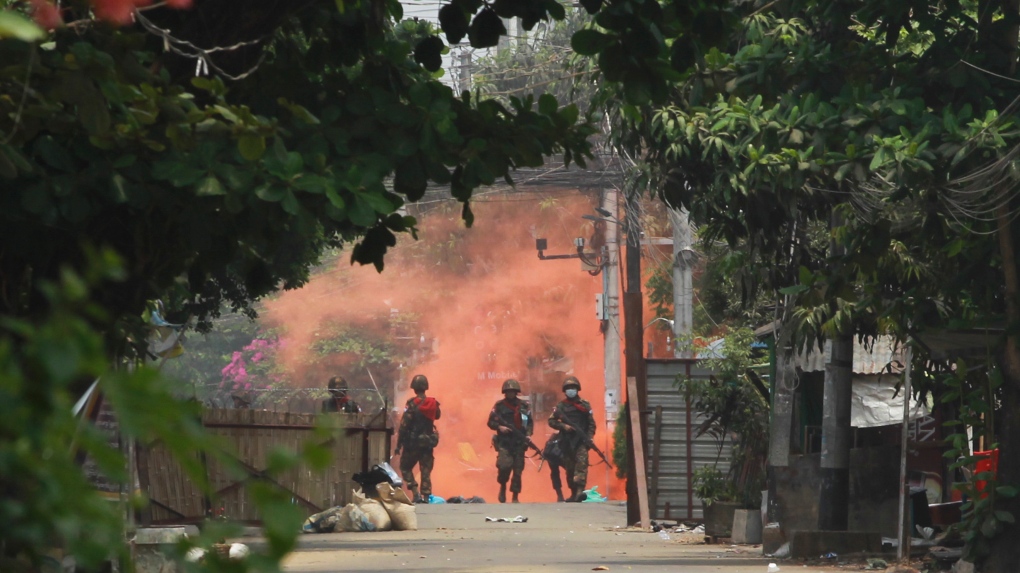 Soldiers walk towards anti-coup protesters during a demonstration in Yangon, Myanmar on March 30, 2021. (AP Photo)

Sunday's march was one of at least three held in Yangon, and similar rallies were reported in other parts of the country a day ahead of an expected verdict in the first of about a dozen criminal cases against Myanmar civilian leader Aung San Suu Kyi, who was toppled in a military takeover Feb. 1.

A video posted on social media showed a speeding small army truck heading into the marchers from behind. Voices can be heard, saying: "The car is coming ... Please help! It hit the children ... Oh! ... Dead! ... Run, ... run!" The video shows about a dozen people running from the spot.

A witness told The Associated Press that the protesters had been on his street for just two minutes when the military truck hit them, leaving three people lying motionless on the road.

"About five armed soldiers got out of the vehicle and chased after the protesters," said the witness, who insisted on anonymity for fear of arrest. "They opened fire and also arrested young people who had been hit by the car. At least 10 people were arrested."

A worker for a local emergency rescue team, who also insisted on anonymity, said it brought two men and a woman, all in their early 20s and seriously injured, to a military hospital for treatment.

State television reported that 11 protesters had been arrested, including three injured people.

Security forces have previously used cars to attack protesters since the army took power. They have also freely used live ammunition, killing about 1,300 civilians, according to a detailed list compiled by the Assistance Association for Political Prisoners.

The use of lethal force by the army and police has led to less large-scale street protests, which have been replaced by small, quickly organized marches that usually break up at the first sight of the authorities.

Sunday's deaths in Yangon's Kyeemyindaing neighborhood could not be immediately confirmed.

Another witness said that when several people came to gather their items, three more military vehicles arrived and arrested several of them.

"At least four people, including two young girls who were crying near the shoes, were arrested," he said. "The soldiers told us to go inside or they would shoot us."

A statement issued by the National Unity Government, an underground opposition group that has set itself up as the country's parallel administration, decried the incident, in which it said five people had been killed and more seriously injured.

"The randomized nature of the attacks - killing and maiming indiscriminately, is no accident. The intention of the junta is clear: create as much fear and panic as possible. Inflict as much pain, trauma, and suffering as they can, without a care as to who their victims are. Reinforce the message that anyone at any time can be killed, arrested, beaten, or wounded, simply for being in the wrong place," said the statement, signed by the group's spokesman and minister of international cooperation, Dr. Sasa.

The statement reiterated the group's call for international action to help oust the military government.

About 30 people took part in the march, according to a member of Yangon People's Strike, the local resistance group that organized it. Media posted online showed the protesters carrying placards with Suu Kyi's image, and calling for the immediate release of the country's detained civilian leaders.

The organizer, who spoke on condition of anonymity because of the threat of arrest, said the group held such protests to keep the residents involved in the struggle against the military-installed government.

At the same time, militant urban guerrilla groups have attacked officials and planted bombs, while open armed conflict had engulfed rural areas, leading to a warning the country may slide into civil war.

Since she was detained by the military, Suu Kyi has faced charges from breaching coronavirus regulations to corruption. They're seen as contrived in order to discredit her and justify the military takeover.

The army claims it acted because last November's election was marked by widespread electoral fraud. Independent observers of the polls, won by Suu Kyi's National League for Democracy party, say have seen no evidence justifying the army's claim.