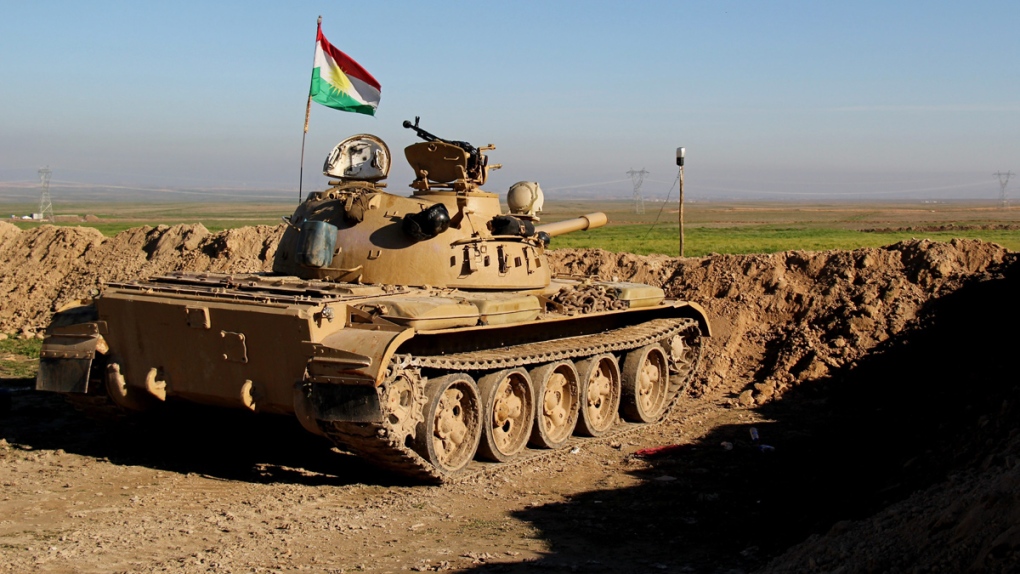 OTTAWA - Coalition forces in Iraq are reporting faster-than-expected progress against the so-called Islamic State, though that success has been marred by fears that a new civil war is brewing in the country.

The Iraqi military declared Tuesday that it had regained control of the town Hawija and the surrounding area after three weeks of fighting, eliminating ISIS' last major stronghold in Iraq.

That leaves a small pocket near the Syrian border as the last area still under the group's control.

In an interview with The Canadian Press, a senior coalition officer said the battle for Hawija, which included assistance from Canadian special forces, was much easier than commanders expected.

"We thought they were going to fight to retain that a lot more aggressively," said Brig.-Gen. Craig Aitchison, who is Canadian but helping oversee all coalition ground forces. "As we saw, they didn't."

Some extremists escaped into the desert, but many surrendered en masse after a token resistance - which Aitchison said has been the trend since the pivotal battle for Mosul ended in June.

"The general assessment is the back of the physical caliphate has been broken, the leadership has abandoned the local fighters," he said. "They've been demoralized."

Yet the good news is being overshadowed by the war of words between Baghdad and the regional government in Iraq's Kurdistan region over the latter's independence referendum last month.

Baghdad opposed the referendum, and has since banned international flights into the Kurdish region and threatened to fight the Kurds for control of the oil-rich city of Kirkuk and other disputed land.

The Kurds briefly closed the main road from northern Iraq to Baghdad on Tuesday following reports of a potential attack by Iraqi and Shiite militia forces and the possibility of a civil war looms large.

Aitchison played down the situation as "mostly rhetoric," but acknowledged the coalition is monitoring the situation to ensure there is no impact on the fight against ISIS.

The general was reluctant to dwell on what the coalition would do if fighting between Iraqis and Kurds did break out, except to say: "I think it would be safe to say that we wouldn't take sides.

"We have contingency plans in place for a whole bunch of eventualities," he added. "But I hope it doesn't come to that. I hope that they can resolve their political disagreements amicably."

Iraqi Prime Minister Haider al-Abadi on Tuesday raised the possibility of asking coalition forces to leave the Kurdistan region - or Iraq altogether, which Aitchison said was within Baghdad's rights.

"We're here at the invitation of the government of Iraq," he said, "and so if they decide that they're going to ask us to operate or not operate in certain areas, that's their purview."

The Canadian government has refused to weigh in on the referendum, even as others, such as the U.S., Iran, Turkey and even the UN, have come out against it.

But officials warned Prime Minister Justin Trudeau in a briefing note in November 2015 that the war with ISIS had let the Kurds "expand into disputed territory in northern Iraq, including the oil-rich city of Kirkuk."

"Should the (ISIS) threat recede, Baghdad will have to contend with a range of land disputes with the (Kurds), as well as strengthened Iraqi Kurdish forces, which have received training and equipment from coalition members, including Canada."

The Liberal government responded by increasing Canada's support to the Kurds, tripling the number of Canadian military trainers and promising to provide them with weapons.