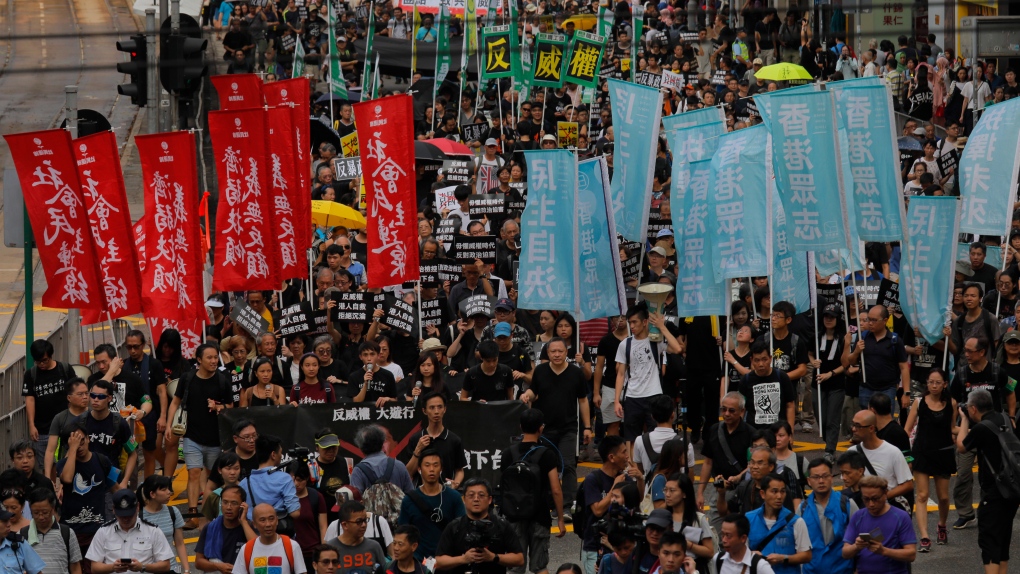 HONG KONG -- Thousands of pro-democracy supporters took to the streets of Chinese-controlled Hong Kong on Sunday to protest against what they say is the Beijing-backed government's use of the courts to pursue its opponents.

Demonstrators marched through the semiautonomous Chinese region's streets on the same day as a national holiday marking the founding of the People's Republic of China.

They carried banners calling for the rejection of "authoritarian rule" and demanded the city's Justice Secretary Rimsky Yuen step down. The protesters said his request for the courts to review sentences for three pro-democracy activists, which resulted in them being sent to prison, eroded the city's rule of law.

Many protesters heeded organizers' calls for them to wear black T-shirts in a show of support for the three activists, including young protest leader Joshua Wong. The three originally received community service or suspended sentences for their role in an illegal rally that sparked massive 2014 protests, but under the new stiffer sentences handed out this summer, they got six to eight months in jail.

"We think political prosecution is becoming increasingly significant in Hong Kong," said Au Nok-hin, vice-convener of one of the organizing groups, the Civil Human Rights Front.

In a statement, the government said the justice department has been handling all cases in accordance with the law.

"No political consideration is being taken into account at all. The allegations of political prosecution or persecution are entirely unfounded," the statement said.

Many Hong Kong residents fear that Beijing is undermining the "one country, two systems" blueprint in place after China took control of Hong Kong from Britain in 1997, which lets the city retain wide autonomy and a separate legal system, including an independent judiciary.