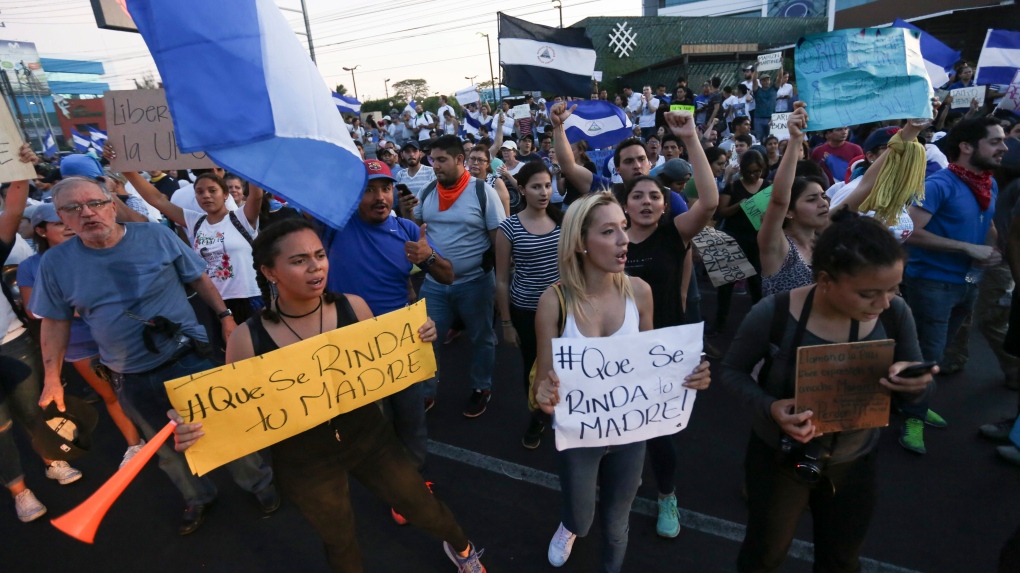 Demonstrators hold signs that reads in Spanish "Let your Mother give up!" during a protest against the government of President Daniel Ortega, in Managua, Nicaragua, Sunday, April 11, 2018. (AP Photo/Alfredo Zuniga)

MANAGUA, Nicaragua -- Tens of thousands of Nicaraguans marched Monday in the capital to protest government repression and call for peace after several days of violent demonstrations set off by a social security overhaul.

The U.S. government on Monday urged people to "reconsider travel to Nicaragua due to crime and protests" and it ordered the families of diplomats to leave the Central American country.

Esther Chavarria, a 26-year-old architect who joined Monday's march, said: "Nicaraguans are saying enough violence against the people, no more repression and violation of the constitution."

The rescinded changes would have imposed higher contributions by workers and employers and required retirees with pensions to give up 5 per cent of their checks for medical care.

Monday's protest was the largest against the government of President Daniel Ortega, the former Sandinista guerrilla fighter who began his third five-year term in office last year. His wife, Rosario Murillo, is Nicaragua's vice-president.

The march was called by the country's private business sector, a segment of society that did not support Ortega when he entered power in 2007.

"We recognize and value that the civil and peaceful struggle led by our youth has been key in the government's repeal of the executive decree that set off this social crisis," said Jose Adan Aguerri, president of the Superior Council of Private Business.

The street protests have largely been led by university students and have appeared to expand to include broader anti-government grievances. They have at times met violent police repression and attacks from Sandinista youth and motorcycle-riding thugs.

The march Monday headed to the Nicaragua Polytechnic University where students have taken control of the campus. The Nicaraguan Medical Association confirmed two deaths occurred Sunday night during a clash at the university.

Ortega received support Monday from Venezuela's socialist president, Nicolas Maduro, who said the protest outbreak was "a violent ambush by groups that sadly have already done a lot of damage."