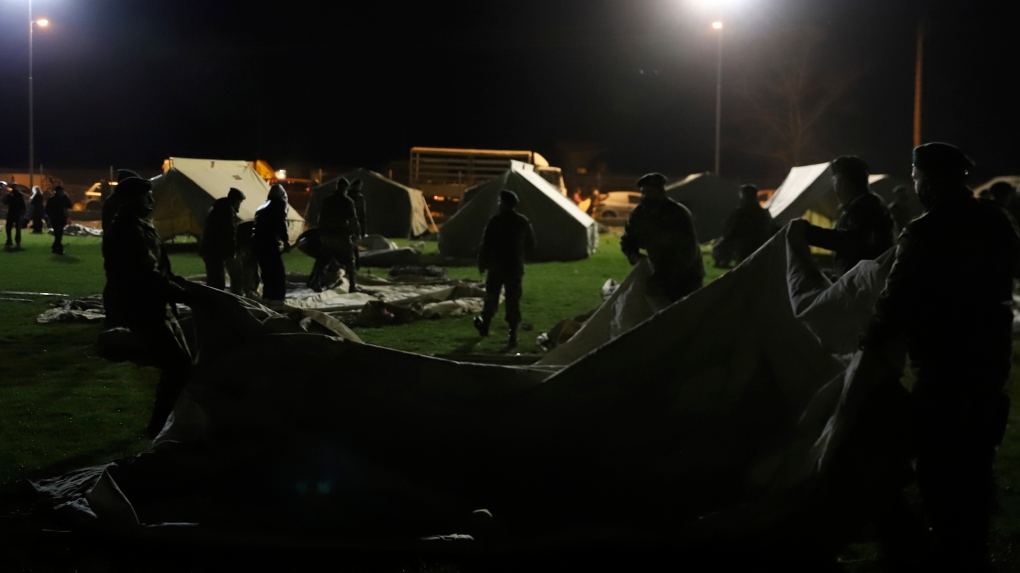 ATHENS, GREECE -- Fearful of returning to their homes, thousands of people in central Greece were spending the night outdoors late Wednesday after a powerful earthquake, felt across the region, damaged homes and public buildings.

The shallow, magnitude-6.0 quake struck near the central city of Larissa. One man was hurt by falling debris but no serious injuries were reported.

Officials reported structural damage, mainly to old houses and buildings that saw walls collapse or crack. One of them was a primary school, stone-built in 1938, in the quake-hit village of Damasi where 63 students were attending classes.

“The teachers kept their cool and the pupils stuck to the emergency drill, and everyone got out okay,” headmaster Grigoris Letsios said while on a video call with Greek Prime Minister Kyriakos Mitsotakis. “The building will be condemned now...We'll need a new school.”

The army set up tents and meal counters at a nearby soccer field as local officials urged people to remain outside their homes until they could be inspected. A series of powerful aftershocks of up to 5.2 magnitude kept many residents on edge.

“Have you seen how trees move when the wind blows? That's how the houses moved,” Damasi resident Vangelis Mouseris said.

“I stood still like a statue. I wondered whose house would fall? The neighbour's house? My house? I've never felt something like this before.”

The quake struck at 12:16 p.m. (1015 GMT), according to the Athens Geodynamic Institute, and was also felt in neighbouring Albania and North Macedonia, and as far north as Kosovo and Montenegro.

Turkish Foreign Minister Mevlut Cavusoglu phoned his Greek counterpart, Nikos Dendias, to convey solidarity and offer assistance if needed, according to officials from the two neighbouring countries - which are longtime regional rivals.

In Athens, seismologist Vassilis Karastathis told reporters that the quake originated in a fault line in the area that has historically not produced temblors of much larger magnitude than Wednesday's. He said the post-quake activity appeared normal so far but experts were monitoring the situation.

“The earthquake had an estimated depth of just 8 kilometres (5 miles) and that was one of the reasons why it was felt so strongly in the region,” said Karastathis, who is the deputy director of the Athens Geodynamic Institute.

The head of Greece's armed forces was in the quake-hit area to assist emergency service, and Fire Service helicopters were used before nightfall to assess building damage around the central Greek towns of Tyrnavos, Elasona, and elsewhere near the epicenter.

The fire department said it had received multiple calls Wednesday to deal with medical emergencies, helping patients with various chronic conditions get hospital access, already affected by the pandemic.

Greece lies in a highly seismically active region. The vast majority of earthquakes cause no damage or injuries, many occurring under the sea.

Last October, an earthquake that struck the eastern Greek Aegean island of Samos and the nearby Turkish coast killed two high school students on Samos and at least 75 people in Turkey. In 1999, an earthquake near Athens killed 143 people.