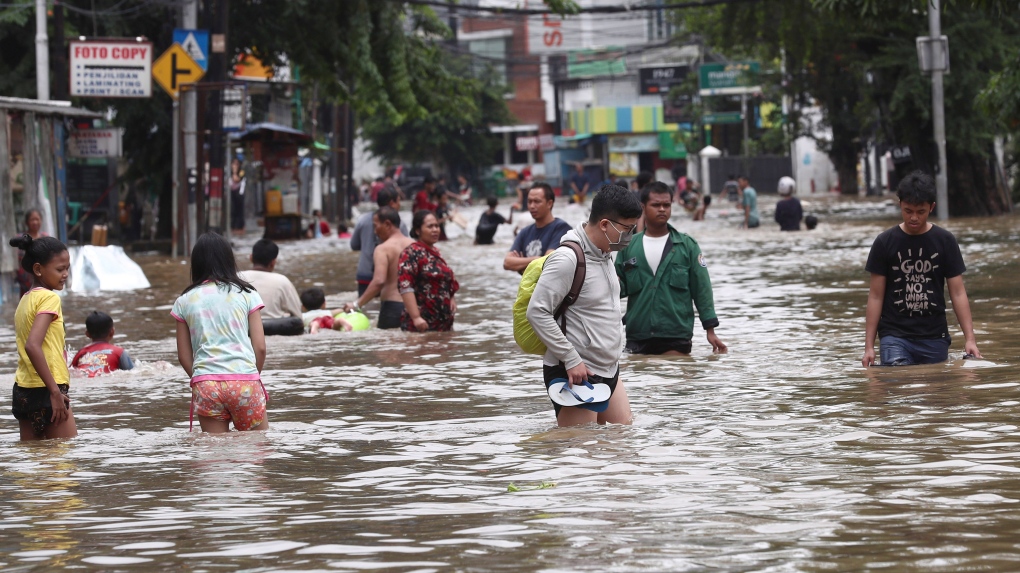 JAKARTA, INDONESIA -- Floods that have crippled much of Indonesia's capital worsened Tuesday, inundating thousands of homes and buildings, including the presidential palace, and paralyzing transport networks, officials and witnesses said.

Floodwaters entered parts of Indonesia's presidential palace complex Tuesday morning but the situation was brought under control with water pumps, said Bey Machmudin, an official at the Presidential Office.

Wibowo said the floods on Tuesday inundated scores of districts and left more than 300 people homeless, forced authorities to cut off electricity and paralyzed transportation, including commuter lines, as floodwaters reached as high as 1.5 metres (5 feet) in places.

Television footage showed soldiers and rescuers in rubber boats struggling to evacuate children and the elderly who were holding out on the roofs of their squalid houses.

Indonesia's meteorological agency is predicting rain for the next two weeks.

Jakarta is home to 10 million people, with a total of 30 million in its greater metropolitan area. It is prone to earthquakes and flooding and is rapidly sinking due to uncontrolled extraction of groundwater. Congestion is also estimated to cost the economy $6.5 billion a year.

President Joko Widodo announced in August that the capital will move to a site in sparsely populated East Kalimantan province on Borneo island, known for rainforests and orangutans.

Seasonal downpours cause dozens of landslides and flash floods each year in Indonesia, a sprawling archipelago of 17,000 islands where millions of people live in mountainous areas or near fertile plains.