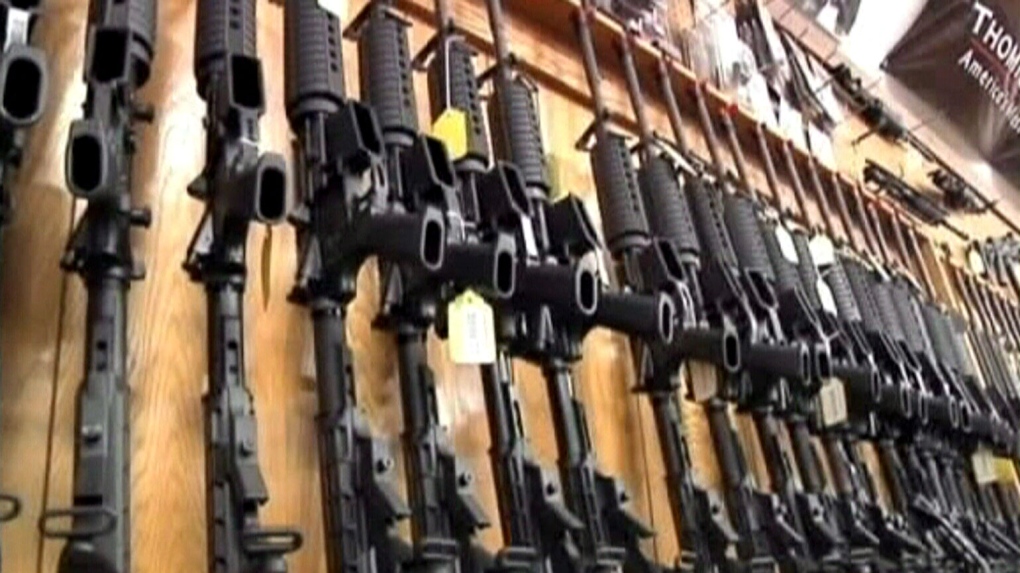 In this undated file photo, a variety of guns are seen mounted in a display.

The San Jose, California, city council voted Tuesday night to adopt a first-in-the-U.S. ordinance requiring most gun owners to pay a fee and carry liability insurance, measures aimed at reducing the risk of gun harm by incentivizing safer behaviour and easing taxpayers of the financial burden of gun violence.

The ordinance must be approved next month at its final reading in order to take effect in August. Gun rights supporters have threatened to sue to block the measures if they become law.

Ahead of the vote, Democratic Mayor Sam Liccardo estimated that San Jose residents incur about US$442 million in gun-related costs each year. "Certainly the Second Amendment protects every citizen's right to own a gun. It does not require taxpayers to subsidize that right," Liccardo said Monday at a news conference.

Mass shootings impelled Liccardo to push the fee and insurance initiatives -- first after the 2019 slayings at a festival in nearby Gilroy, California, then following last year's deadly siege at public transit facility in his city. The mayor has compared the plan to car insurance mandates, which he credits with dramatically reducing traffic fatalities.

Just 52% of Americans polled in late 2021 said "laws covering the sales of firearms" should be stricter, the lowest number Gallup has measured on the question since 2014. Meanwhile, there is a direct correlation in states with weaker gun laws and higher rates of gun deaths, including homicides, suicides and accidental killings, a study released Thursday by Everytown for Gun Safety found.

Tuesday's vote followed hours of debate and public comment on the issue. Critics argued the ordinance punishes law-abiding gun owners and doesn't do enough to address root causes of gun violence. One speaker told the council during the public comment session, "You cannot tax a Constitutional right" and urged lawmakers to instead focus on enforcing existing laws, hiring more police officers and funding mental health services.

A supporter told the council the ordinance will "help protect our community from preventable gun deaths," while another urged members to approve the measure, saying, "In the near future, it will be very evident that this was an obvious thing to do, and we'll wonder why we didn't do it sooner."

A GUNS RIGHTS GROUP HAS THREATENED TO SUE

Under San Jose's measure, gun owners would be charged an annual US$25 fee directed to a nonprofit set up to distribute funds to gun crime prevention and to victims of gun violence. The measure also would require gun owners to obtain liability insurance that would cover damage caused by their weapon.

People who fail to comply are subject to fines and could have firearms impounded "subject to a due process hearing," the ordinance says.

Lower premiums for those with gun safes, trigger locks and completed gun safety classes are expected to incentivize safer behavior.

As to enforcement, police officers crossing paths with gun owners would ask for proof of insurance, much like they do with car insurance during traffic stops, Liccardo explained.

While some would be exempt, including those in law enforcement, those with concealed-carry permits, and those for whom the fee would be a financial burden, pushback is expected, the mayor acknowledged.

"If the San Jose City Council actually votes to impose this ridiculous tax on the Constitutional right to gun ownership, our message is clear and simple: see you in court," Brown said.

The National Foundation for Gun Rights in July sent a cease-and-desist letter to Liccardo and the council's 10 members stating it intends to file suit as soon as the ordinance is passed. The group was reacting to a June 29 council action in which "you voted unanimously to have the City Attorney research and draft an ordinance that would impose a mandatory fee on gun owners and require them to buy gun liability insurance," the letter states.

San Jose has identified a law firm that would represent the city on the issue at no charge, the mayor's spokesperson said.

The five jurors at the inquest into the death of Chantel Moore have ruled that the Indigenous woman's death was a homicide.

A 911 dispatcher has been placed on leave and may lose her job after allegedly hanging up on an supermarket employee hiding during this weekend's shooting rampage in Buffalo, New York.

Jason Kenney has quit as UCP leader. What happens to the party and government now?

With Jason Kenney having stepped down as leader of Alberta's United Conservative Party, who is now leader of the province?