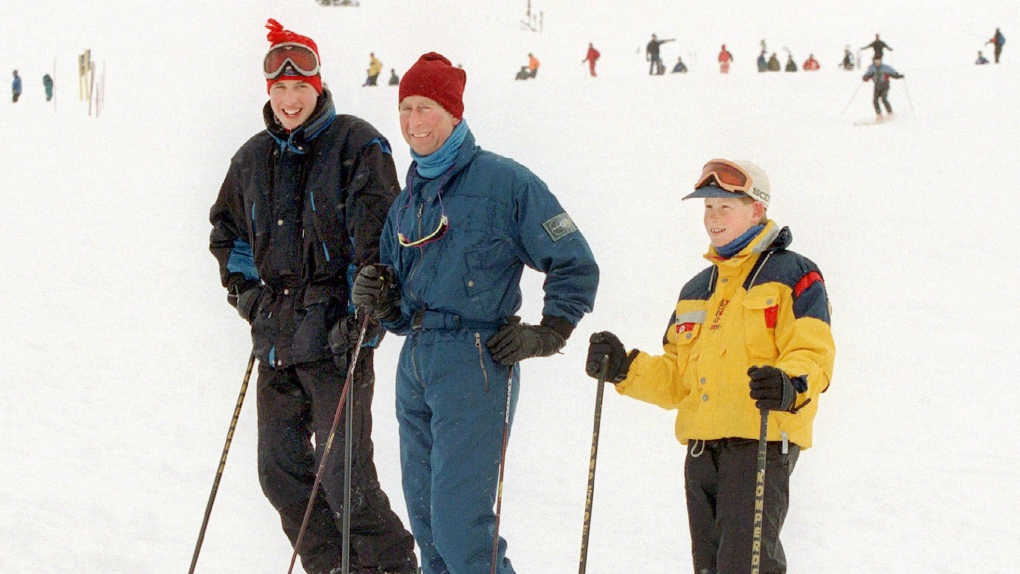 Prince William (Left), Prince Charles (centre) and Prince Harry (Right) are all smiles as they pause for a photo-op on the slopes of Whistler Mountain, B.C. Thursday. (CP / Frank Gunn)

VANCOUVER -- The screams were deafening.

It was March 24, 1998, and hundreds of teenage girls were crammed behind barriers outside a suburban Vancouver high school. The girls weren't squealing for the Backstreet Boys or Leonardo DiCaprio -- they were there to see a real-life prince.

"Like back in the day when the Beatles came through, people were just going crazy and swooning and couldn't believe their own eyes that the princes were there."

The frenzied female reaction to William, then 15, during his 1998 vacation with his father and brother, Prince Harry, cemented his status as a teen heartthrob. Canadians' warm welcome also undoubtedly comforted him on his first official trip abroad after his mother's death, royal watchers say.

So when William returns to British Columbia on Saturday for a week-long visit with his wife and two young children, observers say it will be a homecoming of sorts after his star power was proven in the province two decades ago.

"Prince William was the original One Direction," said Keith Roy, Western Canadian spokesman for the Monarchist League of Canada, referring to the British-based boy band.

"He was always a nice kid. Then to watch him go through the tragedy of his mother dying and still hold himself together and be stately, be strong and be vulnerable -- that's quite the threat when girls are looking for characteristics in a guy."

The "Wills mania," as it was dubbed by the British press, appeared to surprise and embarrass the young prince. A particularly devoted pack of girls vowed to follow him to every tour stop, carrying signs that proclaimed, "William. It's me you've been looking for."

One 14-year-old jumped a barricade outside his hotel to try to deliver a teddy bear and bouquet, but she was caught by a police officer.

"Prince William should know his future wife," she protested through tears, according to a Canadian Press report at the time.

The princes and their father only spent about 24 hours in Vancouver before taking a helicopter to Whistler for four days of skiing. Their time on the mountain was mostly private, as the boys were still grieving their mother's death the previous August.

But their brief stay in Vancouver was memorable. A photograph of the brothers wearing red maple-leaf Olympics jackets from Roots became a symbol of the family's embrace of the Great White North.

Then there was the visit to the high school, which administrators believe was chosen because it contains a school for the deaf. Princess Diana was passionate about deaf education, and it appeared Prince Charles wanted his sons to share that interest, said former vice-principal Steve Bailey.

The royal family was introduced at an assembly inside the school's Michael J. Fox Theatre, where the former principal called Prince Harry by his real name, Henry. Bailey said Charles stood up and quipped, "We only call him Henry when he's very, very naughty."

Bailey recalled that Harry, then 13, was more outgoing than his shy, older brother and assured William at one point, "Don't worry about this. It'll all be fine. All you have to do is smile and wave at the people."

The brothers also visited the city's astronomy museum, now called the H.R. MacMillan Space Centre, where they revealed a competitive side to their relationship while playing with a computer simulator to land a space shuttle.

"They were kidding each other, if one was doing better than the other one," said Gayle Seaman, an administrative assistant. "But staff noticed William was protective. He could kid Harry, but he wasn't going to let anybody else say anything about him."

A friendly competition also emerged on the ski hills, recalled Barrett Fisher, president and CEO of Tourism Whistler. All three princes were expert skiers, tackling all terrain, but there was an ongoing joke about who was best, she said.

"I think a journalist had asked, 'Was Harry the best skier?' And William said, 'Oh, I don't know about that.' "

Royal historian Carolyn Harris said the 1998 visit didn't only attract fawning teenage girls. It also drew many Canadians who had admired Diana and wanted to make sure her sons were all right following her death, she said.

"William was very warmly received ... though the attention may also have been fairly overwhelming at that difficult time," she said.

There was speculation that the princes were being eased into a greater degree of public life, as Canada is thought to be a safe and welcoming destination for royal visits, Harris added.

Roy said the upcoming trip comes at a much happier time in William's life.

"We're going to see enormous crowds of people out to support William and Catherine on this tour. It's going to be the same level of frenzy and excitement that we saw in '98."

From blankets to bears: Gifts received by the Royal Family on their tours of B.C. and Yukon

Everything you need to know about the royal visit

Royal etiquette 101: What to do when meeting the Duke and Duchess

Latest news on the Royal tour