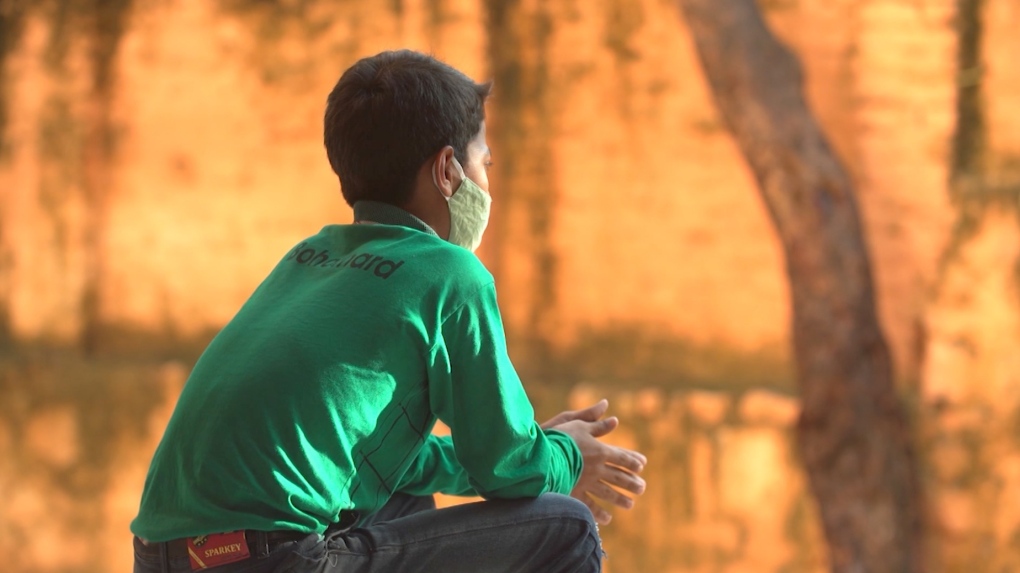 The pandemic has created a second crisis in India — the rise of child trafficking. (CNN)

One evening in August, a 14-year-old boy snuck out of his home and boarded a private bus to travel from his village in Bihar to Jaipur, a chaotic, crowded and historical city 1,287 kilometres away in India's Rajasthan state.

He and his friends had been given 500 rupees (about US$7) by a man in their village to "go on vacation" in Jaipur, said the boy, who CNN is calling Mujeeb because Indian law forbids naming suspected victims of child trafficking.

As the bus entered Jaipur, it was intercepted by police.

The man was arrested and charged under India's child trafficking laws, along with two other suspects. Nineteen children, including Mujeeb, were rescued. Jaipur police said they were likely being taken to bangle factories to be sold as cheap labour.

In India, children are allowed to work from the age of 14, but only in family-related businesses and never in hazardous conditions. But the country's economy has been hit hard by the coronavirus pandemic and many have lost their jobs, leading some families to allow their children to work to bring in anything they can.

Making colored lac bangles like those sold in Jaipur is hot and dangerous work, requiring the manipulation of lacquer melted over burning coal. Bangle manufacturing is on the list of industries that aren't allowed to employ children under 18.

In recent years, India has strengthened its laws on child labour, but in the past six months -- with COVID-19 taking a toll on the economy -- that work has started to unravel.

"Children have never faced such crisis," said 2014 Nobel Peace Prize winner Kailash Satyarthi, whose organization Bachpan Bachao Andolan (Save the Childhood Movement) works to protect vulnerable children. "This is not simply the health crisis or economic crisis. This is the crisis of justice, of humanity, of childhood, of the future of an entire generation."

When India went into a strict lockdown in March, schools and workplaces closed. Millions of children were deprived of the midday meal they used to receive at school and many people lost their jobs.

Between April and September, 1,127 children suspected of being trafficked were rescued across India and 86 alleged traffickers were arrested, according to Bachpan Bachao Andolan.

Most of the children came from rural areas of poorer states, such as Jharkhand or Bihar. Pramila Kumari, the chairwoman of Bihar's Commission For Protection Of Child Rights, said the government commission had received more complaints of trafficking during the pandemic.

Child trafficking, when young people are tricked, forced or persuaded to leave their homes and then exploited, forced to work or sold, can occur in several ways. Experts say sometimes, children are lured with false promises without their parents ever knowing, like Mujeeb. Other times, desperate parents hand their children over to work so they can send money home.

Rescued children describe being forced to work without pay in grueling conditions. Some say they have also experienced physical abuse. Without resources and under the control of traffickers, many have no way to leave or communicate with their families.

Nearly always, the trafficker is known to the local community, if not a member of the community themselves, according to children's rights activists and police.

And the children most at risk are those in families facing acute poverty -- a symptom of the country's massive wealth inequality, which has been exacerbated by the pandemic.

POVERTY, UNEMPLOYMENT AND HUNGER DURING LOCKDOWN

After India went into total lockdown in March, more than half of all migrant households in Bihar state lost all their income, according to a study conducted in July by UNICEF and Population Council Institute.

The region is home to millions of migrant workers, including Mujeeb's father, a construction worker in Delhi.

The state government provided food rations -- but only 42% of migrant households found the aid sufficient, according to the study.

By the time the federal government began lifting lockdown measures in late May, poorer families were struggling. So many migrant workers went home during the lockdown that demand for cheap labour in India's cities soared as the country reopened.

Indian police said this desperation, demand for workers, and the reopening of state borders created the perfect environment for traffickers to exploit children.

"Now post the lockdown, factories are re-opening and the migrant labour is returning (and) what we are seeing is that children are coming with them," said Shiv Narayan, the station police officer in Jaipur's Bhatta Basti neighborhood, which is home to many small-scale industries and bangle factories.

A survey by Satyarthi's Children's Foundation of 245 households in rural areas of five poorer states, including Bihar, found that 21% of respondents were potentially ready to send their children under 18 to urban areas for work due to their increased economic vulnerability.

But it's not just parents who feel they have no other choice -- the children themselves may feel compelled to go to earn money for their hungry families. Mujeeb said he had brought up the possibility of leaving before with his grandmother, but she had always discouraged him, despite the family's troubles.

"There are no earnings here," said his grandmother, who didn't want to be named. "How do I feed the child? I told him not to go, but he left with nothing to eat at home."

Fifteen-year-old Aman (not his real name) from Madhubani district in Bihar, also left home during the pandemic to earn money for his family. His father, a daily wage laborer, lost his job during the lockdown leaving the family with very little to eat, said Aman, whose identity cannot be revealed under Indian laws to protect trafficked minors.

"When there is tension in the village, shortage of food, then one is forced to think of going elsewhere to work," said Aman. "I thought if I go and get a job, I can send some money home for my family to eat."

Schools were still shut and, as the eldest child in his family, he felt a responsibility to help. So, after borders reopened, he decided to go to Jaipur with a man who promised paid work there. Like Mujeeb, Aman got on the bus without telling his family, knowing they might try to stop him. His bus was right behind Mujeeb's, according to police.

When the police intercepted the buses and arrested the traffickers, they brought Aman, Mujeeb, and 17 other children to a shelter.

Soon after arriving, Mujeeb said he was eager to go home. Aman said there was nothing awaiting him but the same poverty that drove him to leave.

"We don't even have enough to eat," he said. "So, my only option is to drop out of school and work to help my family."

If Mujeeb and Aman hadn't been rescued by police on their way to Jaipur, they might have ended up like Nishad, a 12-year-old boy who was allegedly forced to work in a bangle factory under brutal conditions.

Nishad, whose real identity can't be revealed under Indian law, was brought to Jaipur from Bihar by an alleged trafficker just before the March lockdown. Nishad claimed the man locked him and five other boys in a dingy room without any windows and forced them to make bangles for 15 hours a day. There was no way to call authorities or even contact their families, he said.

"He made us work for so long and if we didn't work, he would hit us. We were not allowed to step outside. He said that if we got out the police would arrest us," said Nishad.

Nishad and the other children worked in one factory for five months before police raided it in August after receiving a tip-off from child rights activists at Bhatta Basti.

The man Nishad says mistreated him has been charged under India's Child Labour Act and Juvenile Justice Act and is now in police custody. Before his arrest, the alleged trafficker told CNN that he pays parents a few thousand rupees to bring their children to Jaipur for work and a better life.

"I go and get poor children from Bihar and pay their parents 3,000 rupees (about $40)," he said. "I bring the children in a bus to work here in factories."

Jaipur is a major destination for traffickers to sell children for labour because it's home to bangle factories that perform difficult, intricate work.

In north Jaipur alone, there have been up to 20 police raids and 12 registered cases of child trafficking and child labour since early June, when the lockdown was eased, according to police.

In Jaipur, 50 children were rescued in the last two weeks of August, said Police Inspector Rajendra Khandelwal, whose anti-human trafficking unit conducted the raids on Nishad's factory. The 50 children included Mujeeb, Aman and the other children on the buses from Bihar.

Satyarthi says his organization has been tracing the movement of traffickers from source areas like Bihar, as well as rescuing trafficked children from railway stations or transport hubs. He and other rights activists say the government isn't taking sufficient action on a national level.

A revised version was due to be considered by ministers earlier this year, but it hasn't progressed to parliament due to the coronavirus outbreak.

Activists warn that if more urgent action isn't taken to address the problems known to cause child trafficking, the current crisis could reverse decades of progress.

To help avoid that, the government needs to do more to get children back in school after the lockdown, activists say.

Kumari, of Bihar government's child rights commission, said they have formed an anti-child trafficking task force in response to the spike in cases. They also issued advisories to local officials and hold virtual meetings on the issue, she said.

"About the rise in child trafficking, we have sent letters to all district magistrates and NGOs, that if a case like this comes up, there should be immediate action taken," she said.

Niranjanaradhya V. P., a development educationist at the National Law School, believes that 30% of children who left school due to the pandemic lockdown will never return. He says the government's National Education Policy, which aims to formalize early childhood schooling and expand tertiary education, has no measures in place to address this dropout.

Satyarathi says children who leave school early are the most vulnerable to exploitation.

"Those who drop out and are not able to come back to classes, they will not be sitting free at home," Satyarathi said. "They will be trafficked, they would become child laborers, they will get married at an early age, beg on streets or even become child criminals and child soldiers."

He said he has written to national and local authorities to express his concerns.

Aman, the 15-year-old boy, wants to go back to school, but without enough money for food, let alone a computer for online classes during the pandemic, an education doesn't seem possible.

The boys stayed at the shelter for about a month before officials arranged for them to go home.

When asked if he preferred to stay in the shelter or return home, Aman looked off in the distance. He took a deep breath and a long pause.