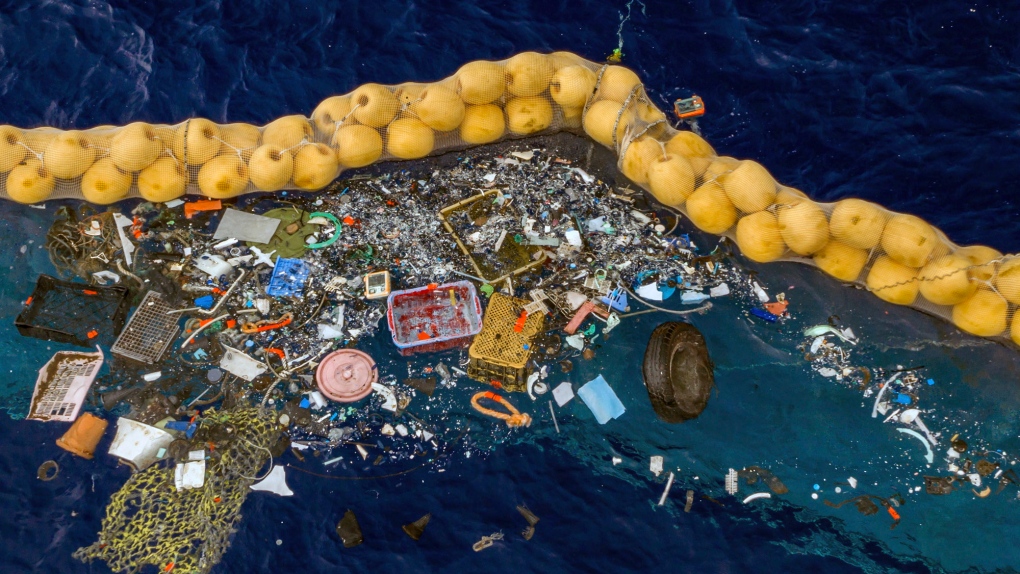 In this undated handout photo provided by The Ocean Clean Up, plastic is retained in front of an extended cork line in the Pacific Ocean. (The Ocean Cleanup via AP)

TORONTO - A huge floating u-shaped boom on the “Great Pacific Garbage Patch” is finally catching plastic and other trash.

The Ocean Cleanup project has been beset with problems since it was towed into place between California and Hawaii in September last year.

The solar-powered plastic barrier is intended to act like a coastline, trapping garbage from the patch, which is twice the size of Texas.

Slat included a picture in his tweet of the collected trash, including a car wheel.

The non-profit company explained that it struggled with “correcting the inconsistent speed difference between the system and the plastic,” which was resolved by slowing down the 600-metre-long barrier with a parachute sea anchor, “allowing for faster-moving plastic debris to float into the system.”

A skirt running the length of the floater prevents debris from escaping underneath and leads it into the retention system, the non-profit company describes.

“A cork line above the skirt prevents overtopping and keeps the skirt afloat,” the Rotterdam-based charity states on its website.

“As the system moves through the water, slower than the plastic, the plastic collects within the boundaries of the U-shaped system.”

“This first year of testing in the unforgivable environment of the high seas strongly indicates that our vision is attainable and that the beginning of our mission to rid the ocean of plastic garbage, which has accumulated for decades, is within our sights,” said Slat.

--- With files from The Associated Press

Also, anyone missing a wheel? pic.twitter.com/Oq0rkXO3TH