The 2020 Atlantic hurricane season runs out of names, turns to Greek alphabet 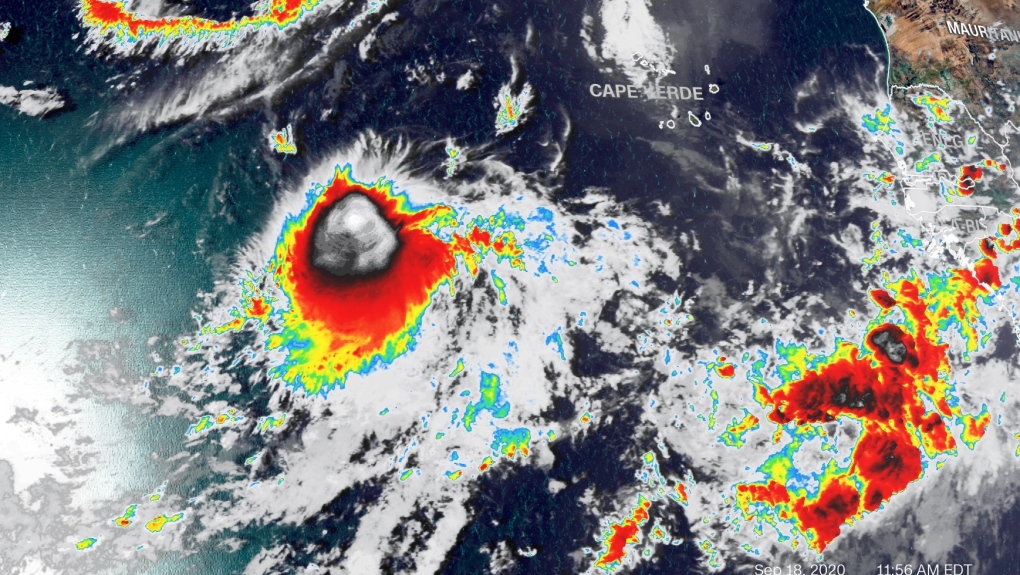 Tropical Storm Wilfred formed in the eastern Atlantic, marking off the last name on the 2020 list of Atlantic hurricane names (credit CNN).

CNN -- With the naming of Tropical Storm Wilfred in the eastern Atlantic on Friday, the National Hurricane Centre has officially used up all its names for 2020 hurricanes.

Wilfred was the last name on this year's list of 21 Atlantic hurricane names -- only the second time in recorded history that all the names were used. The NHC does not use the letters Q, U, X, Y and Z because there aren't enough names to fill those letters.

The storm is just over 600 miles west of the Cabo Verde Islands, according to the National Hurricane Centre. It poses no threat to land and is forecast to weaken over the Atlantic next week.

To name additional storms, the NHC will use the Greek alphabet, which has only happened once since NHC started naming storms in 1953. In 2005, the NHC had to use six letters of the Greek alphabet for a record number of storms since it had already run through the 21 letters available to the agency in the English alphabet.

And we didn't have to wait long. Shortly after Wilfred, Subtropical Storm Alpha also formed Friday about 75 miles from Lisbon, Portugal, with winds of 80 km/h, per the NHC. The center of the storm should make landfall in Portugal shortly before weakening.

The next named storm would be dubbed Beta. The name could go to Tropical Depression Twenty-Two in the western Gulf of Mexico (though that storm was previously expected to become Wilfred and Alpha).

As of late Friday morning, the storm was about 450 kilometres south of the Texas-Mexico border with winds of 56 km/h. There's an increasing risk of heavy rain and flooding along the Texas coast beginning Sunday, according to NHC, but it's still too early to determine what areas might see direct impacts of wind and storm surge.

"The 2020 season has been remarkable," CNN meteorologist Taylor Ward said. "Every tropical wave or disturbance seems to be developing into a named storm. This stretch of hyperactivity is extremely rare."

Meanwhile, Hurricane Teddy, a powerful Category 4 storm with winds of 210 km/h, is in the central Atlantic. It's forecast to move north and could impact Bermuda on Sunday or Monday. It's expected to continue north toward the Canadian Maritimes, though parts of coastal New England could also feel impacts if the storm shifts further west next week.