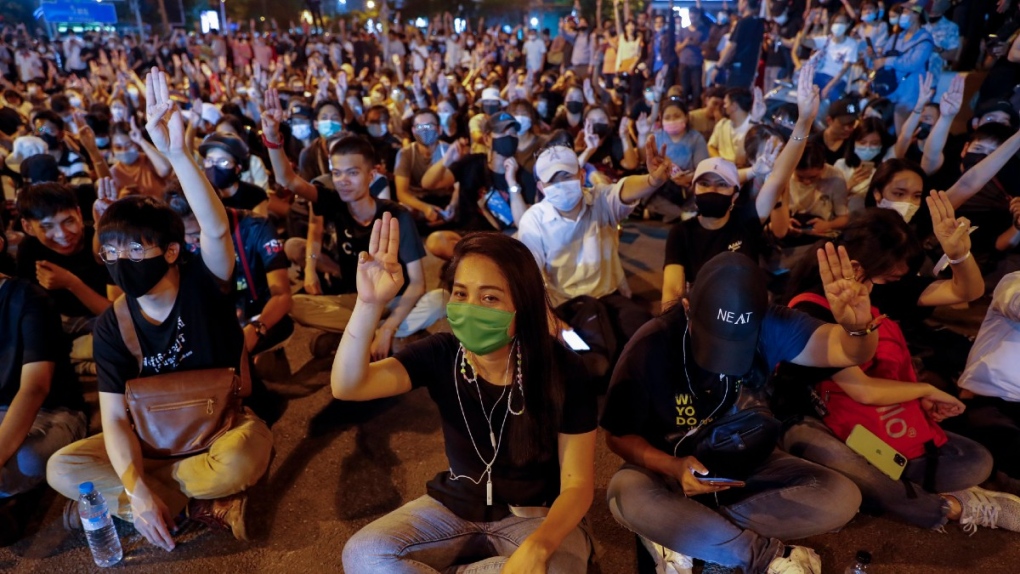 Pro-democracy protesters display three-fingered salute during a rally at a major intersection next to the German Embassy in central Bangkok, Thailand, on Oct. 26, 2020. (Gemunu Amarasinghe / AP)

BANGKOK -- Pro-democracy demonstrators in Thailand expanded their protests internationally on Monday, marching to the German Embassy to appeal to Angela Merkel's government to investigate whether Thailand's king has exercised political power during his extended stays in Bavaria.

The protesters acted while criticizing their own Parliament, which began a special two-day session earlier Monday to address political tensions resulting from the near-daily pro-democracy protests demanding the prime minister's resignation, constitutional changes and reforms to the monarchy.

They believe the king wields an inordinate amount of power in what is nominally a democracy under a constitutional monarchy.

The scrutiny and public criticism of the monarchy that has been displayed by some of the protesters is unprecedented in a country where the royal institution has been considered sacrosanct. It has also led royalists to stage their own counter rallies and to denounce the protesters for raising the issue, increasing the risk of confrontation.

The protesters, estimated by an Associated Press journalist to number between 5,000 and 10,000, defied police warnings that they constituted an illegal assembly and marched to the embassy in an effort to bring attention to the time King Maha Vajiralongkorn spends in Germany. The king in recent weeks has been in Thailand with a busy schedule of ceremonial events.

A statement from the protest group said they presented a letter to embassy officials asking that Germany investigate whether the king "has conducted Thai politics using his royal prerogative from German soil or not."

It said such action could be considered a violation of Germany's territorial sovereignty, and suggested that its government consider the protesters' request with the aim of bringing the king back to Thailand to restore the country "to the path of the truthful constitutional monarchy."

In addition to asking whether the king is carrying out his official royal duties in Germany, the letter provocatively echoed points on which the protesters have previously criticized the king.

Germany is seen as receptive to their entreaties.

The German government already brought up the issue in early October, when Foreign Minister Heiko Maas, responding to a question in Parliament, expressed concern over any political activities the king might be conducting in the country.

On Monday in Berlin, Maas spoke again, telling reporters the government was following developments in Thailand and was aware of the demonstrations and "people taking to the streets for their rights." He added that he also was watching the king's activities in Germany.

"We have been examining this not only in recent weeks, but we are continuing to examine it in the long term, and if there are things we feel to be unlawful, then that will have immediate consequences," Maas said.

Vajiralongkorn has for years spent significant time in Germany, but it only became an issue after the death of his father, King Bhumibol Adulyadej, in 2016.

Bhumibol was king for seven decades, and though he travelled extensively on state visits in the early years of his reign -- including being welcomed with a ticker tape parade in New York City -- he left the country only once after the 1960s, and that was an overnight stay in neighbouring Laos.

Vajiralongkorn's ability to spend time abroad has been made easier by changes his office sought and received to the current constitution that no longer require him to appoint a regent when away from the kingdom.

Defaming the monarchy can be punished by up to 15 years in prison under Thailand's tough lese majeste law.

Speaker of the House Chuan Leekpai cautioned at Monday's special Parliament session that it was not to discuss the role of the monarchy.

In his opening speech, Prime Minister Prayuth Chan-ocha said he and his government are aware that this is an era of change, pushed by technology.

"But we have to admit that in Thailand, millions, tens of millions of people do not want to see change through chaos," he said, referring to different points of view toward the protesters and their demands. "Everyone has their own beliefs."

He called for Parliament to "creatively find a balance" between competing views.

Prayuth, who led a coup in 2014 as the army chief, is disliked by the protesters, who say he was returned to power unfairly in last year's election because laws were changed to favour a pro-military party. The protesters also say the constitution, written and enacted under military rule, is undemocratic.

The non-voting session of Parliament is expected to last two days.

The protesters have little confidence in the parliamentary path, declaring the government's efforts insincere.

They said the points of discussion submitted by Prayuth's government for debate did not deal with the protesters' concerns and instead were thinly disguised criticisms of the protests themselves.

The points concern the risk of the coronavirus spreading at rallies, alleged interference with a royal motorcade by a small crowd earlier this month, illegal gatherings and the destruction of images of the royal family.

This story has been edited to correct the prime minister as saying "... people do not want to see change through chaos," instead of "... change though chaos."