Will Weissert The Associated Press
Published Tuesday, December 18, 2018 3:27AM EST 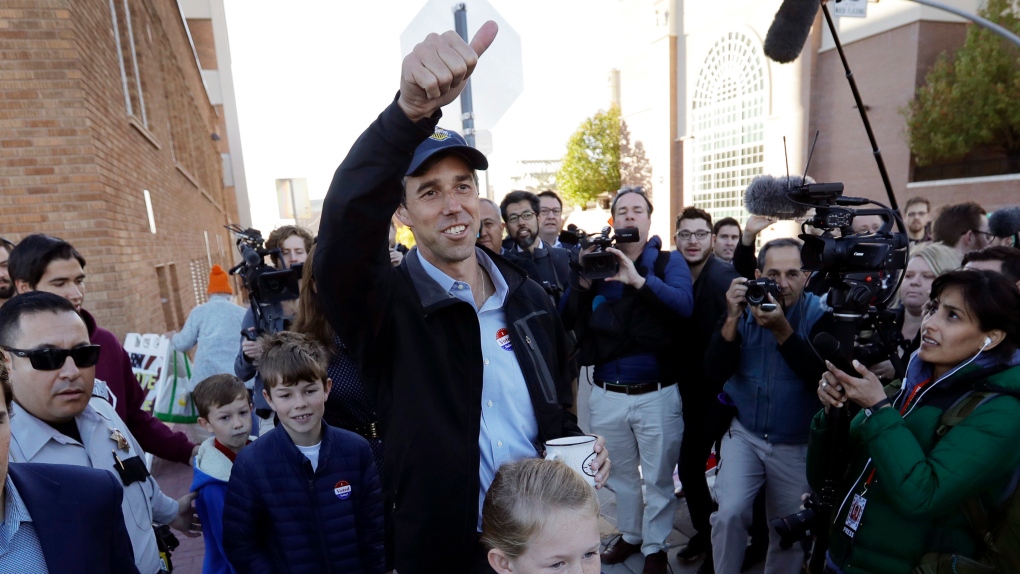 Rep. Beto O'Rourke, the 2018 Democratic Candidate for Senate in Texas, gives a supporter a thumps-up as he leaves a polling place with his family after voting, Tuesday, Nov. 6, 2018, in El Paso, Texas. (AP Photo/Eric Gay)

AUSTIN, Texas -- If the deep field of potential Democratic presidential contenders is on pins and needles as Beto O'Rourke decides his next move, it could be a long wait.

The outgoing Texas congressman's team says he has no timeline or roadmap for deciding if he'd like to parlay a surprisingly close loss to Republican Sen. Ted Cruz into a White House try. People close to O'Rourke insist he hasn't expanded staff or lined up consultants even as the interest in him intensifies. They say he's spoken to top Democratic donors, but describe such discussions as fact-finding missions, researching the logistics of a possible run rather than securing assurances that coming campaign cash would go to him and not others.

The only big date on his calendar is Jan. 3, when he finishes his congressional term.

"There's a lot of people waiting to see what he does," said Texas Democratic strategist Colin Strother. "And a lot of them are going to continue to wait."

O'Rourke's approach is different from many of the other Democrats eyeing White House bids. Julian Castro, a fellow Texan and former Obama administration housing chief, launched a presidential exploratory committee ahead of a more formal campaign kickoff that's expected on Jan. 12. Others, including Sens. Elizabeth Warren of Massachusetts, Kamala Harris of California and Cory Booker of New Jersey, have taken aggressive steps to lay the groundwork for potential campaigns that could be announced in the coming weeks.

But O'Rourke's backers say taking his time only makes him a more enticing presidential candidate, arguing that it's part of an unorthodox appeal that helped him come within three percentage points of upsetting Cruz in Texas, where no Democrat has won statewide office in a generation. They say that O'Rourke's charisma, as well as the $80-plus million from donors nationwide he racked up while running for Senate -- he has about $500,000 left -- ensures he could jump into the 2020 race late and still come out ahead.

Nate Lerner, a Democratic activist who is part of a "Draft Beto 2020" online group seeking to raise $1 million for an O'Rourke presidential run, said the congressman's Senate campaign was large enough that it could shift relatively seamlessly to a national organization -- and that many Democrats will be ready if and when that happens.

"There are a lot of people who are waiting to pick a horse," Lerner said.

For now, O'Rourke and his team remain in Washington, where they've had to surrender their congressional office since he gave up his seat to challenge Cruz. They're working from a basement cubicle in the Rayburn House Office Building, frequently talking a variety of topics with the congressman over lunch.

Prominent Democrats, notable donors to his Senate campaign and others are offering advice. The Rev. Al Sharpton along with current and former members of the House and Senate leave messages about 2020 on O'Rourke's cellphone, and he spends a lot of time returning calls. O'Rourke also has spoken with Barack Obama, while alumni from the former president's campaigns have formed online groups backing a would-be White House bid. O'Rourke also hasn't accepted -- nor declined -- invitations to visit Democrats in Iowa and New Hampshire, which kick off presidential primary voting.

A pivotal factor for O'Rourke is if he wants to again be away from his wife and three kids so much after seeing so little of them while running for the Senate. His wife, Amy, is one of the key people helping him mull over his next move, similar to how she was a top Senate campaign adviser, often included on email chains weighing new ideas and strategy.

O'Rourke himself has told reporters it's "crazy" that 2020 talk has heated up so early and said whether he can turn a Senate loss into a serious presidential run remains "a great question."

Meanwhile, the camp of 76-year-old former Vice-President Joe Biden has floated the idea of asking a younger candidate to join forces as a possible 2020 vice-presidential running mate and O'Rourke's name has been mentioned. The 46-year-old congressman hasn't dismissed the idea, saying only that he hasn't spoken to Biden.

There are risks for O'Rourke waiting too long. A key factor in his transformation from a virtual unknown outside his hometown of El Paso to a national political sensation was that O'Rourke announced his Senate bid early, more than 18 months before Election Day. Holding off could also put him behind other would-be candidates.

The longer he stays on the sidelines, the more time a possible backlash has to gather-- especially after months of glowing Senate campaign media coverage.

For starters, O'Rourke's legislative record is light. In his six years in Congress, he was the primary sponsor of just three bills that became law. One directed the U.S. Armed Forces to temporarily expand college tuition assistance, another sought to speed the appeals of veterans denied federal disability compensation. The third renamed El Paso's federal building and courthouse.