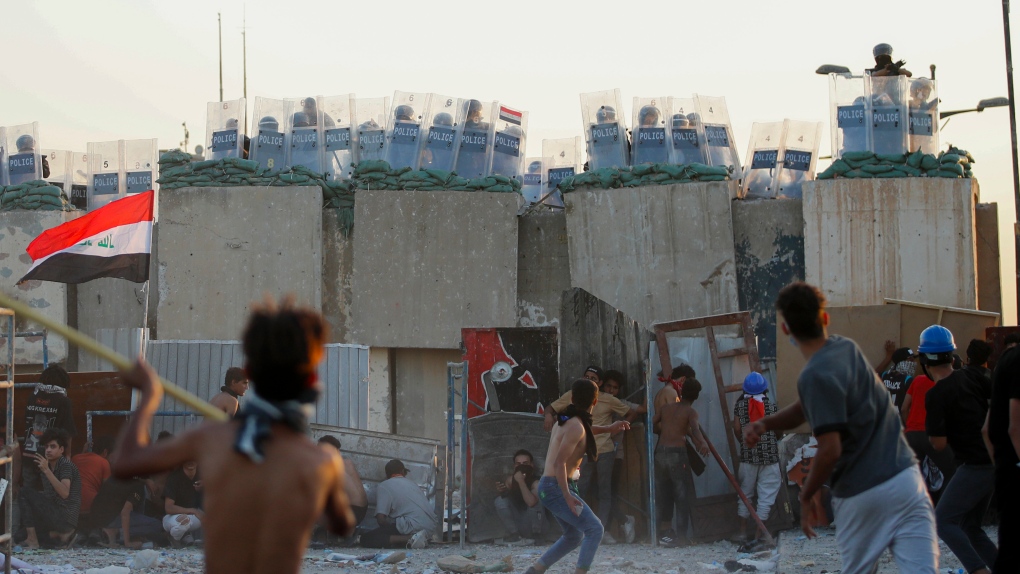 Anti-government protesters take cover from Iraqi Security forces who have closed a bridge leading to the Green Zone, during a demonstration as they gather to mark the third anniversary of the anti-government protests in Tahrir Square in Baghdad, Iraq, Saturday, Oct. 1, 2022. (AP Photo/Hadi Mizban)
BAGHDAD -

At least 64 people were wounded, including 26 members of the security forces, according to medical and security sources. The sources said that 38 of the protesters were hit by rubber bullets.

Security personnel had deployed checkpoints across the city, closed off bridges and squares and erected walls across some of the bridges leading to the fortified Green Zone that houses government headquarters and foreign embassies.

Protesters in the square waved the Iraqi flag and chanted "we want to overthrow the regime."

"We took part in today's peaceful protests because we want our demands to be met... we want security, jobs and our simple rights ... we are not here to fight or shed blood," said Laith, a young protester from Baghdad.

A few metres away, security forces fired tear gas and stun grenades to disperse protesters who had tried to tear down a wall blocking the Republic Bridge leading across the Tigris to the Green Zone, according to a Reuters reporter who witnessed the incident.

There were smaller protests in southern provinces.

In 2019, protests erupted against then prime minister Adel Abdul Mahdi's government with demonstrators demanding an overhaul of a political system they see as profoundly corrupt and keeping most Iraqis in poverty.

More than 560 people, mostly unarmed demonstrators but also members of the security forces, were killed as Iraqi security forces and unidentified gunmen cracked down.

Mahdi quit under pressure from the protests with powerful Shi'ite Muslim cleric Moqtada al-Sadr the biggest winner in an election last October.

Sadr in June withdrew all his lawmakers, nearly a quarter of parliament, and resorted to whipping up street protests after his movement failed to form a government, leading to some of the worst clashes the country has seen in years.

"Not this government and neither the previous one. We are against the political system in its entirety. We want drastic change. It is enough," said demonstrator and daily wage worker Yasser.

Saturday's gathering raised fears of more unrest and tension among power-hungry politicians that could further delay the formation of a government after Sadr quit politics at the end of August.

Four rockets landed in the Green Zone on Wednesday during a partial lockdown as parliament was convening, wounding seven security personnel, and another four rockets fired from eastern Baghdad landed around the zone on Thursday.