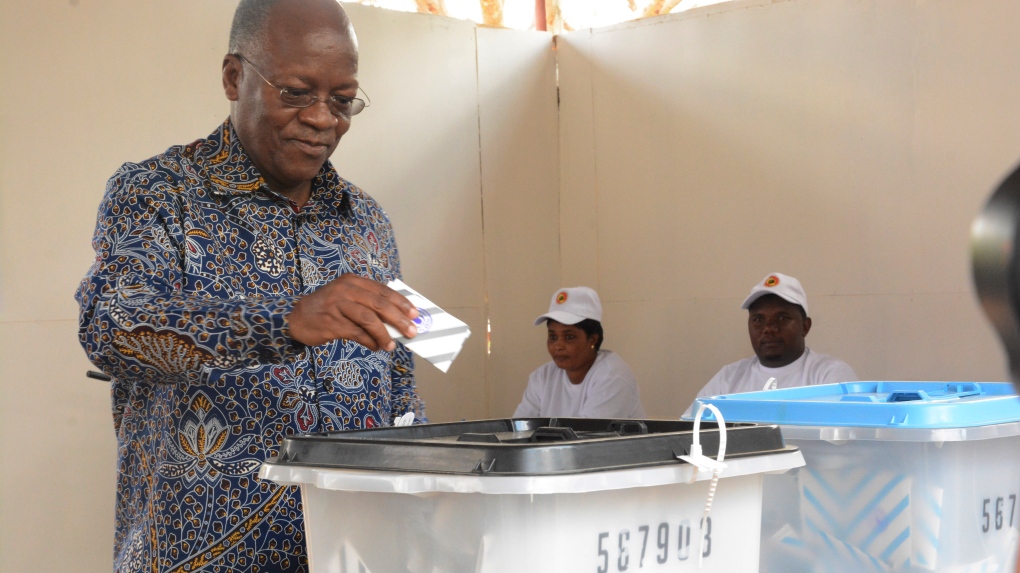 DODOMA, TANZANIA -- Tanzania's populist President John Magufuli has been declared the overwhelming winner of a second term amid allegations of widespread election fraud, while the ruling party won enough seats in parliament to change the constitution.

Some in the ruling party had called for the presidency's two-term limit to be extended if enough parliament seats could be secured.

Lissu has rejected the vote while alleging “widespread irregularities” and called for peaceful demonstrations. The opposition asserts that thousands of observers were turned away from polling stations on Wednesday, and that at least a dozen people were killed on the eve of the vote in the semi-autonomous region of Zanzibar. Internet and text-messaging services slowed dramatically or disappeared.

But electoral commission chair, Semistocles Kaijage, asserted in late Friday's announcement that all the votes were legitimate.

Large crowds of ruling party supporters who had gathered to watch the election results were celebrating in the streets. There was no immediate comment by the president.

The two main opposition parties, Lissu's CHADEMA and ACT Wazalendo, planned to to hold a joint press conference on Saturday, a spokesman said.

The U.S. has said that “irregularities and the overwhelming margins of victory raise serious doubts about the credibility of the results announced.”

Few international election observers were present, unlike in past years.

The vote “marked the most significant backsliding in Tanzania's democratic credentials,” Tanzania Elections Watch, a group of regional experts, said in an assessment released Friday. It noted a heavy deployment of military and police whose conduct created a “climate of fear.”

“The electoral process, so far, falls way below the acceptable international standards” for holding free and fair elections, the group said.

The opposition alleges widespread irregularities including double-voting and ballot box-seizing by security forces or other authorities.

The East African nation is one of Africa's most populous countries and fastest-growing economies. Magufuli has pointed to the country's achievement of lower-middle-income status as one reason he deserves another term.

But observers say Tanzania's reputation for democratic ideals is crumbling, with Magufuli accused of severely stifling dissenting voices in his first five-year term. Opposition political gatherings were banned in 2016, the year after he took office. Media outlets have been targeted. Some candidates were arrested, blocked from campaigning or disqualified ahead of the vote.

Concerns of post-election violence linger. The ACT Wazalendo presidential candidate in Zanzibar was arrested on Thursday for the second time this week before being released. Another ACT Wazalendo official there, Ismail Jussa, was badly beaten by soldiers and hospitalized, the party said.