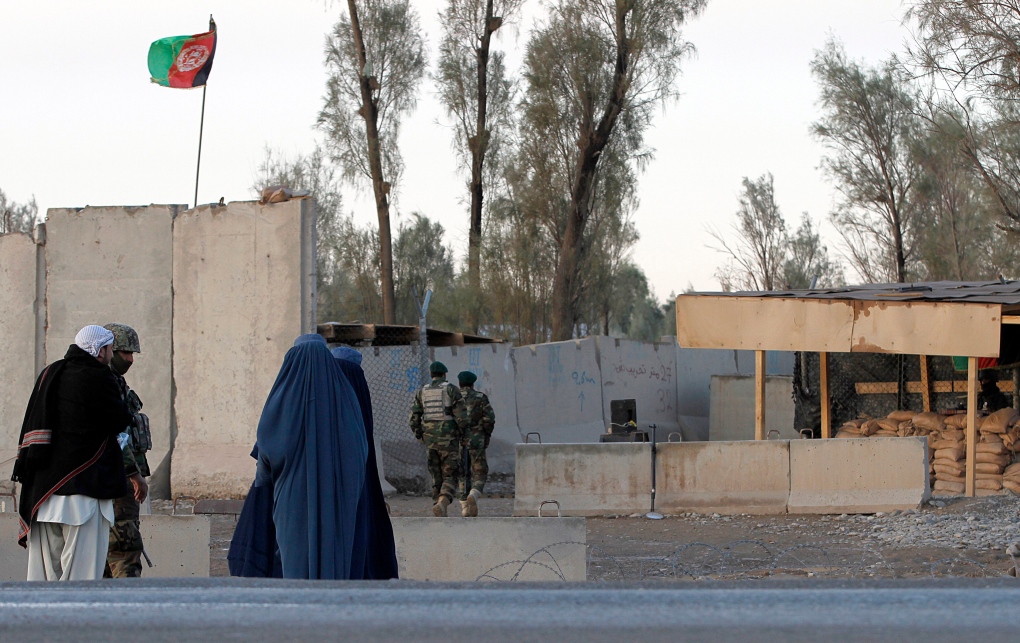 KANDAHAR, Afghanistan -- A brazen Taliban assault on an air base outside the southern Afghan city of Kandahar triggered a 24-hour gunbattle that killed at least 37 people and was still underway late on Wednesday, according to the Defence Ministry in Kabul.

The attack in Kandahar province -- a Taliban heartland -- comes as the insurgents have expanded their footprint in Afghanistan in recent months. Afghan forces have struggled to roll back the Taliban advances since the U.S. and NATO formally concluded their combat mission at the end of last year.

Also Wednesday, the Taliban seized a district in another southern province, Helmand, killing 14 Afghan security forces in a battle there.

The Kandahar airport attack, which began on Tuesday, also left 35 people wounded, a statement from the ministry in Kabul said, adding that nine attackers had also been killed and one was wounded. By evening Wednesday, one remaining attacker was still battling security forces, the statement said.

After nightfall, Afghan commanders on the ground in Kandahar said a clean-up operation was underway to check for any additional attackers and secure the area. The commanders spoke on condition of anonymity because they were not authorized to talk to the media.

A Taliban spokesman, Qari Yousaf Ahmadi, said in a statement that the insurgents were still attacking Afghan forces late Wednesday and had killed "many soldiers and destroyed vehicles and helicopters." The claim could not be verified, and the Taliban often exaggerate battlefield victories.

The sprawling airport in Kandahar is known as Kandahar Air Field. It has both a military and a civilian section, as well as a NATO base.

A NATO spokesman for the Resolute Support mission in Afghanistan said there were no coalition casualties in the Kandahar assault.

Speaking over the phone from Kabul, U.S. Army Col. Michael Lawhorn said the Taliban "never physically entered the airfield" in Kandahar but fired toward the air base from positions inside a local school nearby.

Rauf Ahmadi, spokesman for the provincial police chief, said the infighting between the Taliban erupted on Monday in the Zerko area and that about 30 fighters from both sides were also wounded.

"Since last two days of intense battle ... in Shindand district, there are reports of more than 100 Taliban fighters being killed from both sides," said Ahmadi. The fighting forced a number of villagers to flee, he said. There were no reports of civilian casualties so far.

Taliban spokesman Qari Yousof Ahmadi denied the infighting, saying instead that the Taliban are fighting local police forces in Shindand district in Herat.

Mansoor took control of the Afghan Taliban in August, after the announcement of the death of the group's founder, Mullah Mohammad Omar. Mansoor's leadership was challenged among some followers, and a breakaway Taliban faction emerged, followed by clashes between the two groups.

Mansoor has claimed widespread backing among Taliban leaders based in Pakistan and on the battlefield, and took credit for the Taliban's brief capture of the northern city of Kunduz in September.

Kunduz, the capital of the province with the same name, was held by the Taliban for three days before a government counter-offensive was launched. Afghan troops took more than two weeks to bring the city back under government control. Later, an Afghan investigation concluded that weak leadership, misuse of resources and lack of co-ordination between services were the main reasons Kunduz fell to the Taliban.

Also Wednesday, the Taliban attacked Afghan security forces and took control of Khanisheen district in southern Helmand province, according to Karim Atal, the head of provincial council of Helmand province.

At least 14 Afghan security forces were killed and 11 were wounded, said Atal.

"Khanisheen district was under attack in the past few days, but yesterday, the Taliban intensified their fight against the security forces and finally were able to get the control of whole district," he added.

The Taliban spokesman, Ahmadi, confirmed the seizure of the district.