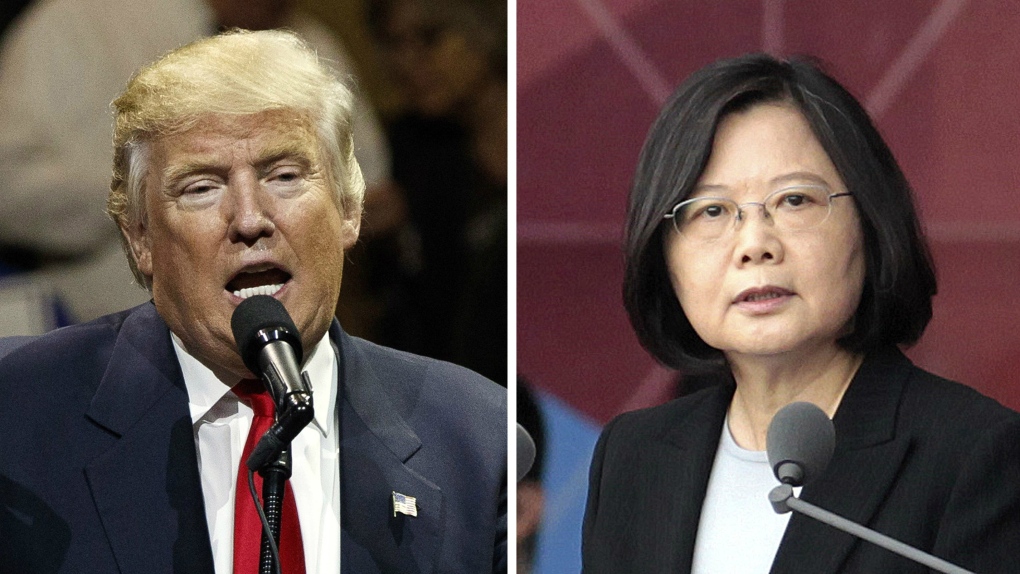 TAIPEI, Taiwan -- As Taiwan becomes a contentious issue between China and U.S. President-elect Donald Trump, Taiwanese are hoping it will lead to closer ties with Washington but are wary of becoming a bargaining chip between the world's two largest economies.

Trump's Dec. 2 phone call with Taiwanese President Tsai Ing-wen raised expectations that he will upgrade relations with the self-governing island with which Washington has only had unofficial ties since recognizing the Communist government on the Chinese mainland in 1979. Trump followed up the call with tweets and comments criticizing Chinese trade and foreign policy, stoking speculation about a major change in American policy toward the nearly 70-year-old regional rivalry.

But the euphoria has been tempered by worry about what might happen to Taiwan if Trump uses it to press Beijing on trade, China's territorial expansion in the South China Sea or its ties with North Korea.

"On the surface, it looks like this means America is getting closer to Taiwan," said Jonathan Wang, a civil engineering student at National Taiwan University in Taipei.

"But Trump is a businessman, so he has own considerations," Wang said. "If Taiwan becomes a bargaining chip in negotiations with China ... (Trump) might give up the goodwill."

The mix of excitement and fear poses a tricky challenge for Taiwan's government. Despite being shunned by Beijing for her pro-independence stance, Tsai has repeated over the past two weeks that she values ties with both China and the U.S.

China and Taiwan separated during a civil war in 1949 and Beijing continues to view the island as its territory, to be unified with by force if deemed necessary.

China suspended dialogue with Tsai's government shortly after her inauguration over her refusal to endorse its principle that the two sides are part of a single Chinese nation.

China already uses its diplomatic and economic heft to prevent Taiwan from making formal contacts with most other countries or joining international organizations such as the United Nations that require statehood as a prerequisite.

Since Tsai's May inauguration, Beijing has sought to increase the pressure by discouraging Chinese tourists from visiting Taiwan and blocking its participation in some international forums. As a further step, China could use its influence to win away Taiwan's remaining 22 diplomatic allies.

An indication of Trump's approach to the issue may come as soon as next month when Tsai is due to transit in the U.S. on her way to visiting allies in Central America. A Taiwanese foreign ministry official declined to say whether Tsai might meet Trump transition team members during the transit stop, something that has been hinted at by both sides.

Many Taiwanese expect a new relationship with Washington to bring economic advantages for their export-dependent half trillion-dollar economy, long-term access to senior U.S. officials and more sales of advanced U.S. weapons to defend against China.

Washington has been Taipei's staunchest ally and chief arms supplier since the break in diplomatic ties, despite occasional protests from Beijing. The United States approved a $6.4 billion arms package for Taiwan in 2010 and a $1.83 billion one in 2015.

"Trump is a businessman, and he always thinks about making money so he's probably thinking of Taiwan as a good source of buying U.S. arms in the future," said Shane Lee, a political scientist at Chang Jung Christian University in Taiwan.

Regardless of the outcome, the Taiwanese public has warmed to Trump following his outreach to the island's government, said Lee Chun-yi, a legislator from a southern Taiwan city where distrust of China runs high.

"Before the election people were kind of down on Trump, and now they're really keen on him," Lee said. "The public sees Taiwan as a sovereign country. We hope there can be more contact."

A stronger relationship with the United States could help Taiwan make contacts in India and countries in Southeast Asia, part of Tsai's strategy of reducing economic reliance on mainland China, said Douglas Hsu, deputy director-general of North American affairs with the foreign ministry.

Yet people on the island are also bracing themselves for a backlash from Beijing or some form of a grand bargain between China and the U.S., analysts say. Taiwanese have long been inured to Beijing's hostility and the international isolation it seeks to impose.

"Most of my colleagues are really, really worried about that, because Taiwan would serve as a pawn between major powers," said Nathan Liu, an international affairs and diplomacy professor at Ming Chuan University in Taiwan.

The major risk, Liu says, is that Trump might trade support for Taiwan to gain economic concessions from the mainland. "Taiwan will be virtually abandoned by the United States because it's that bargaining chip," he said.

China considers recognition of Taiwan to be non-negotiable and lodged a diplomatic protest after the Trump-Tsai phone call. Faced with Beijing's hard-line position, some Taiwanese question whether Trump has the diplomatic chops to negotiate the tricky trilateral relationship.

"Trump is an economic success but on politics he lacks the foresight of (Hillary) Clinton," said retired Taiwanese high school teacher Chao Chiu-chin, referring to Trump's Democratic Party rival and former U.S. secretary of state. "We can't predict. But Trump is strong and (Chinese President) Xi Jinping is strong. That won't be good for the experience of Taiwan."

Ultimately, Trump's approach is seen as shaking up established U.S. policy toward Taiwan, for better or for worse.

"This is a crisis as well as an opportunity," Taiwan legislator Lo Chih-cheng said.