Syrian forces prepare to open corridors out of Aleppo 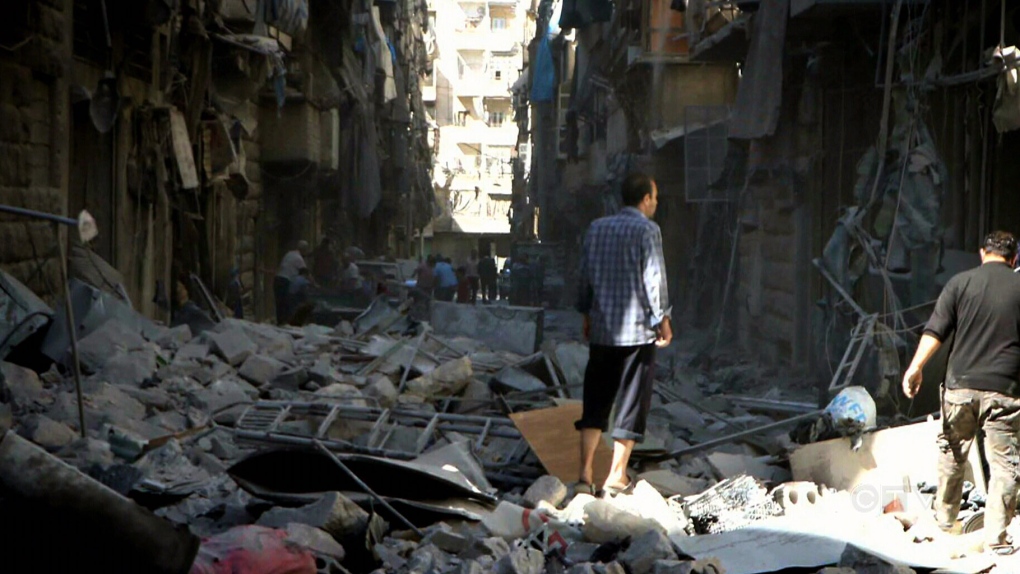 BEIRUT -- Hundreds of residents left a formerly rebel-controlled suburb of the Syrian capital of Damascus Wednesday, as government and Russian forces prepared to open corridors out of the contested city of Aleppo in the hopes of facilitating an exodus from its rebel-held quarters.

Aleppo's besieged eastern quarters experienced relative peace for the second consecutive day in the run-up to the hoped-for evacuation Thursday, after weeks of bombardment left the area in ruins. Russia's military has promised two corridors will be opened for militants to flee to the neighbouring rebel-held province of Idlib, between 8 a.m. and 7 p.m, while other corridors will allow civilians to move to government-held areas.

The government's overture to rebels and civilians trapped in Aleppo's east follows a pattern of evacuations around the country that the UN has likened to "forced displacement." On Wednesday, some 2,000 residents of the once autonomous Moadamiyeh suburb of Damascus were carried by government buses to Idlib as part of an arrangement to restore government control after three years of siege at the hands of the military.

Hassan Ghandour, a former Moadamiyeh resident who liaised between the suburb and besieging forces, said Wednesday the evacuees included 700 gunmen. He said the government is to release all detainees from the suburb in exchange for the evacuation.

Several activists also left with the convoy. Wassim al-Ahmad told The Associated Press it would be "impossible" to live again under government authority, saying he didn't trust official promises for amnesty.

Some of those remaining in Moadamiyeh struck a defiant tone.

"I'm not going to settle anything with the government," said local resident Mahmoud, who declined to give his family name out of safety concerns. "I'm going to stay in my home."

"I've spent five years of my life besieged here. I've been through war, siege, starvation, ... bombardment, and poison gas - I've survived with all this so I can stay here."

The suburb and two other areas around the capital were gassed with sarin poison in 2013, according to a UN investigation. A Human Rights Watch report concluded the government was the most likely culprit.

Some 28,000 people remain in Moadamiyeh, down from a pre-war population of 105,000, according to the government.

In Aleppo, government buses queued at checkpoints leading to the besieged east prepared to take evacuees to Idlib on Thursday, according to the media arm of the Lebanese militant group Hezbollah, which is fighting alongside the government in Syria.

The government's foreign ministry said soldiers were withdrawing from the designated corridors to reassure evacuees.

It is unclear how many people will take up the government's offer after weeks of siege and bombardment pulverized the east and shattered its medical network.

The Britain-based Syrian Observatory for Human Rights says more than 640 people, including 128 children, have been killed in rebel-held parts of Aleppo and the surrounding rural areas since a truce brokered by the U.S. and Russia collapsed on September 19. It said 88 people, including 14 children, were killed in retaliatory shelling on government-held Aleppo.

Bassam Heji, a member of the Nour el-Din al-Zinki rebel faction, said the Russian offer is a "trap" that only reflects its intention to "exterminate" the residents of the eastern, rebel-held Aleppo neighbourhoods.

The arrangement follows a proposal by the UN Syria envoy, Staffan de Mistura, to allow al Qaeda-linked militants to leave Aleppo in exchange for a truce and local autonomy for the city's eastern districts. Rebels, along with many residents, rejected the offer.

But Russia and Syria moved ahead unilaterally with the evacuation arrangements without making any promises for an extended cease-fire or self-administration.

Russian Foreign Ministry spokeswoman Maria Zakharova said the break in fighting should allow the moderate opposition in the east to sever ties with militants.

Erdogan warned about the possibility of an influx of at least one million people to Turkey in the event of a population movement from Aleppo.

"We cannot pay this cost. Those who incite this must sit down with Turkey and talk," he said.

Elsewhere, a 44-truck convoy delivered food aid and health supplies to the rebel-held pocket of Douma, east of Damascus, the UN and the Syrian Arab Red Crescent said. The suburb and surrounding towns are besieged by pro-government forces.

The Russian military accused a U.S.-led coalition airstrike of killing six civilians in Hassajek, hours before the announcement that the village had been taken from IS.

Despite the brief lull in the fighting for Aleppo, most of the surrounding province has become Syria's hottest theatre of combat, showcasing the complexity of the terrain where rival forces are vying for control.

In the area of Hassajek, three rival groups are battling IS: the Kurdish-led forces, Turkey-backed Syrian rebels and troops loyal to the government of President Bashar Assad.

The Britain-based Syrian Observatory for Human Rights said the Kurdish-led forces, known as the Syrian Democratic Forces, gained control of Hassajek, killing at least 10 IS militants in fighting there.

One of the fighting units in SDF, the Rebel Army, said in a statement that the clashes with IS militants continued for the third straight day further to the south. It said its troops also seized weapons and ammunition from IS.

The advance by the Kurdish-led forces has widened the front line between them and rival Syrian rebels, who in recent weeks have pushed into northern Aleppo backed by Turkish tanks and aircraft, driving out the Islamic State group from villages and towns it controlled. The Turkey-backed offensive also aims to undercut Kurdish aspirations for a contiguous and independent east-to-west stretch of territory in Syria.

Russian military surveillance spotted two Belgian F-16 fighter jets over the area at the time of the strike, the centre said, adding that Russian and Syrian warplanes were not flying over the area. Russia's Tass news agency reported from Brussels that the Belgian defence minister denied Belgian aircraft had struck the area.