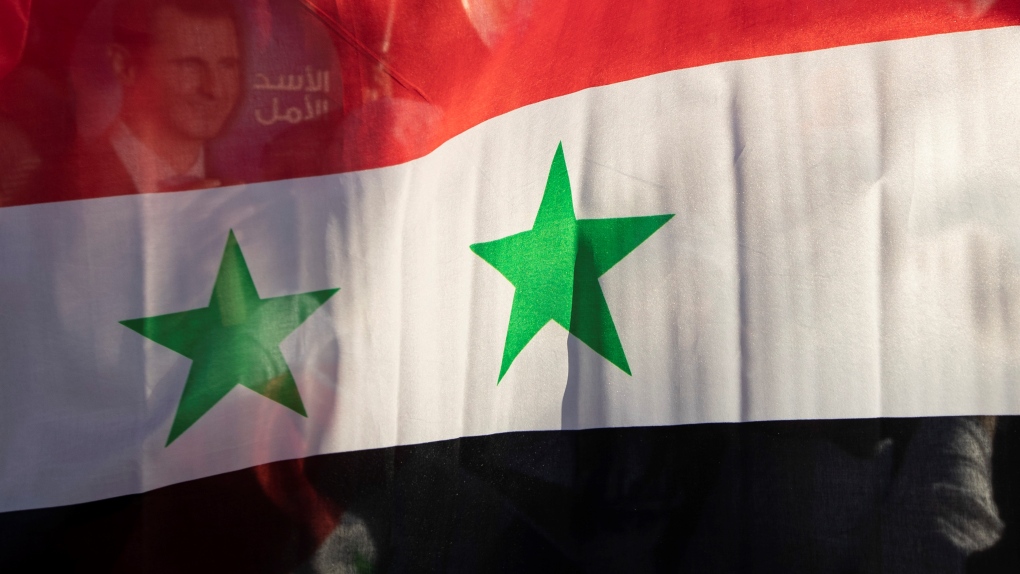 In this May 23, 2021, file photo, the Syrian national flag is displayed at a gathering at Omayyid Square in the Syrian capital Damascus, Syria. (AP Photo/Hassan Ammar, File)
DAMASCUS, Syria -

Israel launched a missile attack on western Syria Sunday night and explosions were heard in the coastal region of the war-torn country, Syrian state media reported. There was no immediate word on casualties.

Syrian state TV reported that Israel's military targeted several positions in the province of Tartus without giving further details. The TV said the missiles were fired by warplanes flying over neighbouring Lebanon.

The Britain-based Syrian Observatory for Human Rights, an opposition war monitor, said the Israeli strike targeted a Syrian army air defence base in the area of Abu Afsa. It added that Iran-backed fighters are usually in the base.

Israel has carried out hundreds of strikes on targets inside government-controlled parts of Syria over the past years, but rarely acknowledges or discusses such operations.

Israel has acknowledged, however, that it targets bases of Iran-allied militant groups, such as Lebanon's Hezbollah that sent thousands of fighters to fight alongside Syrian President Bashar Assad's forces.

The Conservatives are calling on the federal government to allow the importation and sale of foreign language-labelled versions of the same formulations of over-the-counter paediatric pain medication, in response to an ongoing nationwide shortage.

Tom Mulcair: What Legault's win might mean for the future of Canada

State of emergency declared in northern N.S., thousands still without power on P.E.I.

More than 16,000 customers in Nova Scotia and Prince Edward Island are still without electricity 12 days after post-tropical storm Fiona hit the Maritimes on Sept. 23. The ongoing outages and restoration efforts have prompted the Nova Scotia government to declare a state of emergency in several counties in northern Nova Scotia.