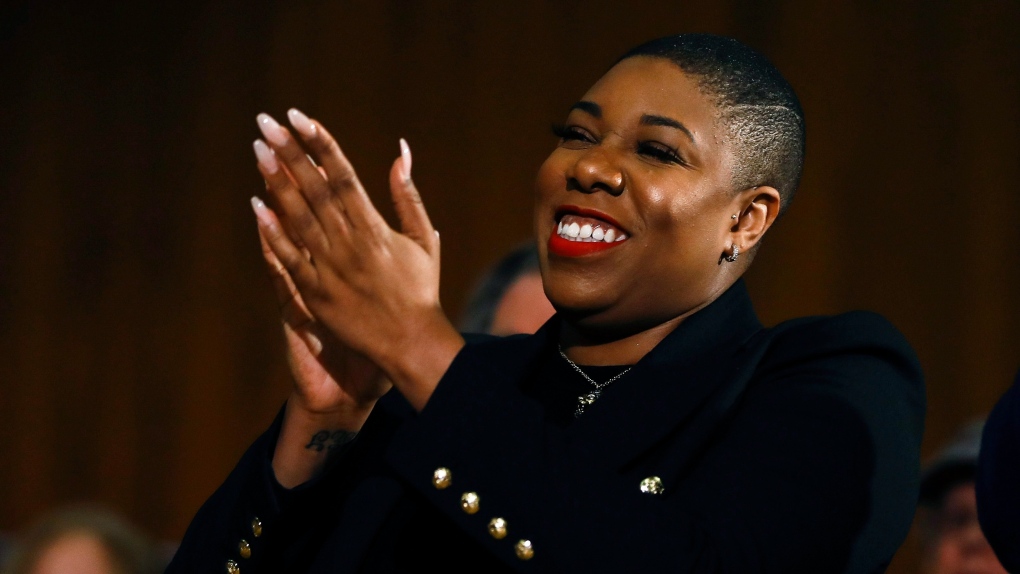 Symone Sanders, Vice President Kamala Harris' chief spokesperson and senior adviser, is leaving the Biden administration at the end of the year, according to a source familiar with the decision.

"Symone has served honorably for three years," the source told CNN. "The President and vice president are grateful for Symone's service and advocacy for this White House. She is a valued member, a team player, and she will be missed. We are grateful to have her working through the end of the year."

News of each departure followed a myriad of reports, including by CNN, of staff infighting and dysfunction. Still, the source dismissed that Sanders' exit has to do with reports of dysfunction, calling it the right time for her to go.

Harris has known for some time about Sanders' upcoming departure, according to a second source familiar.

Anita Dunn, a former top Biden aide, praised Sanders as "an extraordinary talent" in an interview with CNN on Wednesday night.

"Symone has been working at the highest levels and in an extraordinarily intense environment for three years for Joe Biden. And now also for Vice President Harris," Dunn said. "When you look at the three years, two on the campaign, one in the White House, nobody can question her decision that she needs a break and it's time to move on. And she'll always be a member of the Biden-Harris family."

Sanders, a 31-year-old African American political strategist, joined the White House from Joe Biden's 2020 presidential campaign, on which she served as a senior adviser. She was also the national press secretary for Vermont Sen. Bernie Sanders' 2016 presidential campaign and was a political analyst for CNN prior to joining Biden's campaign.

During her time in the vice president's office, Sanders helped lead messaging for Harris, who has been tasked with what allies and supporters view as a thorny portfolio. Adding another dimension to Sanders' efforts, Harris -- who has been dogged with messaging challenges since her unsuccessful presidential campaign -- has publicly fumbled the White House's message during her time as vice president.

In February, West Virginia Democratic Sen. Joe Manchin expressed frustration over a television interview Harris did in his home state to promote the American Rescue Plan, suggesting the administration did not give him a heads up.

During her first foreign trip, Harris -- who heads diplomatic efforts to stem migration from the Northern Triangle -- had to deal with the fallout over her response about why she has not at that point visited the US-Mexico border as vice president.

And over the summer, White House had to dive into damage control following reports of dysfunction within Harris' staff.

The interview during which she made the border comment came after Harris had participated in a wide-ranging media training session to improve her delivery and presentation in interviews and speeches. That training had been one of several sessions over the last year, according to multiple sources.

In September, the vice president's office also attempted to contain the fallout over Harris' lack of pushback in an exchange with a student who characterized Israel's actions toward Palestinians as "an ethnic genocide and a displacement of people."

Since the messaging missteps, the vice president's office has hired two communications veterans -- Lorraine Voles, a crisis communications specialist, and Adam Frankel, a former Obama speechwriter -- to focus their efforts on "organizational development, strategic communications and long-term planning," according to the White House.

Sanders had previously made her White House ambitions known, writing in her 2020 memoir, "No, You Shut Up," "One day I want to be White House press secretary."

Bakari Sellers, a friend of Sanders, told the Washington Post this past spring that the decision to make Jen Psaki the White House press secretary "stung" Sanders and that being passed over "hurt."

Harris' team will likely see other exits over time.

"Offices reconstitute themselves. Symone is not the last person who will leave the White House," Dunn told CNN.