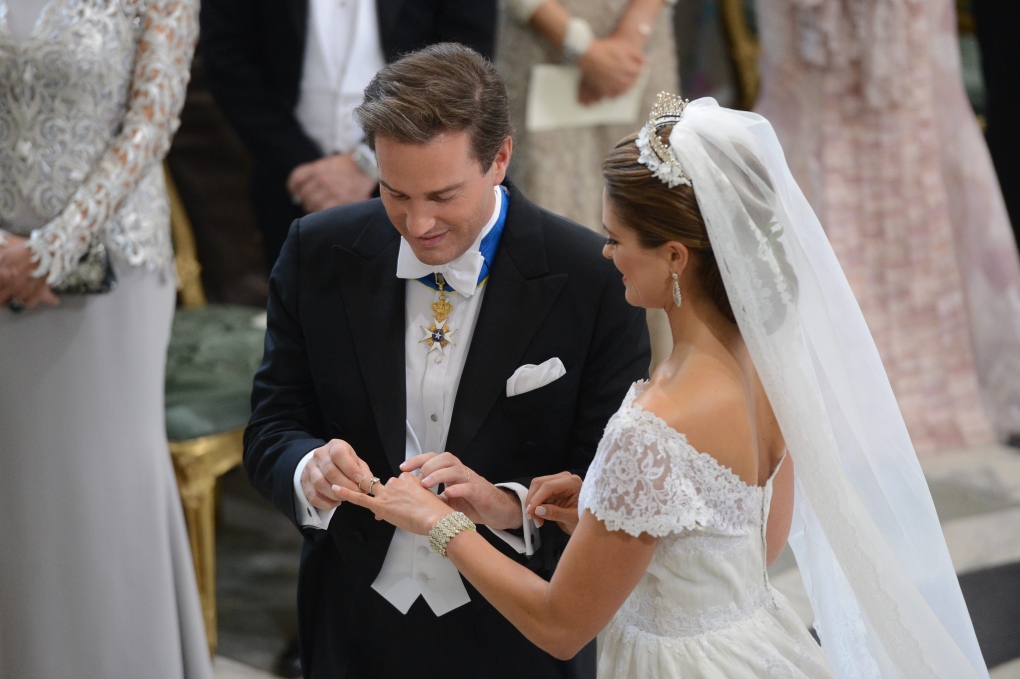 Princess Madeleine of Sweden and Christopher O'Neill during their wedding ceremony at the Royal Chapel in Stockholm, Saturday, June 8, 2013. (AP / Fredrik Sandberg)

STOCKHOLM, Sweden -- Swedish Princess Madeleine fell in love in the Big Apple. Now she has said "yes" to New York banker Christopher O'Neill in a lavish and emotional wedding ceremony in Stockholm.

Madeleine, 30, was wearing a stunning silk organza dress with a lace top and four-meter (13-foot) trail, designed by Valentino Garavani, when she tied the knot with British-American O'Neill on Saturday. Around 470 European royals, top New York socialites and celebrities were in attendance.

The 38-year-old O'Neill fought back tears as the princess walked down the aisle with her father, King Carl XVI Gustaf, to a traditional Swedish wedding march performed by a children's choir. The bride and groom were visibly moved as the ceremony proceeded with hymns in both Swedish and English, and performances by Roxette singer Marie Fredriksson and Broadway's "Phantom of the Opera" star Peter Joback.

With a smile on her face, Madeleine read out the wedding vows in Swedish while O'Neill read his in English in the Royal Chapel, decorated with typical Swedish summer flowers. After the wedding, the couple kissed on the steps of the palace in front of a cheering crowd of several thousand who had gathered in the sunshine waving Swedish flags.

"We hope she will be very happy in the future, the princess Madeleine," Julia Huelsman, who had travelled from Munich, Germany, for the occasion, said.

Later, the newlyweds will travel in a procession through the capital in a special horse and carriage. They will then sail to the royal residence and UNESCO World Heritage site Drottningholm Palace, 10 kilometres (6 miles) west of the city centre, where a private wedding reception will be held.

Madeleine is the youngest of Carl XVI Gustaf and Queen Silvia's three children and fourth in line to the throne. She became known as Sweden's party princess in her early 20s, when she was frequently spotted at Stockholm's high-end nightclubs, and has attracted widespread attention for her stylish clothes.

But her life hasn't always been a fairytale. Madeleine's extravagant lifestyle has often been criticized by Swedes, who prefer the down-to-earth attitude of her sister, Crown Princess Victoria, who married a commoner. And in 2010, she fled to New York after breaking off her first engagement to Swedish attorney Jonas Bergstrom amid media reports that he had cheated on her.

Since then, Madeleine has held a lower profile, working for the non-profit World Childhood Foundation in New York, where she met O'Neill through mutual friends. The couple was first spotted together having lunch at the Central Park Boathouse in January 2011 and they announced their engagement in October 2012.

O'Neill was born into a wealthy family. His late father, Paul O'Neill, set up the European head office of Oppenheimer & Co. in London in the 1960s and his mother, Eva Maria O'Neill, is involved in several charities. He studied at a boarding school in St. Gallen, Switzerland, and holds a bachelor's degree in international relations from Boston University and a master's degree from Columbia Business School in New York.

O'Neill, who holds dual American and British citizenship, has declined a royal rank in Sweden, which would have required him to become a Swedish citizen. He has chosen to continue working and the newlyweds are expected to move back to their apartment in Manhattan.

Guests at the wedding included the U.K.'s Earl and Countess of Wessex, Prince Edward and Sophie; Princess Takamado of Japan and princes and princesses from Norway, Denmark, Greece, Luxembourg and Monaco.

The marriage is the latest in a series of glamorous royal weddings that have mesmerized Europe in the past few years. In June 2010, Madeleine's older sister Crown Princess Victoria wed her personal trainer Daniel Westling in a grand ceremony in Stockholm and the year after, Britain's Prince William and Kate Middleton tied the knot in extravagant fashion in front of an estimated 2 billion television viewers. Also in 2011, Prince Albert II of Monaco wed Charlene Lynette Wittstock and in 2012, Prince Guillaume of Luxembourg united with Belgian Countess Stephanie de Lannoy.

The Swedish royal family has only ceremonial duties, such as attending award ceremonies, promoting Swedish businesses abroad and supporting charities. As the head of state, the king also receives foreign dignitaries on formal visits to Sweden. 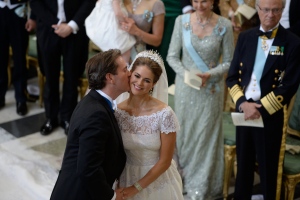