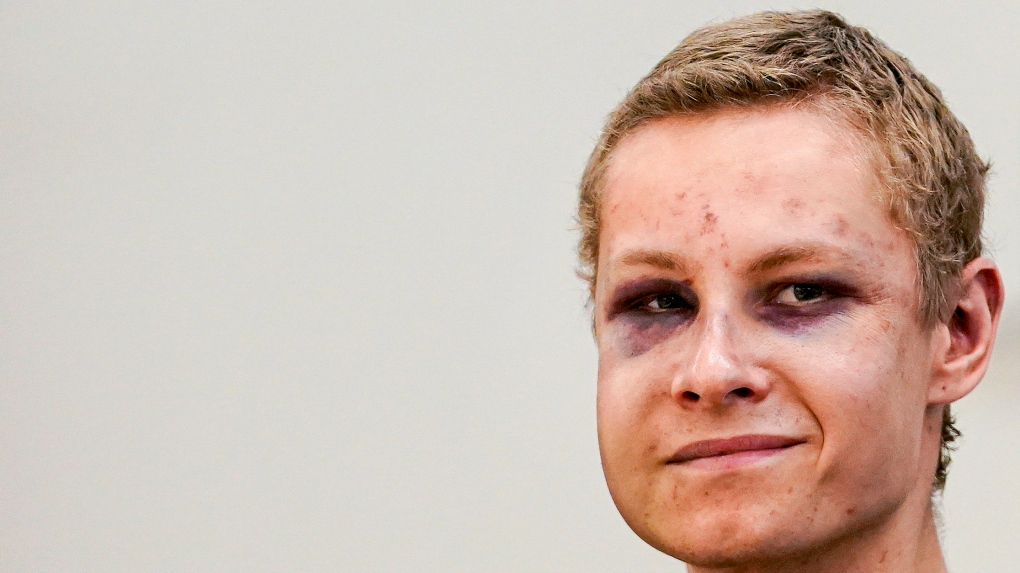 A Norwegian man suspected of killing his stepsister and then storming an Oslo mosque with guns appeared in court Monday with a smirk on his bruised face as evidence grew that he sought to emulate attacks by white supremacists in the U.S. and New Zealand.

Security experts believe Philip Manshaus is the latest example of an extremist who was radicalized by far-right conspiracy theories spread online, particularly the "great replacement" theory, which falsely warns of a "genocide" in which white people are being replaced by immigrants and Muslims.

Manshaus, 21, was arrested Saturday after entering a mosque in the Oslo suburb of Baerum, where three men were preparing for Sunday's Eid al-Adha celebrations. Police said he waved weapons and fired several shots.

They did not specify what type of weapon was used. One person was slightly wounded before people inside the Al-Noor Islamic Center held the suspect down until police arrived.

Police then raided Manshaus' nearby house and found the body of his 17-year-old stepsister, identified Monday as Johanne Zhangjia Ihle-Hansen, who was reportedly adopted from China as a 2-year old. Manshaus is suspected in her killing, police said, but they did not provide details.

With signs of his struggle still visible in the dark bruises under both eyes and scratches on his face and neck, Manshaus entered a court in Oslo. In a closed-door hearing, he did not admit guilt and asked to be set free, his lawyer, Unni Fries, told The Associated Press.

The court ordered him held in pre-trial detention for four weeks, two of which will be in solitary confinement.

The head of Norway's domestic security agency PST, Hans Sverre Sjoevold, said authorities received a "vague" tip a year ago about the suspect, but it was not enough to act because they had no information about any "concrete plans" of attack.

Sjoevold told a news conference that the agency and the police receive many tips from worried people every day and the information "didn't go in the direction of an imminent terror planning."

"Many of the people who have right-wing attitudes share a violent mindset, but experience shows that very few go from word to action. Therefore, it is a demanding mission to capture and prevent those who have the ability and will to carry out attacks," Stoevold said.

Norwegian media reported that Manshaus was inspired by shootings in March in New Zealand, where a gunman targeted two mosques, killing 51 people, and on Aug. 3 in El Paso, Texas, where an assailant targeted Hispanics and left at least 22 dead.

Dagbladet, one of Norway largest newspapers, reported that on the day of the attack, Manshaus wrote online that he had been "chosen" by "Saint (Brenton) Tarrant," the Christchurch gunman.

Saturday's attack came amid the rising popularity of far-right parties across the Nordics, fueled in part by a surge of migration into Europe in 2015. Groups that were once taboo have gained some social acceptance and influence. Extremists groups increasingly manifest their beliefs openly in ways that were once unheard of.

Magnus Ranstorp, the lead terrorism researcher at the Swedish Defence University, said the rise of violent far-right extremism is being driven by a complex overlapping of elements, including hateful rhetoric and conspiracies on social media and "old Nazis combining with the alt-right, combining a race war with a cultural war."

Adding to that are state actors, like Russia with its propaganda outlets, and President Donald Trump seeking to sow tensions and break down trust in established elites and the media.

"The leader of free world is part of the problem," Randstorp said.

"We are in a hybrid threat environment -- we are not in peacetime," Randstorp added. "Liberal democracy is under threat."

Another security expert, Olivier Guitta, said the recent white nationalist attacks against Muslims do not appear to be revenge for jihadist terrorist attacks. For now, he said, there is no far-right global terror organization in the mould of al-Qaida or Islamic State that attackers "could belong to or claim responsibility for."

But "both far right and Islamist extremism feed off each other" and both have "the same goal to spread chaos within our Western societies," said Guitta, managing director of GlobalStrat, an international security consultancy.

Across the country, police have reinforced security measures in connection with Eid, which runs through Thursday.

The suspect's thwarted plans recall those of the Norwegian right-wing extremist who in 2011 killed 77 people in 2011. Anders Behring Breivik is serving a 21-year prison sentence for carrying out a terror attack.

Breivik ranted about Europe being overrun by Muslim immigrants and blamed left-wing political forces for making the continent multicultural.

Almost 4% of Norway's 5.3 million people are refugees, and roughly 12% of the population consists of immigrants or children of immigrants, according to official figures.

Olsen reported from Copenhagen, Denmark, and Gera from Warsaw, Poland.