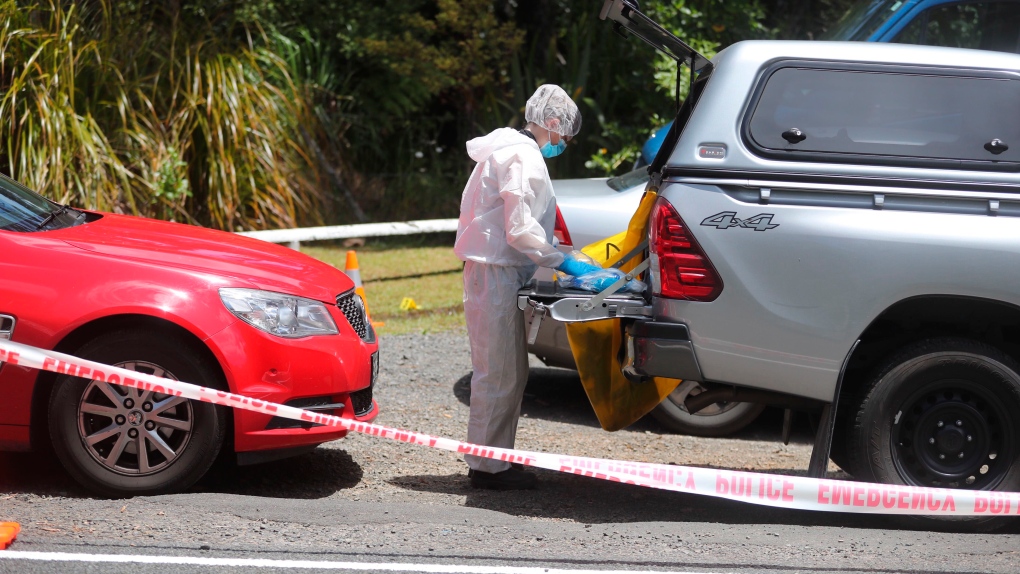 A police officer investigating the murder of British tourist Grace Millane stands at a crime scene along a section of Scenic Drive in the Waitakere Ranges outside Auckland, New Zealand, Sunday, Dec. 9, 2018. (Doug Sherring/New Zealand Herald via AP)

WELLINGTON, New Zealand -- The man accused of murdering British tourist Grace Millane in New Zealand will continue to keep his name secret while a judge decides whether he can be publicly identified.

The 27-year-old man appeared Thursday in Auckland's High Court. His lawyer argued his name should continue to be kept secret so he can get a fair trial, according to Radio New Zealand. A judge said he would announce a decision later.

The case has highlighted the difficulty of courts maintaining secrecy in an age when information is quickly disseminated around the world.

Last year, some British media decided to name the man in defiance of New Zealand court orders. Search giant Google then emailed the name to some users who were signed up for alerts on what was trending in New Zealand, resulting in a rebuke from Justice Minister Andrew Little.

Google later said it would review its processes.

The death of the 22-year-old backpacker last December struck a deep chord in New Zealand. Prime Minister Jacinda Ardern made an emotional apology to Millane's family and more than 1,000 people attended candlelight vigils.

Millane had been travelling in New Zealand for less than two weeks as part of a planned yearlong trip abroad that began in Peru. She was staying at a backpacker hostel in Auckland when she went missing Dec. 1.

Detective Inspector Scott Beard said she met a man for a couple of hours in the evening before surveillance cameras showed them entering the CityLife hotel together. Police have declined to comment on reports she met the man on the dating app Tinder.

The man's trial is scheduled for November.