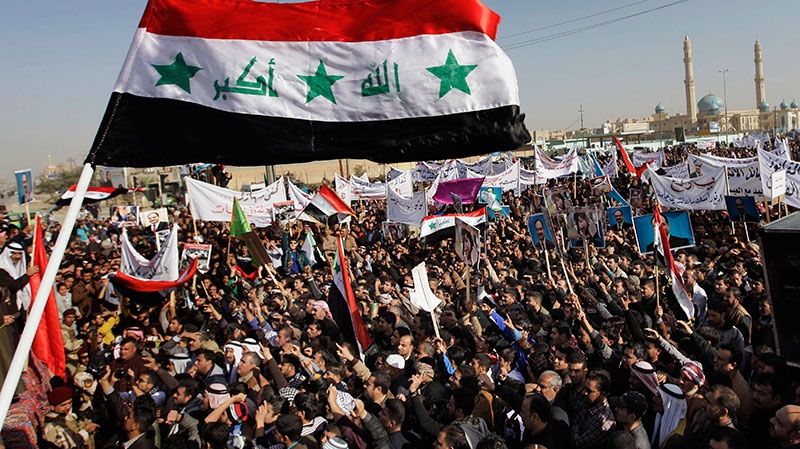 The dispute threatens to exacerbate tensions with Iraq's Sunnis, who accuse Shiite Prime Minister Nouri al-Maliki of targeting and marginalizing them. The sectarian conflicts have largely paralyzed the government and have often turned violent.

On Friday, Iraq's Shiite-led government said it arrested 10 of Finance Minister Rafia al-Issawi's bodyguards on terrorism-related charges. The government said it carried out the arrests according to the law and opposes any efforts to sow sectarian discontent.

In al-Issawi's hometown of Fallujah, some demonstrators covering their faces with red-checkered traditional tribal headdress carried pistols under their clothes. Others held flags from the era of deposed dictator Saddam Hussein and those now being raised by Syrian anti-government rebels.

It was the second time in three days that protesters in Anbar province have flocked into the streets.

The protesters held banners denouncing what they called the "irresponsible practices" of the Shiite-led government against Sunnis and demanded the immediate release of al-Issawi's bodyguards. Other banners mocked that anti-terrorism law they charged applies only to Sunnis, while protesters chanted, "Down, Down al-Maliki."

Ali al-Moussawi, a spokesman for al-Maliki, said the demonstrations were aimed to create nationwide chaos and revive the sectarian conflict in the country.

"Raising the old Iraq flag means that there were people affiliated to the previous regime that cannot live in the new Iraq," al-Moussawi said. "The Iraqi government respects demonstrations and their demands if they are in line with the law, but such demonstrations where the old flag is raised and sectarian slogans are used aim only at creating chaos."

"The injustice has reached its highest levels," said one demonstrator, who gave only his nickname, Abu Nouri, for security reasons. "Nouri al-Maliki is doing nothing for Iraqis," he said. "He's only busy removing political rivals from his path in the name of democracy and law."

"Why doesn't al-Maliki go after criminals and outlaws among the Shiites who sit in parliament and government, and are well-known for their atrocities over the years?" said another protester, who called himself Abu Omar al-Falluji, using a nickname for security reasons. "The answer is clear. He wants to shut the mouths that criticize him to turn this country into a pure Shiite one affiliated to Iran," he charged.

The case of al-Issawi will likely fuel the simmering political infighting over power sharing in post-Saddam Iraq.

On Friday, Sunni Deputy Prime Minister Saleh al-Mutlaq threatened that his Iraqiya bloc could withdraw from the political process altogether if lawmakers and independent bodies are not allowed to monitor the investigation involving al-Issawi's staff.

The arrests came a year after the government arrested nearly 70 bodyguards assigned to Sunni Vice-President Tariq al-Hashemi on terrorism-related charges. Then al-Hashemi himself was convicted of orchestrating death squads, a charge he dismissed as politically motivated.

Iraqi courts have since handed down multiple death sentences against him. He now lives in neighbouring Turkey.