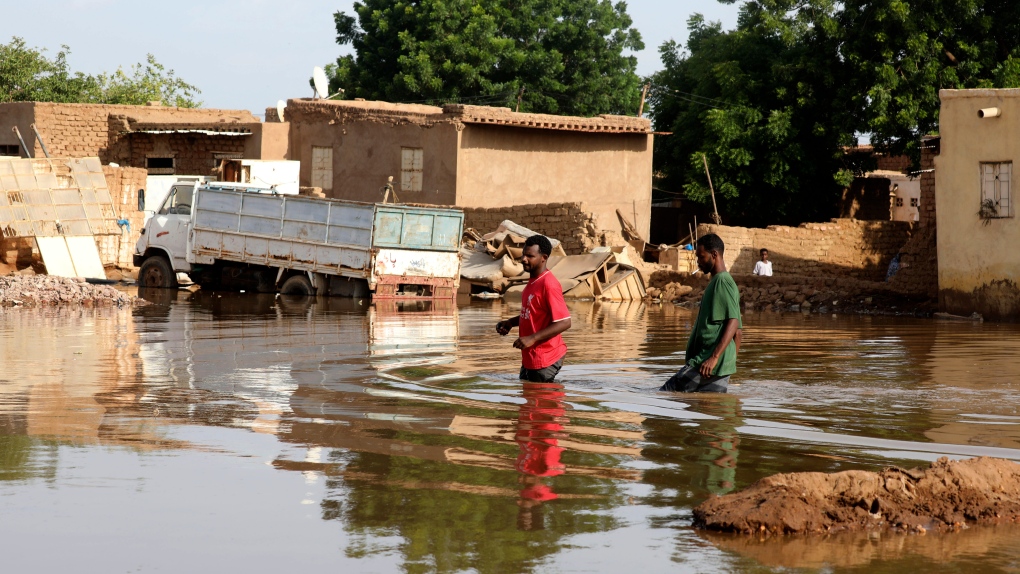 People wade through of a flooded road in the town of Omdurman, about 18 miles (30 km) northwest of the capital Khartoum, Sudan, Wednesday, Aug. 26, 2020. (AP Photo/Marwan Ali)

CAIRO -- Flash floods in Sudan have killed more than 100 people this summer and inundated over 100,000 houses, threatening even a famous archeological site near the capital of Khartoum and compounding the country's already dire economic situation, officials said.

The floodwaters this week entered the ancient royal city of the Kushite kings known as the Island of Meroe, a UNESCO World Heritage site, said Abdel-Hai Abdel-Sawy, head of the archeological exploration department at Sudan's National Corporation of Antiquities and Museums.

The site -- called the "Island of Meroe" because of its proximity to the Nile River -- was the heartland of the Kingdom of Kush, a major power in the ancient world from the 8th century B.C. to the 4th century.

Abdel-Sawy told The Associated Press on Friday that parts of the ancient site, located 200 kilometres (125 miles) northeast of Khartoum, have become submerged. Workers have pumped the water and erected sandbag barricades to protect the site, he added.

"But we were not able to reach some points at the site because of the flooding water ... (or) evaluate indirect damage to the site, particularly such artifacts under the ground," he said.

Flash floods, which have struck much of Sudan since late July, forced authorities earlier this month to declare the country a natural disaster area and impose a three-month state of emergency.

The Interior Ministry said that as of Thursday, at least 103 people have died because of the floods and at least 500 have been injured. More than 550,000 people in all but one of Sudan's 18 provinces have been affected, including Khartoum and North Darfur.

Seasonal heavy rainfall, mostly in neighbouring Ethiopia, have swelled the Nile, causing water levels to rise 17 and a half meters, or about 57 feet, in August, the highest level in almost a century, according to the Sudanese Irrigation Ministry.

Battered by decades of U.S. sanctions, civil war and mismanagement under former autocrat Omar al-Bashir, Sudan's inflation reached over 100% in recent months. Foreign debt is close to US$60 billion and there are widespread shortages of essential goods, including fuel, bread and medicine.

Also on Thursday, authorities declared an economic emergency following a dramatic plunge in the value of the national currency, said acting Finance Minister Hiba Mohammed Ali. She said the transitional government will "not tolerate those who are playing with the food of people."

The Sudanese pound has been trading on the black market at 250 pounds to the dollar, despite its official rate of 57 pounds to $1.

Information Minister Faisal Saleh said the "deterioration of the currency has been dramatic" and accused loyalists of al-Bashir, ousted in a popular uprising last year, of trying to undermine Sudan's transition to democracy.