Students face off against hundreds of police in Myanmar 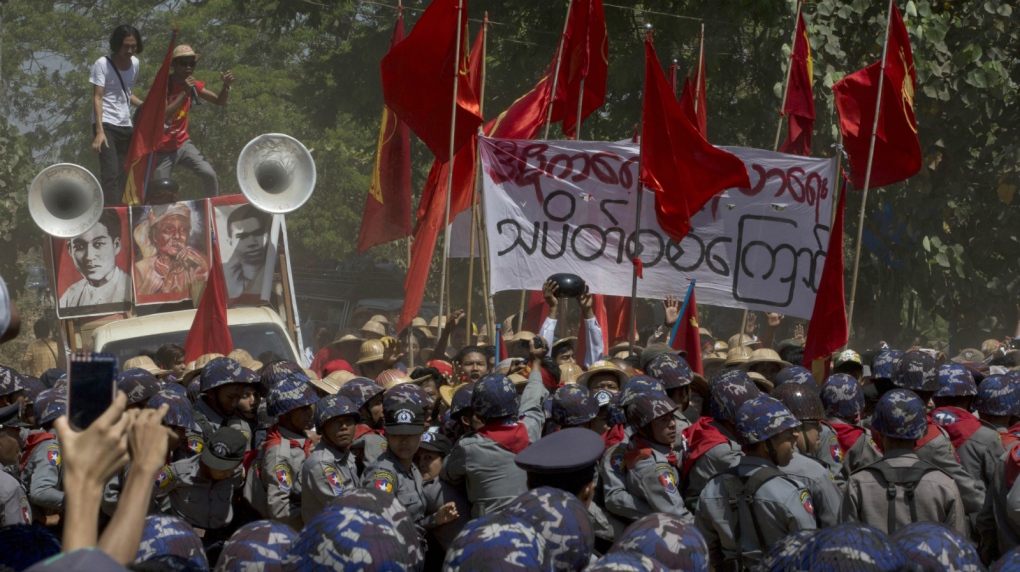 Student protesters try to break a police human chain blocking them from a protest march in Letpadan, north of Yangon, Myanmar on March 3, 2015. (AP / Gemunu Amarasinghe)

LETPADAN, Myanmar -- Hundreds of student protesters vowed to camp out in the middle of a major road in Myanmar on Tuesday night after police locked arms, forming a human chain to block their march to the country's largest city.

Tensions were building in the standoff outside a monastery in the town of Letpadan, 140 kilometres from Yangon. Three water cannon trucks were parked on the side of the road together with several trucks filled with riot gear.

The demonstrators -- who have been rallying for more than a month and gaining public sympathy -- want the government to scrap a newly passed education law that they say curbs academic freedom.

The law, passed by parliament in September, puts all decisions about policy and curriculum in the hands of a group largely made up of government ministers. Students say the law undermines the autonomy of universities, which are still struggling to recover after clampdowns on academic independence and freedom during years of dictatorship.

Police have repeatedly warned that they will take action to "restore law and order" if the protesters try to bring their rally to Yangon.

Neither the police nor the students appeared ready to back down Tuesday.

Security forces earlier in the day formed a human chain around the students four layers deep. They vowed to crack down unless the protesters dispersed, but a 4 p.m. deadline passed without incident.

The students punched their fists into the air and shouted "Let us march," "Reform the education system" and "This is our right." Some town residents stood behind them, offering encouragement.

Myanmar began moving from a half-century of military rule toward democracy in 2011, but critics say the reforms that marked President Thein Sein's early days in office have either stalled or the government has been retreating from them.

The threat of an expanded protest is sensitive in Myanmar, in part because students were at the forefront of pro-democracy protests in 1988 that were crushed in a bloody military crackdown.