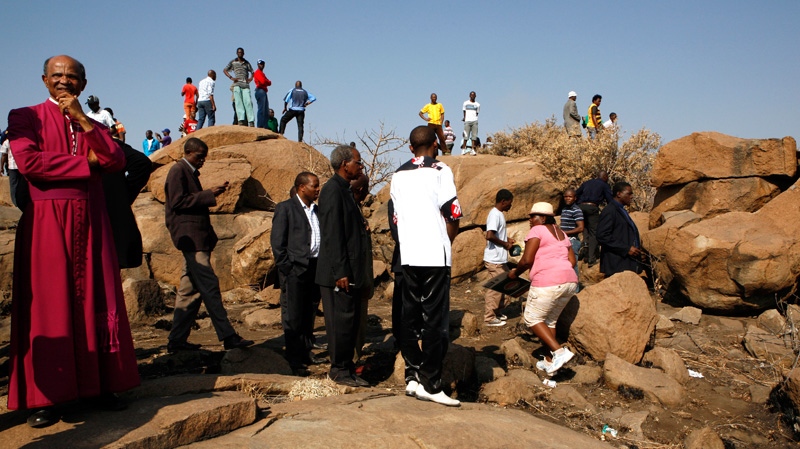 Church leaders visit the scene where miners were shot and killed at the Lonmin mine near Rustenburg, South Africa, Monday, Aug. 20, 2012. (AP / Themba Hadebe)

MARIKANA, South Africa -- Striking miners remained defiant Monday, four days after police shot to death 34 of their compatriots, with at least half the strikers staying off the job and dozens of others singing in a paddy wagon on their way to court.

The Lonmin PLC platinum mine extended its ultimatum by a day, saying strikers have until Tuesday to return to work or get fired. The mine said it resumed operations Monday with 30 per cent of its workforce.

Women searched for loved ones missing since Thursday's shootings, with many gathered outside a courthouse in hopes their husbands, brothers and sons are alive and among 259 miners awaiting trial. The court decided Monday to continue the hearing Aug. 27, with the miners remaining in custody.

Nombulelo Jali wept hysterically in front of the court and said she could not find her 40-year-old husband Themba Khalo Jali. She said he had been arrested on Thursday.

"We have frantically searched everywhere and we can't locate him. Police took him," 37-year-old Jali said through tears to a reporter from the South African Press Association.

A chorus of wails erupted as trucks carrying the arrested miners arrived, with some women praying and others crying loudly. The mineworkers were singing in the police trucks.

Police instructed the protesters to leave the court building and they assembled in the street outside, singing and dancing in front of police officers holding shields to barricade the court entrance.

Mark Munroe, executive vice president of Lonmin, said 30 per cent of the 28,000 workforce reported for duty at the mine Monday, including fewer than half of the 3,000 rock drill operators, called RDOs, who were striking for higher wages amid a dispute pitting the country's oldest and biggest trade union against a startup.

A horde of politicians including 10 Cabinet ministers descended on the Marikana mine about 70 kilometres northwest of Johannesburg on Monday. The ministers came to help bereaved families make burial arrangements and get counseling. A group of opposition politicians from several parties made the trip to investigate the scene of the killings that the South African Civil Society called "the horror of South Africa's first post-apartheid massacre."

President Jacob Zuma announced a week of national mourning starting Monday and urged the country to "reflect on the sanctity of human life" and "unite against violence from whatever quarter." Ten people, including police officers and mine workers, had died in violence at the mines in the days before the shootings.

He has instigated a judicial commission of inquiry into what happened on Thursday, when police say they acted in self-defense to fire a barrage of live bullets at a group of charging miners including one armed with a pistol and others with homemade spears and clubs.

National Police chief Riah Phiyega drew fire from opposition politicians for the defense of her officers, whom she absolved of all guilt in the shootings at a funeral Sunday for one of two police officers hacked to death by the strikers.

"It was the right thing to do," Phiyega said, though "We are sorry that lives were lost."

Lonmin said in a statement Monday: "Lonmin can confirm that work at its Marikana operations resumed today as significant numbers of employees returned to work." The company's shares have taken a hard hit since the strikes that started more than 10 days ago.

Lonmin had warned Sunday that Monday's "final ultimatum provides RDOs with a last opportunity to return to work or face possible dismissal."

However, the company issued a statement on Monday announcing "those illegal strikers who did not return to work this morning will not be dismissed and have been allowed an extra day in light of current circumstances."

Last year, Lonmin fired all 9,000 workers when a similar dispute over union representation stopped work at its nearby Karee mine, then asked them all to reapply and rehired all but a few considered responsible for the strike.

The Black Management Forum, a leadership organization promoting South African economic progress, issued a statement on Monday calling for an inquiry into the "issue of exploitative wages versus executive pay."

The organization said the investigation should include, among others, an inquiry into shareholders' attitudes toward mine safety.

A civil society organization, the Hola Bon Renaissance Foundation, warned on Monday that mining companies failing to settle issues internally could strengthen calls for the nationalization of natural resources.

Lonmin has lost 18.5 per cent of its share value since the strike began Aug. 10. Since violence broke out shares have fallen by as much as 20 per cent, at one time wiping some 390 million pounds ($610 million) off the company's market value.