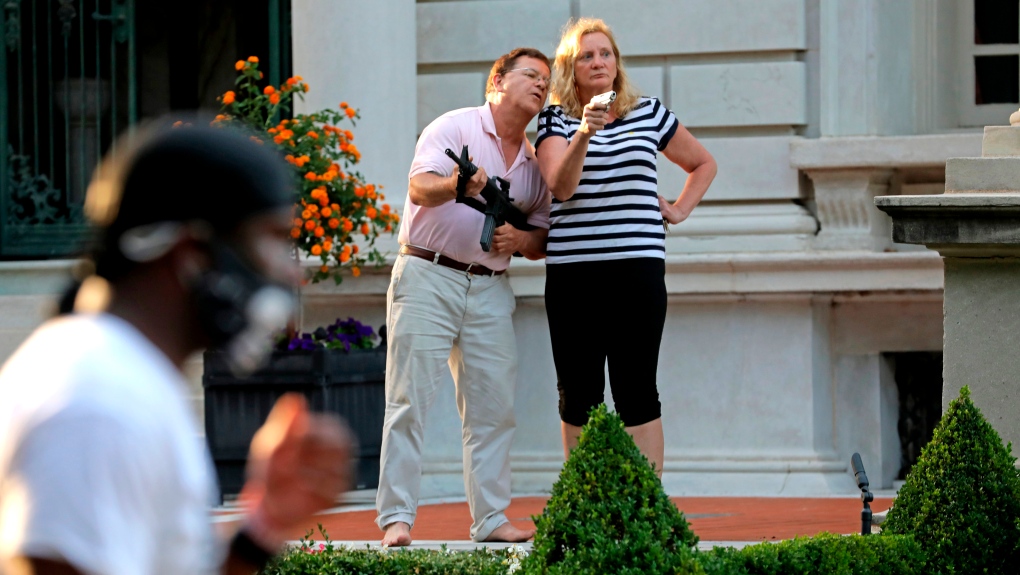 In this June 28, 2020 file photo, Mark and Patricia McCloskey emerged from their St. Louis mansion with guns after protesters walked onto their private street. (Laurie Skrivan/St. Louis Post-Dispatch via AP, File

ST. LOUIS -- A St. Louis couple who gained notoriety for pointing guns at social justice demonstrators pleaded guilty Thursday to misdemeanor charges, but the man left the courthouse defiantly pledging to "do it again" if faced with the same circumstances.

When several hundred demonstrators marched past their home in June of 2020, the couple waved weapons at them. They claimed the protesters were trespassing and that they feared for their safety.

The McCloskeys, both of them lawyers in their 60s, wore blue blazers and spoke calmly in answering questions from Judge David Mason during Thursday's hearing. Mason asked Mark McCloskey if he acknowledged that his actions put people at risk of personal injury. He replied, "I sure did your honour."

Mark McCloskey, who announced in May that he was running for a U.S. Senate seat in Missouri, was unapologetic after the hearing.

"I'd do it again," he said from the courthouse steps in downtown St. Louis. "Any time the mob approaches me, I'll do what I can to put them in imminent threat of physical injury because that's what kept them from destroying my house and my family."

The McCloskeys' defence lawyer, Joel Schwartz, said after the hearing the couple had hoped to raise money by donating Mark's rifle to charity, but acknowledged that it was an unusual request.

Because the charges are misdemeanors, the McCloskeys do not face the possibility of losing their law licenses and can continue to own firearms.

On the courthouse steps after the hearing, special prosecutor Richard Callahan said the misdemeanor plea was reasonable noting the McCloskeys called the police, no shots were fired and no one was hurt.

The June 28, 2020, protests came weeks after George Floyd's death under a Minneapolis police officer's knee. Mark McCloskey emerged with an AR-15-style rifle, and Patricia McCloskey waved a semiautomatic pistol, according to the indictment. Cellphone video captured the confrontation. No shots were fired and no one was hurt.

The McCloskeys were indicted by a grand jury in October on felony charges of unlawful use of a weapon and evidence tampering. Callahan later amended the charges to give jurors the alternative of convictions of misdemeanor harassment instead of the weapons charge. Under that alternative, the evidence tampering count would be dropped.

An investigation by St. Louis Circuit Attorney Kim Gardner's office led to the initial indictments -- and harsh backlash from several Republican leaders. Then-President Donald Trump spoke out in defense of the couple, whose newfound celebrity earned them an appearance via video at the Republican National Convention.

Republican Missouri Gov. Mike Parson has said that if the McCloskeys are convicted, he'd pardon them. A spokeswoman for Parson didn't immediately respond to a request for comment after the hearing.

Callahan, a longtime judge and former U.S. attorney, was appointed special prosecutor after a judge in December ruled that Gardner created an appearance of impropriety by mentioning the McCloskey case in fundraising emails before the August Democratic primary. Gardner went on to win reelection.