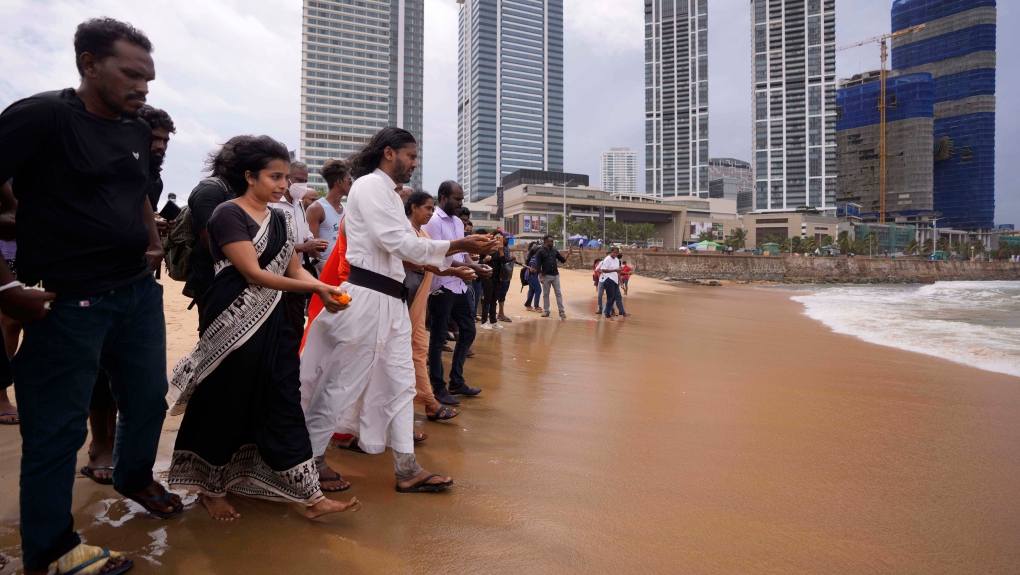 Protesters gathered outside the president's office floated flowers in the nearby sea and prayed for all those who died in the 26-year civil war, including Tamil civilians, Tamil rebels and government soldiers.

While grand state events have been held almost every year since the war ended in 2009 to remember and celebrate the soldiers, this is the first time an event that also remembers Tamils is being held by mostly Sinhalese in the country's capital, Colombo.

"I am a Sinhalese by birth. Today we held a memorial for all those who were killed 13 years ago, Sinhala, Muslim, Hindu and everybody as a result of state terrorism and terrorism by non-state groups," said Sumeera Gunasekara, a social media activist who participated in the event.

"There are still those who are grieving because of these events and as a Sinhalese I have a right to share in their grief, because I believe in the religion of humanity more than any other."

Actress Kaushalya Fernando said she came to remember the victims of a war created and mishandled by politicians.

"The significance of this place is that we are not here as different ethnic groups but as Sri Lankans."

The protesters also shared rice porridge, the only food the people could have in the final stages of the fighting because of heavy blockade of supplies.

The civil war killed 100,000 people, according to conservative United Nations estimates. The actual number is believed to be much higher. A report from a U.N. panel of experts said at least 40,000 Tamil civilians were killed in the final months of the fighting alone.

Since Sri Lankan troops defeated the Tamil Tiger rebels in 2009, Sri Lankan authorities had widely prohibited Tamils from publicly remembering their family members and have denied allegations that Tamil civilians were killed.

Sri Lankans have been protesting for more than a month demanding the resignation of President Gotabaya Rajapaksa, holding him responsible for the country's worst economic crisis in recent memory.

Gotabaya Rajapaksa played a key role as a top defense strategist to his brother, former Prime Minister Mahinda Rajapaksa, who is credited with leading a military campaign to defeat the rebels.

The two leaders were hailed as heroes by the Sinhalese but allegations of mishandling the economy and corruption has led to their fall from grace.

Mahinda Rajapaksa resigned as prime minister last week amid violent protests and Gotabaya Rajapaksa has been staying in his fortified residence for more than a month. He has been forced to take a backseat, having appointed a new prime minister to handle the economy.

Sri Lanka, near bankruptcy, has suspended up to $7 billion of foreign loan payments due to be repaid this year because of a foreign currency crisis. The country must repay $25 billion as foreign debt by 2026 out of a total $51 billion.

It has led to limited imports with no gasoline in filling stations. Other fuel, cooking gas, medicine and foods are in short supply, forcing people to stay in long lines to buy the limited stocks.

Accessing abortion still has its limits in Canada, advocate says

Leading economic powers conferred by video link with Ukrainian President Volodymyr Zelenskyy on Monday as they underscored their commitment to Ukraine for 'as long as it takes' with plans to pursue a price cap on Russian oil, raise tariffs on Russian goods and impose other new sanctions.

Digital censors quickly deleted a hashtag 'the next five years' Monday as online discussion swirled in response to reported remarks of Beijing's Communist Party secretary saying that the capital city will normalize pandemic prevention controls over the course of the next five years.