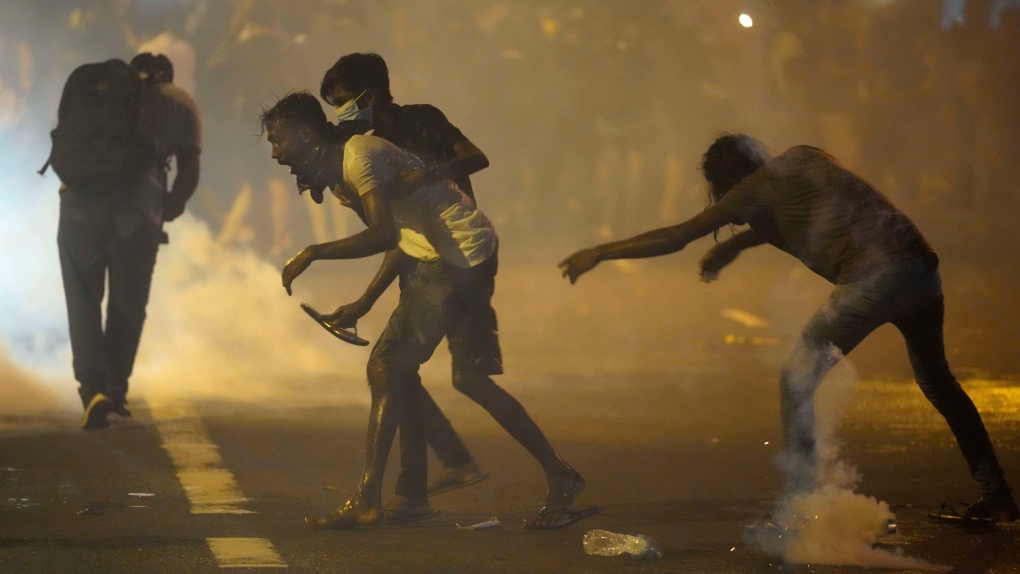 Police in Sri Lanka used tear gas and a water cannons Saturday to disperse demonstrators trying to approach the president's office to demand he resign over the country's ongoing economic crisis.

The demonstrators were rallying to mark the 50th day of protests in which they have camped outside President Gotabaya Rajapaksa's office. Police broke up the rally and briefly detained three people before releasing them.

Sri Lanka is nearly bankrupt, having defaulted on its foreign loans, and is battling acute shortages of essential goods like cooking gas, fuel and medicines. People have been forced to wait for hours in long lines to try to buy goods and many still go empty handed.

The country's foreign currency reserves have also dwindled to only enough to purchase two weeks of needed imports.

Authorities announced last month that they are suspending repayment of nearly $7 billion foreign debt to be repaid this year. Sri Lanka has to pay up $25 billion through 2026. Total foreign debt of the Indian Ocean island nation is $51 billion.

The protesters say the primary responsibility for the economic crisis rests with Rajapaksa and his family, who they accuse of corruption and mismanagement.

Violence erupted countrywide on May 9, when Rajapaksa supporters attacked peaceful protesters. Nine people including a governing party lawmaker were killed and homes of sitting ministers were burnt down. It nearly dismantled the Rajapaksa dynasty after the president's brother, then Prime Minister Mahinda Rajapaksa, resigned amid the violence.

Three of president's siblings and a nephew had already resigned from their Cabinet posts.

New Prime Minister Ranil Wickremesinghe has said that he will have an economic reform plan ready within two weeks to seek approval from the International Monetary Fund for a bailout package.