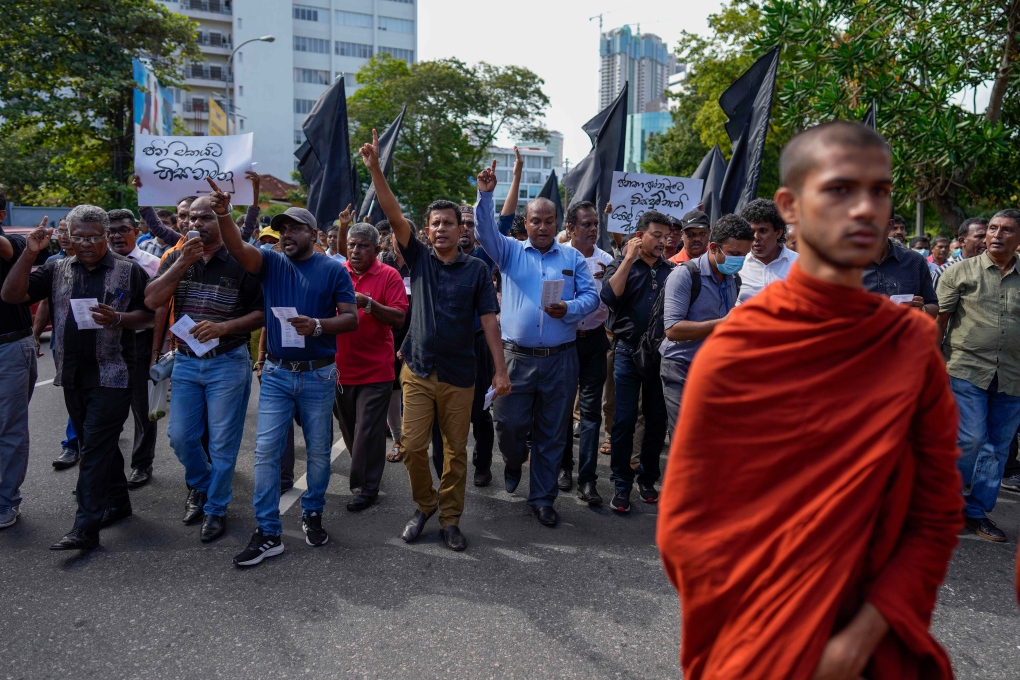 Trade union and civil society activists led by leftists' People Liberation Front shout slogans denouncing president Ranil Wickremesinghe as they march in streets in Colombo, Sri Lanka on Aug. 9, 2022. Hundreds of Sri Lankans Tuesday rallied against a government crackdown and the use of emergency laws against those who protested peacefully against the country's worst economic crisis in recent memory. (AP Photo/Eranga Jayawardena)
COLOMBO, Sri Lanka -

Sri Lanka's justice minister submitted a proposed constitutional amendment to Parliament on Wednesday that would clip the powers of the president, a key demand of protesters calling for political reforms and solutions to the country's worst economic crisis.

The action came as former President Gotabaya Rajapaksa, who fled violent anti-government protests last month, was reportedly seeking to enter Thailand from his temporary exile in Singapore. He fled Sri Lanka last month after thousands of angry protesters stormed his official residence, holding him responsible for the country's economic woes.

A Thai Foreign Ministry spokesperson said Rajapaksa would be allowed entry but had not asked for political asylum. However, Thai Prime Minister Prayuth Chan-ocha said Rajapaksa was seeking asylum in a third country, which he did not identify.

In Sri Lanka's capital, Colombo, Justice Minister Wijayadasa Rajapakshe presented a bill that would transfer some presidential powers -- including those to appoint independent election commission members, police and public service officials, and bribery and corruption investigators -- to a constitutional council comprising lawmakers and respected non-politicians. The council would then recommend candidates for appointments that the president could choose from.

Under the proposed amendments, presidents would only be able to appoint chief justices, other senior judges, attorney generals and central bank governors on the recommendation of the council. The prime minister would recommend appointments to the Cabinet and the president would not be allowed to hold any ministry positions except defense.

The bill, which will undergo debate, must be approved by two-thirds of Sri Lanka's 225-member Parliament to become law.

If passed into law, the amendments would reinstate democratic reforms made in 2015. Rajapaksa reversed those reforms and concentrated power in himself after being elected in 2019.

Current President Ranil Wickremesinghe, who succeeded Rajapaksa, has promised to limit the powers of the presidency and strengthen Parliament in response to the protesters' demands.

Protesters blame mismanagement and corruption by the Rajapaksa family for the economic crisis that has led to serious shortages of essentials such as medicines, food and fuel. The island nation is negotiating with the International Monetary Fund for a bailout program.

Rajapaksa's older brother, Mahinda Rajapaksa, resigned as prime minister in May. Three other close family members resigned from their Cabinet positions before him.

Thai spokesperson Tanee said in a text message to journalists that under a 2013 bilateral agreement, Rajapaksa is able to enter Thailand without a visa for 90 days because he holds a Sri Lankan diplomatic passport.

"The stay is temporary in nature with the aim of onward travel," Tanee said. "No political asylum has been sought."

Thai Prime Minister Prayuth, speaking to reporters, said he was aware of Rajapaksa's intended visit and that it was allowed for humanitarian reasons because the former president was seeking asylum in a third country. He did not elaborate.

S. Khan, director general of public diplomacy at Sri Lanka's Foreign Ministry, said she had no comment about the Thai statements.

Last month, a human rights group filed a criminal complaint with Singapore's attorney general seeking Rajapaksa's arrest for alleged war crimes during Sri Lanka's civil war. He was was defense secretary during the conflict, which ended in 2009.

The International Truth and Justice Project --- an evidence-gathering organization administered by a South Africa-based nonprofit foundation --- said its lawyers filed the complaint requesting Rajapaksa's immediate arrest. The complaint alleges Rajapaksa committed grave breaches of the Geneva Conventions during the civil war and that they are subject to domestic prosecution in Singapore under universal jurisdiction.

Sri Lanka's civil war, in which Tamil Tiger rebels fought to create an independent state for ethnic minority Tamils, resulted in the deaths of 100,000 people, according to conservative United Nations estimates. The actual number is believed to be much higher. A report from a UN panel of experts said at least 40,000 Tamil civilians died in the final months of fighting alone.

This story corrects that the director general of public diplomacy at Sri Lanka's Foreign Ministry is a female.