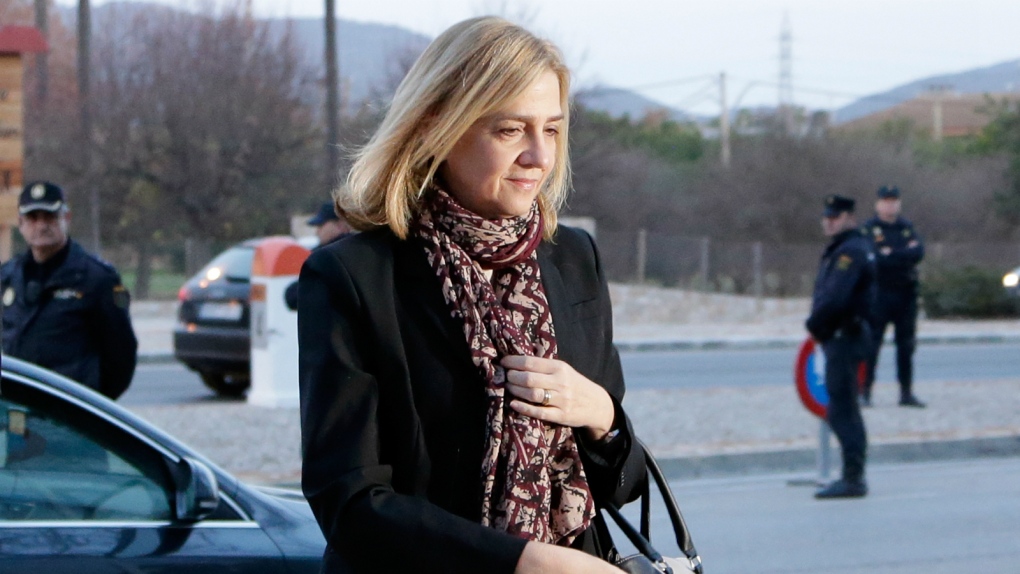 MADRID -- Spain's Princess Cristina was found not guilty in a tax fraud case Friday, while her husband was convicted and sentenced to more than six years in prison.

A panel of judges ruled that Cristina, the sister of King Felipe VI, will be required to pay nearly 265,000 euros (more than $280,000) in fines because the court considers that she indirectly benefited from the fraud.

Her husband, Inaki Urdangarin, was found guilty of evading taxes, fraud and various other charges. He was sentenced to six years and three months in prison in a decision that can be appealed to the Supreme Court.

The trial centred on accusations that Urdangarin used his former title, Duke of Palma, to embezzle about 6 million euros ($6.6 million) in public funds for the non-profit Noos Institute.

The institute organized conferences and sports-related events and was run with a partner, Diego Torres, who was sentenced to eight years and a half in jail in Friday's ruling by a provincial court in Palma de Mallorca, in the Balearic Islands.

Among the companies they used was Aizoon, a real estate consulting company jointly owned by Cristina and Urdangarin.

A lawyer with Cristina's defence team, Miquel Roca, said that the princess was "satisfied for the acknowledgement of her innocence" but that she was still convinced that her husband wasn..t guilty.

"If we believed in the judicial system when the princess was made to sit in the dock, I think citizens can trust in it when she's absolved," Roca told reporters in Barcelona.

A spokesman for the Royal House told Spanish media that the royal family respected the court's decision.

There were no immediate comment from Felipe and Queen Letizia, who received news of the ruling during a visit to a museum in Madrid with the Hungarian president.