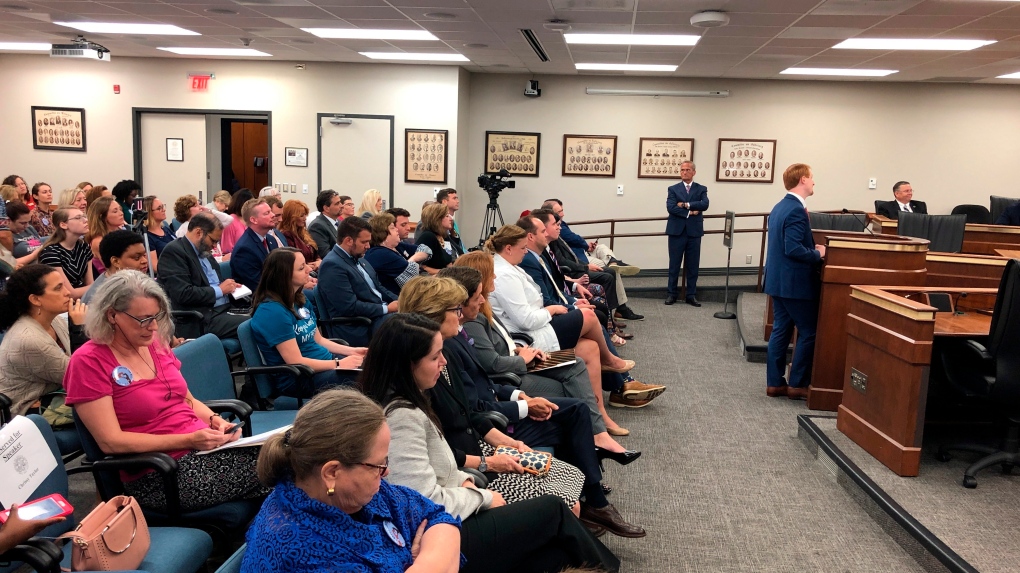 Rep. Josiah Magnuson speaks in favor of a bill banning abortion after a heartbeat is detected on Tuesday, Sept. 10, 2019, in Columbia, S.C. A South Carolina Senate subcommittees was hearing daylong testimony on the bill. (AP Photo / Jeffrey Collins)

COLUMBIA, S.C. -- A small group of South Carolina senators held a daylong hearing Tuesday on whether South Carolina should join about a half-dozen other states in banning nearly all abortions , but the Southern state might not be ready to follow some of its conservative compatriots.

About 25 people spoke during the carefully scripted hearing Tuesday before breaking for lunch. More speakers were planned for the afternoon, with the Senate subcommittee trying to evenly divide the speakers by those for and against the bill, which would ban almost all abortions after a fetal heartbeat is detected, around six weeks into pregnancy.

The bill easily passed the House in April and Gov. Henry McMaster enthusiastically supports it. But some backers aren't sure it can get the two-thirds support likely needed to overcome procedural hurdles in the Senate when the Legislature returns Jan. 14.

Heartbeat abortion bills have been passed in recent years in Louisiana , Georgia , Kentucky , Mississippi and Ohio . Missouri approved a ban on abortions after eight weeks of pregnancy and Alabama lawmakers simply outlawed all abortions.

Abortion is legal under federal law, which supersedes state law, and lawsuits have been filed against the state measures. The laws' backers are hoping to get a case before the U.S. Supreme Court to challenge the court's 1973 Roe v. Wade ruling that legalized abortion nationwide. The push comes amid rising optimism among conservatives that the restrictions might prevail in the reconfigured Supreme Court that includes President Donald Trump's appointees Neil Gorsuch and Brett Kavanaugh.

Subcommittee chairman Sen. Shane Martin said there would be no vote on the bill Tuesday. The Republican from Spartanburg County said he wanted to hold public hearings before all lawmakers returned because the Senate has a busy calendar that includes tackling a wide-ranging overhaul of public education and deciding whether to sell state-owned utility Santee Cooper, which is billions of dollars in debt after partnering on two nuclear plants that were abandoned before they generated a watt of power.

South Carolina is a conservative state with a history of past efforts to restrict abortion. But momentum on the current bill has stalled as the state's long shift from Democratic to Republican domination has finally peaked.

"This comes down to a math question: Do you have the votes to do it?" said Senate Majority Leader Shane Massey.

Democrats in 2018 altered a much less restrictive ban on abortion into a ban on almost all abortions, putting less conservative Republicans on the spot. The bill failed because Republicans could not muster the two-thirds vote needed to end a filibuster and bring the bill to a vote.

Since then, Republicans have lost a Senate seat. They need 27 of their 28 members on board and one GOP senator is philosophically against ever voting to end a filibuster, Massey said.

"I have to have every single Republican left to vote on every part of that bill. If we can be successful, let's go," said Massey, a Republican from Edgefield. "But let's not waste days on something we can't do."

Republican senators plan to meet a few weeks before the 2020 session starts and figure out if they have the votes, Massey said.

Tuesday's hearing was polite and respectful despite the 100 or so people who packed the room. There were no outbursts or demonstrations as people spoke. Martin asked senators to limit their questions so as many people could speak as possible.

"Science and common sense tells us a heartbeat signifies life. If you sit here quietly and listen carefully, you may hear and even feel your God-given heartbeat inside your own chest," said Mitch Prosser, a pastor from Clover.

Several women who opposed the bill said they were angry about having to share their personal stories of abortion with strangers but did so to protect the ability of other women to have the procedure. Gynecologists shared the stories of women who confronted medical emergencies during abortions that could fall into gray areas under the proposal.

"The need for abortion will not go away if this bill is passed. Passing this is likely to increase the risk of unsafe abortions," said Dr. Judith Burgis, an obstetrician and gynecologist in Columbia.