BEIJING  -  This weekend marks the Chinese New Year, a time when the world’s second largest economy grinds to a halt and millions empty from cities to villages and towns to visit family.  Airports and railways stations have been overrun with travellers absorbed into this ‘Great Migration’.

Beijing right now is curiously quiet and that says a lot in a city that normally has the worst traffic on the planet. That factories are idle also means the notoriously crappy air is, dare I say, breathable.

The change in the lunar calendar ushers in Year of the Snake, one of the less popular zodiac signs that lacks the marketing power of the dragon, ox or rabbit.  Merchandisers tried to dress up stuffed snakes with bow-ties or funny glasses but customers are not fooled:  Snakes are scary.

The most traditional gift is hong bao, a ‘red packet’ that is stuffed with cash. But retailers also promoted bracelets or talismans in the form of a snake, or a snake featured on a mug, t-shirt or keychain. Anything made with snakeskin was discouraged for fear of, well, angering the snake.

It is also what is called a ‘blind year’ because it does not include the first day of spring.  On the lunar calendar it fell on February 4 this year and the New Year is February 10. So people rushed to get married or have babies in the soon-to-be gone Year of the Dragon because it enjoyed two first days of spring – at both the beginning and the end.

Still, the New Year -- or Spring Festival as it is called here -- is the most important holiday of the year, when the days and nights explode with colourful parades, costumes and fireworks.

And on Saturday evening a billion people will be watching state broadcaster CCTV’s annual Lunar New Year gala. A billion people!  It is a Dick Clark-style spectacle that features some of the biggest Chinese performers.

For 24 years the headliner was Peng Liyuan, a soprano who holds the rank of army general.  She retired from the show in 2007 when her husband, Xi Jinping, joined the Communist Party Politburo and he is set to officially become China’s president next month. Forecasters believe it is an auspicious transition as Xi was born in 1953, a Year of the Snake.

This year, however, marks the first time the gala’s main act is a foreigner.  As global superstars go there could be a lot of contenders. But in China, nothing says New Year quite like Celine Dion. She will perform (you guessed it) “My Heart Will Go On” and a duet in Chinese with a folk singer.  It is unknown how much the Canadian chanteuse will be paid for the appearance.

While some people (especially jaded ones) might question why a billion Chinese citizens would want to be serenaded by a song from a movie released 15 years ago, here it actually musters some logic.  China has a serious crush on “Titanic”. The state-run People’s Daily newspaper reported that the 3-D re-release of the movie last year brought in $156 million at box offices across the country.

(By way of personal experience I can also attest to baffling cases of Celine Dion infatuation among Palestinian militants, Libyan rebel fighters, and Afghan security guards.  Trust me.)

The CCTV gala will run four hours and feature comedy sketches, ballet, and traditional songs. However, the Global Times reports that a rival channel is staging a separate broadcast that will feature South Korean star, Psy, doing his Gangnam Style dance.

Regardless, it will all trigger pyrotechnics that will last much of the holiday and Beijing will not seem so quiet anymore.  Reports suggest one type of firework, the “Tokyo Big Bang”, will not be as popular this year out of concern of heightening tension with Japan.

Xin nian hao and Happy Year of the Snake! (You too, Celine.) 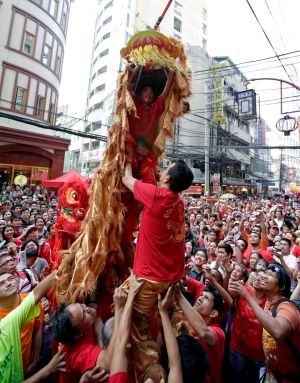 In Pictures: Celebrations Around the World