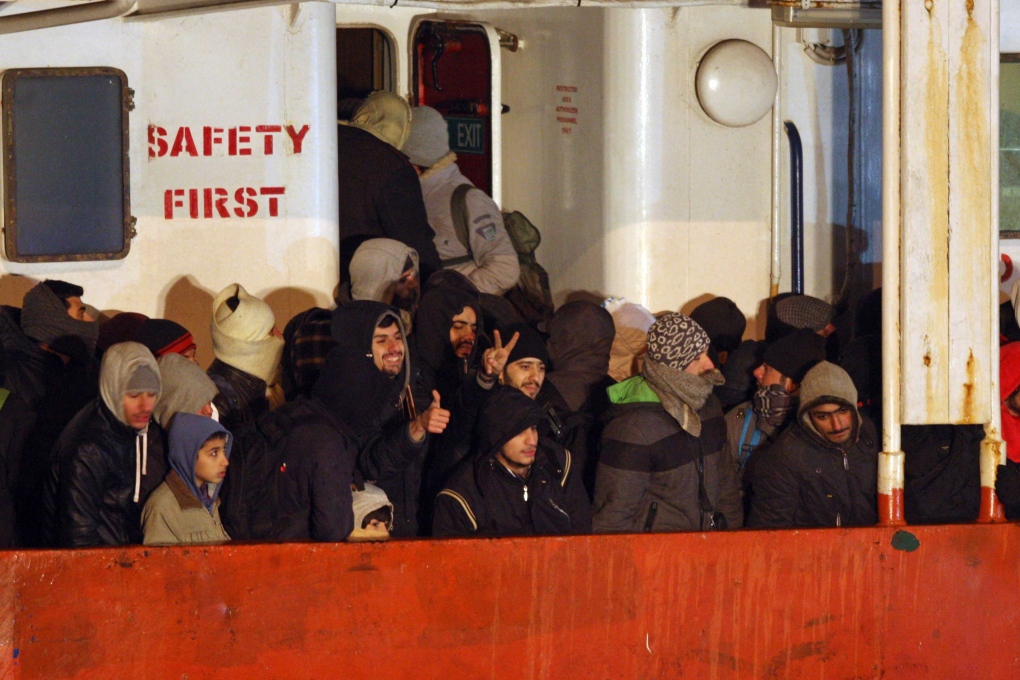 ROME -- Smugglers who bring migrants to Europe by sea appear to have adopted a new, more dangerous tactic: cramming hundreds of them onto a large cargo ship, setting it on an automated course to crash into the coast, and then abandoning the helm.

It happened twice this week in the span of three days, and both episodes could have ended in tragedy if the vessels had not been intercepted at sea.

In the latest such incident, the cargo ship Ezadeen was stopped with about 450 migrants aboard after smugglers sent it speeding toward the coast in rough seas with no one in command. Italian authorities lowered engineers and electricians onto the wave-tossed ship by helicopter to secure it, and the Icelandic Coast Guard towed it to the Italian port of Corigliano late Friday.

Children and pregnant women were among the migrants, most of whom were believed to be from war-ravaged Syria, Italian Coast Guard Cmdr. Filippo Marini said. The Sierra Leone-flagged ship apparently set sail from Turkey, he said.

Some of the migrants, most of them young men, watched wearily from the railings of the ship as they waited to disembark early Saturday. Several were wrapped in blankets against the freezing temperatures.

A large tent was set up at the dock so that the migrants could stop for food and water. Sky TG24 TV said that after their documents are checked, they will be sent to shelters. Their requests for asylum will be evaluated.

An Italian Coast Guard patrol plane had spotted the 66-meter (220-foot) Ezadeen on Thursday about 90 miles east of Italy's Calabria region and contacted it to see if it needed assistance.

"There was no crew, and one migrant, a woman, took the call," Marini said. "She said: 'We are alone. Please help us. We are in danger."'

Two days earlier, the Blue Sky M, a Mouldovan-flagged cargo ship carrying about 800 migrants, was similarly abandoned by smugglers who locked the ship on automatic pilot and set it on a collision course for a stretch of Italy's southern coast, authorities said.

Despite strong winds and high waves, Coast Guard officers were lowered onto the ship's bridge and managed to regain control of the steering about a half-hour before it was due to strike the coast, Marini said.

In the past few years, there have been increasing cases of smugglers overturning motorized dinghies or fishing boats and then speeding off in motorboats, leaving many migrants to drown. In other cases, they just fled, leaving their passengers to fend for themselves.

Marini said the latest incidents appear to represent an even more dangerous tactic.

"Certainly it's very dangerous because a ship with no one on the command bridge is like a bomb that will strike up against the reefs," he said.

It was not clear in either case if the smugglers jumped ship. Italian authorities said they were questioning passengers on the Blue Sky to see if any of the smugglers tried to pass themselves off as migrants.

In November, Greek authorities rescued nearly 600 migrants from a 70-meter (230-foot) cargo ship that lost engine power off the Greek island of Crete. Greek authorities arrested 19 of those on board as suspected smugglers. Most of the passengers were Syrians fleeing war in their homeland and were believed to have been charged $2,000 to $6,000 for passage to Italy.

There was no indication the vessel had been set on a collision course. But it illustrated what authorities said appears to be another recent development.

"The use of larger cargo ships is a new trend," said Vincent Cochetel, the U.N. refugee agency's Europe bureau director.

William Spindler, a spokesman for the U.N. agency, said on BBC radio that the organization is aware of four incidents in the past two months in which cargo ships full of hundreds of migrants were abandoned by their crews off the coast of Italy.

"The money involved is huge. People are desperate and they are willing to pay huge amounts of money for the privilege of travelling in these awful conditions and reaching Europe, where they hope to find safety and a better life," Spindler said.

The International Organization for Migration's spokesman, Joel Millman, said: "We've never seen over 1,000 in two days before." He noted that this time the migrants all seemed to be from Syria, rather than the usual mix of nationalities from countries stricken by war or poverty.

Annalisia Camilli in Rome, Elena Becatoros in Athens, Gregory Katz and Jill Lawless in London and Frank Jordans in Berlin contributed to this report.