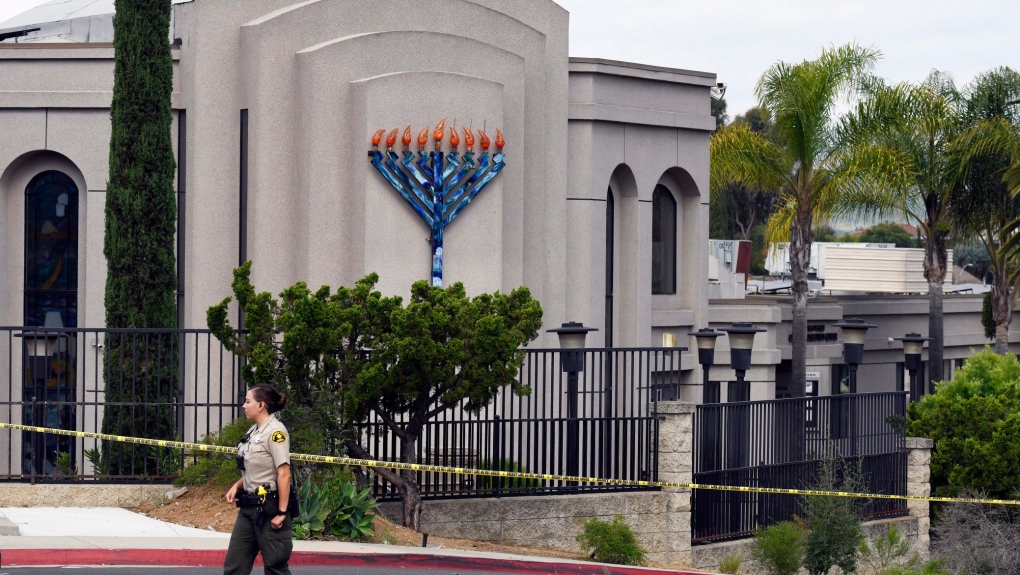 In this Sunday, April 28, 2019 file photo, a San Diego county sheriff's deputy stands in front of the Poway Chabad Synagogue in Poway, Calif. A man who was wounded after an anti-semitic shooter targeted the synagogue in April is suing the synagogue itself, saying the Chabad of Poway failed to use federal funds to institute security measures to protect worshippers. (AP Photo/Denis Poroy, File)

POWAY, CALIF. -- A man wounded in a shooting at a San Diego-area synagogue is suing the house of worship, alleging Chabad of Poway didn't use federal funds meant to hire security to protect worshipers, according to a newspaper report.

In the lawsuit obtained by Los Angeles Times, Almog Peretz claims the synagogue did not have proper security despite a rise in anti-Semitic attacks nationally and that it did not use a $150,000 grant to upgrade safety measures.

Officials at Chabad of Poway did not immediately respond to a request from the Times seeking comment on the lawsuit.

Prosecutors have charged John Timothy Earnest with one count of murder and three counts of attempted murder in the April 27 attack at Chabad of Poway.

According to court documents, Earnest -- 19 at the time -- walked into the synagogue on the last day of Passover, a Jewish holiday, and opened fire. Surveillance video of the lobby of the Chabad shows a man firing an assault-style rifle from just outside the front door, hitting Lori Gilbert-Kaye, 60, as she turned to run. She died at the doors to the sanctuary after being shot twice, according to a San Diego County deputy medical examiner.

Rabbi Yisroel Goldstein was the next person shot. Goldstein was wounded in both hands and lost the index finger on his right hand in the shooting.

San Diego County Deputy District Attorney Leonard Trinh said Earnest then turned toward a room where several people, including children, were inside and fired his weapon. Among those in the room were Peretz, 34, who was shot in the leg, and his 8-year-old niece, Noya Dahan, who was struck in her face and leg by bullet fragments.

In filing the lawsuit, Peretz said the synagogue breached its "duty of reasonable care" in protecting congregants, the Times said in its story Friday.

Chabad of Poway received $150,000 from the government in March because the synagogue "believed that it was at risk of an anti-Semitic attack on its congregants," according to the suit. But on the day of the attack, court documents show, the building's doors were unlocked and no guards, gates or other security measures were in place.

Peretz's attorney, Yoni Weinberg, said his client may be perceived negatively for including the synagogue in the lawsuit, but he said it's important to name everyone who may be at fault in the fatal attack.

"If we were only to have John Earnest in the lawsuit, changes would never get made," Weinberg said. "Hopefully this pressure ΓÇª influences them to make a change to protect their congregants and it influences other synagogues as well."