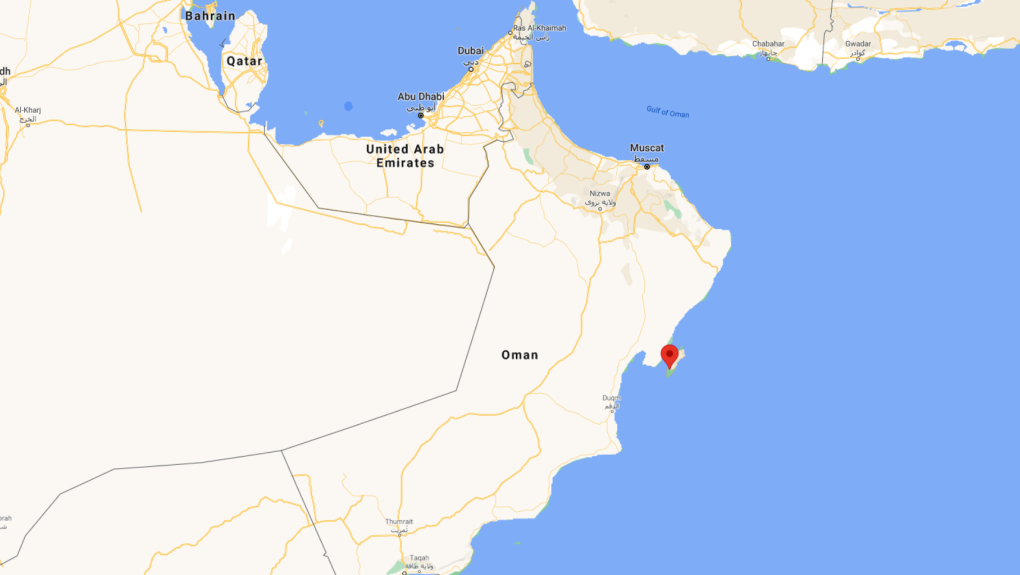 DUBAI, UNITED ARAB EMIRATES -- An attack on an oil tanker linked to an Israeli billionaire killed two crew members off Oman in the Arabian Sea, authorities said Friday, marking the first fatalities after years of assaults targeting shipping in the region.

No one immediately claimed responsibility for the Thursday night raid on the Liberian-flagged tanker Mercer Street. However, a U.S. official said it appears a so-called suicide drone was used in the attack, raising the possibility that a government or a militia group was behind it. Without providing evidence, Israeli officials alleged that Iran carried out the attack.

The U.S. Navy rushed to the scene following the attack and was escorting the tanker to a safe harbour, a London-based ship management company said Friday.

The assault represented the worst-known maritime violence so far in regional attacks on shipping since 2019. The U.S., Israel and others have blamed the attacks on Iran amid the unraveling of Tehran's nuclear deal with world powers. Iran now appears poised to take an even tougher approach with the West as the country prepares to inaugurate a hard-line protege of Supreme Leader Ayatollah Ali Khamenei as president next week.

The attack on Thursday night targeted the tanker just northeast of the Omani island of Masirah, over 300 kilometres southeast of Oman's capital, Muscat.

London-based Zodiac Maritime, part of Israeli billionaire Eyal Ofer's Zodiac Group, said the attack killed two crew members, one from the United Kingdom and the other from Romania. It did not name them, nor did it describe what happened in the assault. It said it believed no other crew members on board were harmed.

The U.K. government later confirmed that a British national "has died following an incident on a tanker off the coast of Oman."

The statement from Zodiac Maritime said that "at the time of the incident the vessel was in the northern Indian Ocean, traveling from Dar es Salaam to Fujairah with no cargo onboard," naming ports in Tanzania and the United Arab Emirates.

Satellite tracking data from MarineTraffic.com showed the vessel had been near where British officials said the attack occurred. However, the last signal the ship sent came early Friday morning.

Late Friday, Zodiac Maritime said the tanker was sailing under the control of her crew "to a safe location with a U.S. naval escort." The company did not elaborate. The U.S. Navy's 5th Fleet, which patrols the Mideast, did not respond to a request for comment.

British military's United Kingdom Maritime Trade Operations said an investigation was underway into the attack and that coalition forces were taking part.

A U.S. official, speaking on condition of anonymity to discuss the ongoing investigation, told The Associated Press that the attack appeared to have been carried out by a "one-way" drone and that other drones took part. The official said it wasn't immediately known who launched the attack and declined to elaborate.

Israeli officials, who similarly spoke on condition of anonymity as they weren't authorized to talkj to the media, blamed Tehran for the attack, adding that Israel's "campaign against (Iran) will continue."

Israel considers Iran to be its biggest threat, citing Tehran's hostile rhetoric, support for anti-Israeli militant groups and growing influence in the region.

The remarks came after an earlier report from private maritime intelligence firm Dryad Global referred to a drone sighting involving the vessel prior to the attack. Iran and Yemen's Tehran-backed Houthi rebels have in the past employed suicide drones -- unmanned aircraft loaded with explosives that detonate on impact with a target.

In a separate development, the Saudi-led military coalition battling the rebel Houthis in Yemen claimed later Friday that it had thwarted an attempted "enemy drone" attack on a Saudi merchant ship, Saudi Arabia's state TV reported, without offering further details. The coalition blamed the Iran-backed Houthis for threatening maritime security in the southern Red Sea near the crucial Bab al-Mandeb Strait. The strait is used for oil shipments from the Persian Gulf to Europe, as well as goods from Asia to Europe.

British maritime security firm Ambrey said the attack on Mercer Street had killed one of its team members, along with a member of the tanker's crew. The intelligence firm said it was working with authorities and offering support to the victim's family "at this incredibly sad time."

Omani officials did not respond to requests for comment. The sultanate sits on the eastern edge of the Arabian Peninsula and is along vital shipping routes for cargo and energy moving through the Strait of Hormuz, the narrow mouth of the Persian Gulf.

Israel did not publicly acknowledge the attack. Other Israel-linked ships have been targeted in recent months as well amid a shadow war between the two nations, with Israeli officials blaming the Islamic Republic for the assaults.

Israel meanwhile has been suspected in a series of major attacks targeting Iran's nuclear program. Also, Iran saw its largest warship recently sink under mysterious circumstances in the nearby Gulf of Oman.

Thursday's attack comes amid heightened tensions over Iran's tattered nuclear deal and as negotiations over restoring the accord have stalled in Vienna. The series of ship attacks suspected to have been carried out by Iran began a year after then-President Donald Trump unilaterally withdrew America from the accord in 2018.

Iranian media quoted foreign press reports on Thursday's attack but did not offer anything more. The attack came the night after U.S. Secretary of State Antony Blinken, speaking from Kuwait, warned Iran that talks in Vienna over the nuclear deal "cannot go on indefinitely."

This is the second time this month a ship tied to Ofer apparently has been targeted. In early July, the Liberian-flagged container ship CSAV Tyndall, once tied to Zodiac Maritime, suffered an unexplained explosion on board while in the northern Indian Ocean, according to the U.S. Maritime Administration.