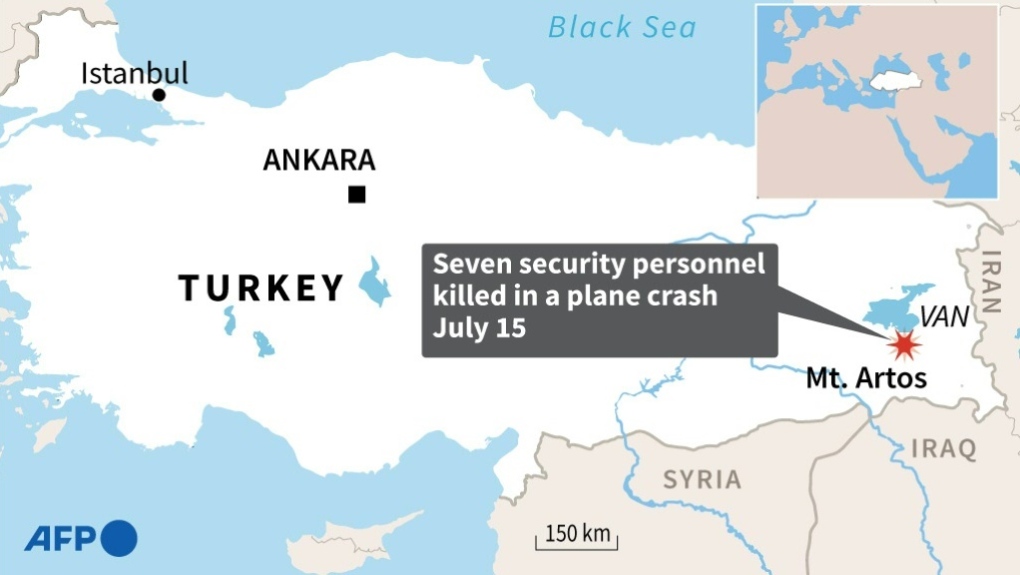 Map locating the province of Van where seven Turkish security personnel were killed in a plane crash on Wednesday. (AFP)

ANKARA, TURKEY -- Seven Turkish security personnel have died after their plane crashed into a mountain in the east of the country, state media reported Thursday.

Soylu later arrived to inspect the scene of the crash, according to pictures posted on his Twitter account that showed him alongside military personnel in rugged terrain.

The 2015-model plane had been conducting "reconnaissance and surveillance" in Van and the predominantly-Kurdish Hakkari province since Monday, Anadolu said.

Hakkari province borders Iraq and has seen numerous clashes between Turkish forces and Kurdish militants during a decades-long insurgency.

Van provincial governor Mehmet Emin Bilmez paid tribute to the seven "heroes" on Twitter and sent condolences to their families.

A government investigation into the incident was underway, he added.

Two Turkish pilots died in 2018 when a military training plane crashed during an exercise in the western province of Izmir.

Remote and mountainous Van province on Turkey's eastern border was struck by two avalanches in February that killed 41 people.

Earlier that month a magnitude 5.7 earthquake in neighbouring Iran injured dozens in the province.