Seoul: Missing South Korean official may be in North Korea 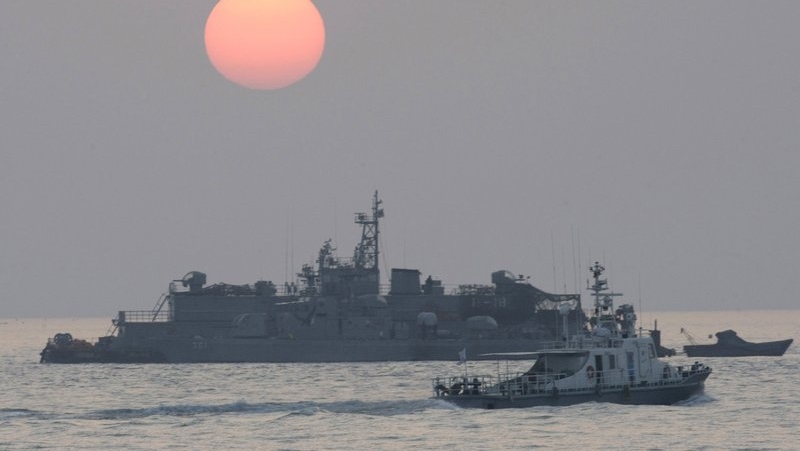 FILE - In this Dec. 22, 2010, file photo, a government ship sails past the South Korean Navy's floating base as the sun rises near Yeonpyeong island, South Korea. (AP Photo/Ahn Young-joon, File)

SEOUL, KOREA, REPUBLIC OF -- A South Korean official who disappeared off a government ship near the disputed sea boundary with North Korea this week may be in North Korea, South Korea's Defence Ministry said Wednesday.

The ministry said the 47-year-old official was aboard a government vessel that was checking on potential unauthorized fishing near a South Korean border island. Colleagues noticed the man was missing at lunch time and found only his shoes still on the vessel, prompting a so-far fruitless search involving aircraft and ships.

The Defence Ministry said in a statement it had information that the missing official was on North Korean shores on Tuesday afternoon. The ministry did not say how it obtained that information.

The ministry said officials will contact North Korea to ask about the missing official and take other steps to find more details.

The Ministry of Oceans and Fisheries, which was operating the vessel the man was on Monday, said 18 people were on board when the man went missing. It didn't provide information about the missing official.

More than 30,000 North Koreans have fled to South Korea in the past 20 years for political and economic reasons, but it's highly unusual for a South Korean national to defect to North Korea.

At the height of their Cold War rivalry, North Korea often forcibly towed South Korean fishing boats operating near the sea boundary into its waters, holding some of those on board and returning others. No such incidents have been reported in recent times.

Ties between the two Koreas remain strained amid a deadlock in nuclear talks between North Korea and the United States.